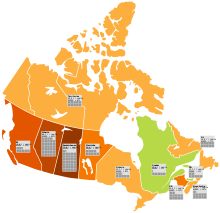 In Canada mitigation of anthropogenic climate change is being addressed more seriously by the provinces than by the federal government.

In 2000 Canada ranked ninth out of 186 countries in terms of per capita greenhouse gas emissions without taking into account land use changes. In 2005 it ranked eighth.[1]

Canada is a large country with a low population density, so transportation – often in cold weather when fuel efficiency drops – is a big part of the economy. About 25 per cent of Canada's GHGs come from trucks, trains, airplanes and, especially, cars. Commerce, residential fuel consumption and industry (excluding oil and gas) account for 24 per cent of the total, but much of those emissions come from equipment (mining trucks, front-end loaders) that do not get recorded in the transportation ledger. Another 14 per cent come from non-energy sources. The rest come from the production and manufacture of energy and power. The following table summarizes forecast changes to annual emissions by sector in megatonnes.

As Canada creates targets for GHG reductions, policymakers will likely zero in on the three areas – transportation, electricity generation and fossil fuel production – in which the greatest reductions are possible. Together, these activities account for nearly two-thirds of Canada's greenhouse gases. Efficiencies can be found there.

According to Canada's Energy Outlook, the Natural Resources Canada (NRCan) report,[2] NRCan estimates that Canada's GHG emissions will increase by 139 million tonnes between 2004 and 2020, with more than a third of the total coming from petroleum production and refining. Upstream emissions will decline slightly, primarily from gas field depletion and from increasing production of coalbed methane, which requires less processing than conventional natural gas. Meanwhile, emissions from unconventional resources and refining will soar.[3] However, the estimates for carbon emissions differ amongst Environment Canada, World Resources Institute and the International Energy Agency by nearly 50%. The reasons for the differences have not been determined.

Canada is a signatory to the Kyoto Protocol. However, the Liberal government that later signed the accord took little action towards meeting Canada's greenhouse gas emission targets. Although Canada committed itself to a 6% reduction below the 1990 levels for the 2008-2012 as a signatory to the Kyoto Protocol, the country has not yet implemented a plan to reduce greenhouse gases emissions. Soon after the 2006 federal election, the new minority government of Conservative Prime Minister Stephen Harper announced that Canada could and would not meet Canada's commitments. The House of Commons passed several opposition-sponsored bills calling for government plans for the implementation of emission reduction measures.

Canadian and North American environmental groups feel that Canada lacks credibility on environmental policy and regularly criticizes Canada in international venues. In the last few months of 2009, Canada's attitude was criticized at the Asia-Pacific Economic Co-operation (APEC) conference,[4] at the Commonwealth summit,[5] and the Copenhagen conference.[6]

The Canadian Wildlife Federation (CWF), one of the largest conservation organisations in the country, takes an active stance in lobbying on mitigation of global warming. According to CWF the organisation recognised the need for action in 1977.[7] It had published Checkerspot, a now discontinued biannual climate change magazine.

While the federal government was slow to develop a monitoring and credible reduction regime, several provincial governments have established substantial programs to reduce emissions on their respective territories. British Columbia, Manitoba, Ontario and Quebec have joined the Western Climate Initiative[8], a group of 7 states of the Western United States whose aim is to establish a common framework to establish a carbon credit market. These provinces have also made commitments regarding the reduction and announced concrete steps to reduce greenhouse gas emissions.

Reduction programs in other provinces, especially in Alberta, are much less developed, according to the environmental think tank, the Pembina Institute, who stresses that "Alberta's targets are dangerously weak and out of step with the large majority of jurisdictions in the industrialized world."[9]

Canada's two largest provinces, Ontario and Quebec, are wary of federal policies shifting the burden of greenhouse reductions on them in order to give Alberta and Saskatchewan more room to further develop their tar sands reserves, therefore chilling relations between the 13 provinces and territories.[10]

In Alberta there has been a trend of high summer temperatures and low summer precipitation. This has led much of Alberta to face drought conditions.[11] Drought conditions are negatively impacting on the agriculture sector of this province, mainly the cattle ranching area.[12] When there is a drought there is a shortage of feed for cattle (hay, grain). With the shortage on crops ranchers are forced to purchase the feed at the increased prices while they can. For those who cannot afford to pay top money for feed are forced to sell their herds.[13][14]

During the drought of 2002, Ontario had a good season and produced enough crops to send a vast amount of hay to those hit the hardest in Alberta. However this is not something that can be expected every time there is a drought in the prairie provinces.[15] This causes a great deficit in income for many as they are buying heads of cattle for high prices and selling them for very low prices.[16] By looking at historical forecasts, there is a strong indication that there is no true way to estimate or to know the amount of rain to expect for the upcoming growing season. This does not allow for the agricultural sector to plan accordingly.[17]

As Canada's most populated province, Ontario produces more anthropogenic greenhouse gases than any other province. Ontario's Nanticoke coal fired thermal power plant is believed to be the largest single source of anthropogenic carbon dioxide emissions in North America. The Ontario government has proposed aggressive climate change policies. The province released a climate change action plan in June 2007, pledging a 6% reduction in emissions by 2014, 15% by 2020 and 80% by 2050. To achieve these objectives, the province directed provincially-owned Ontario Power Generation to phase out coal-fired power generation (originally in 2009, then 2011 and now promised by 2014), the legislature has passed a cap-and-trade legislation and the government has announced a C$ 11.5 billion Move Ontario 2020 plan to improve transit in the Greater Toronto and Hamilton areas.[18] The Ontario government canceled the installation of emissions scrubbers to reduce the releases of sulphur and nitrogen oxides, mercury and particulates in 2005 since the power plants were to be shut down in 2009 (now potentially in 2014).

The latest data confirm a strong trend towards declining emissions in the industrial and residential sectors, which decreased by 23.6% and 27.9% respectively and a sharp rise in transportation (+29.5%) and in the tertiary sector (+53.2%). Emissions in the electricity sector have also spiked in 2007, due to the operation of the TransCanada Energy combined cycle gas turbine in Becancour. The generating station, Quebec's largest source of greenhouse gas emissions that year, released 1,687,314 tonnes of CO2 equivalent in 2007[20] or 72.1% of all emissions from the sector and 2% of total emissions. The plant was closed in 2008[21] in 2009[22] and in 2010.[23]

In May 2009, Quebec became the first juridsiction in the Americas to impose an emissions cap after the Quebec National Assembly passed a bill capping emissions from certain sectors. The move was coordinated with a similar policy in the neighboring province of Ontario and reflects the commitment of both provinces as members of the Western Climate Initiative.[25]

On November 23, 2009, the Quebec government pledged to reduce its greenhouse gas emissions by 20% below the 1990 base year level by 2020, a goal similar to that adopted by the European Union. The government intends to achieve its target by promoting public transit, electric vehicles and intermodal freight transport. The plan also calls for the increased use of wood as a building material, energy recovery from biomass, and a land use planning reform.[26] According to simulations conducted with Quebec's Ministry of Finance econometric model, the reduction goal should impact the province's real GDP by 0.16% in 2020.[27]