ClimateWell, or CW, is a multinational cleantech company headquartered in Stockholm, Sweden. The company and its business partners install energy efficient solar energy solutions that provide cooling and heating, plus heat tap water in commercial buildings, hospitals, factories, hotels, offices, multi family homes and single family homes around the world. Solutions are installed both in new construction projects and retrofitted to existing buildings.

ClimateWell owns the trademark to the industry term Solar Cooling.[3]

Per Olofsson, the CEO, was conferred the grade of Commander of the Order of Civil Merit by His Majesty King Juan Carlos I of Spain in 2009.[4] He was also nominated in 2007 for the "European of the Year" and "Business Leader of the Year" award by The Economist, in its European Voice publication[5] along with Richard Branson, Arnold Schwarzenegger and Nicolas Sarkozy, president of France.

ClimateWell has won the following awards for its breakthrough technology:

ClimateWell has been recognized in the following lists and publications: 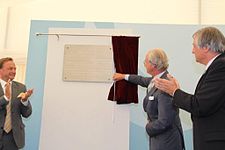 ClimateWell was formed in 2001 from the acquisition of SunCool by Göran Bolin's solar collector manufacturer Solsam Sunergy. Bolin became interested in the salt-based triple state absorption process[20] that transformed heat into cooling without using electricity. He envisioned "solar cooling" by commercializing the technology in places with plenty of solar irradiation.

The company's first "Solar Cooling" units were sold and installed as early as 2003.

Orders and installations were also sent to high-temperature places in Italy, Dubai and Australia.[22] By early 2009, ClimateWell had offices in Stockholm, Madrid, Olvega and Åland.[23]

"Solar cooling" is the process of turning the solar irradiation, via hot water, into cooling without using electricity. Solar Cooling means using a solar thermal collector (i.e. not photovoltaics). The months of the year which require the most cooling also offer the most sunlight. Environmentally friendly cooling systems provide cooling without escalating the CO2 emission problem.