All Pro Freight Stadium is a baseball park in Avon, Ohio. It is the home of the Lake Erie Crushers, a Frontier League team that began play in 2009. The ballpark has a capacity of 5,000 people and opened on June 2, 2009, with the Crushers defeating the Windy City Thunderbolts, 5-2. The naming rights to the ballpark are owned by an Avon-based transportation, warehouse, and distribution company called All Pro Freight Systems Inc.[1]

All Pro Freight Stadium, the home of the 2009 Frontier League Champions, the Lake Erie Crushers, has been nominated as Best Stadium by Cleveland Metromix.com. Other nominees include Canal Park, the home of the Akron Aeros, Cleveland Browns Stadium and Progressive Field.[2] 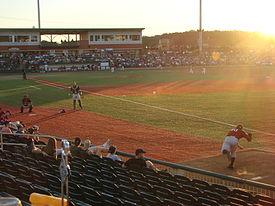 The Cleveland State Vikings baseball team also plays their home games at All Pro Freight Stadium. The announcement is a two-year deal with a mutual option to extend the agreement and was made on Friday (10/9/09).[3][4]