Clearwater Paper Corporation is a pulp and paper product manufacturer that was created on December 9, 2008 via a spin-off from the real estate investment trust (REIT) company Potlatch Corporation. With its headquarters in Spokane, Washington, the new company had six facilities for the manufacture of bleached paperboard, consumer tissue and wood products[1].

In late 2010, the company acquired Cellu Tissue Holdings, Inc., headquarted in Alpharetta, Georgia, which greatly increased its tissue manufacturing presence in the eastern United States and Canada. The total number of manufacturing sites rose to fourteen, with another in construction.[2]

Clearwater Paper is the premier supplier of privately labeled tissue products to the major retail grocery chains[3]. It supplies more than half of the store brand bathroom tissue, paper towels, facial tissue and napkins to grocery stores in the United States[1].

The company's spin-off from Potlatch Corporation was announced by its board of directors on July 17, 2008, [4] with the official date for the creation of Clearwater Paper being December 9, 2008. Before the spin-off, Clearwater Paper had been a subsidiary of Potlatch since 2005, before which it had been directly owned by Potlatch.

According to the IRS, the spin-off was ruled to be a tax-free distribution of stocks as Potlatch issued 1 share of Clearwater Paper stock for every 3.5 shares of Potlatch stock, with any fractional shares being paid in cash[5]. The Clearwater stocks began trading on December 17.

Gordon L. Jones, who had been a vice president of Potlatch since July 2008, was chosen as the president and chief executive officer of Clearwater Paper.

After the spin-off, Clearwater was left with an outstanding debt of $150 million. It had inherited $100 million of debentures that had been issued by an affiliate company of Potlatch, and the other $50 million it had drawn out on credit[5].

In the second quarter of 2009, Clearwater received a total of $76.4 million worth of refundable tax credits under the Internal Revenue Service Code Section 45, for its alternative fuel mixture[6]. Clearwater's plants derive some of their energy from the use of a fuel mixture that includes black liquor, a byproduct of its pulp-manufacturing process. The company receives $0.50 for every gallon of alternative fuel mixture it uses[5]. 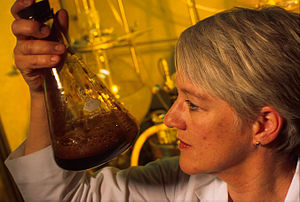 Thus Clearwater is registered with the IRS as an alternate fuel mixer.

Clearwater Paper also markets a number of FSC products[5], including the brand Ancora, a high-end, coated, double-side bleached white paperboard. Of the only three similar products manufactured in a full variety of sizes is the United States, it is the only one that has on-label Forest Stewardship Council (FSC) certification. Another of the company's brands is Candesce, which is sold for use in premium lines of C1S folding carton as well as paperboard for commercial printing, carded packaging and liquid packaging board. Candesce is the only brand of SBS (solid bleached sulfate) with FSC certification across its full range of calipers[5].

Two of Clearwater's mills, those in Arkansas and Idaho, are also FSC-Chain of Custody certified and ISO 9001:2001 certified.

The consumer products segment manufactures and sells household tissues, including paper towels, napkins, bathroom tissue and facial tissue. It produces over half of the store-brand, household tissues sold in grocery stores in the United States[5]. It also markets the brands Ancora and Candesce.

The consumer products division produces through-air-dried (TAD) paper towels, as well as premium and value brand towels. It makes napkins in ultra, two-ply and three-ply dinner napkins, plus value one-ply luncheon napkins. The bathroom tissue produced is mostly two-ply ultra, though other types are manufactured and sold. The facial tissues produced by the division include ultra lotion facial tissues. Clearwater primarily produces ultra and premium qualities of the tissue it produces, though it does manufacture lower grades as well.

The division uses three machines at the company's facilities in Lewiston, Idaho, and one machine at the Las Vegas facility in Nevada[6].

The company's pulp and paperboard segment manufactures bleached paperboard, primarily for the packaging industry, as well as solid bleach sulfate (SBS) paperboard. SBS board is a type of paperboard that is used in the production of folding cartons, liquid packaging, plates, cups and some commercial printing applications.

The pulp and paperboard segment also produces softwood market pulp, which is used as the primary raw material in the production of a wide variety of paper products, and slush pulp (excess or waste pulp), which it sends to the consumer products segment. To make pulp for the manufacture of all its products, the division uses several species of pine and fir trees, as well as high-quality cedar products[5].

The pulp and paperboard division operates one facility in Idaho and one in Arkansas[6].

Prior to the acquisition of Cellu Tissue in 2010, Clearwater operated six facilities in the United States, which were previously owned by Potlatch until the spin-off.

The consumer products segment operates three conventional tissue machines at the site, which all run 24 hours a day, 7 days a week.

The pulp and paperboard segment established a mill at the site in 1950, which underwent rebuilds throughout the 1980s and 1990s. The excess and waste pulp from the mill is either sent to the consumer products machines for use as slush pulp, or it is turned into baled pulp and sold.

The wood products segment built the original facility, and was operating a mill there since the site opened in 1927[6].

The site in Las Vegas, Nevada, was built by the consumer products segment, and was intended to allow servicing of the south-western United States. It was completed in 1994. The facility originally had 100,000 square feet (9,300 m2) of warehouse storage space for finished goods, and now has two more warehouses with 500,000 square feet (46,000 m2) of space for the storage of finished goods, raw materials and parent rolls. One of these warehouses is leased by Clearwater, and provides the facility will rail access. This facility also operates 24/7.

In 2004, a machine for the manufacture of through-air-dried (TAD) paper towels began operation at the site[6].

The pulp and paperboard segment built a mill in Arkansas in 1977[7], making it the newest SBS mill in North America[6].

The Illinois facility is leased (though all the machines at the facility are owned by Clearwater), making it the only one of those operated by Clearwater that is not owned. It also operates 24/7, and it services mostly the Midwest and Eastern United States. It is located in Elwood, Illinois.

The facility is operated by the consumer products segment and has 400,000 square feet (37,000 m2) of warehouse storage for finished goods, raw materials and parent rolls[6].

Two distribution centers are operated by the consumer products division, one in Fort Worth, Texas, the other in Tracy, California.