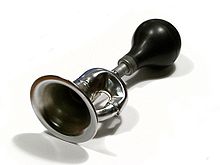 A vehicle horn is a sound-making device used to warn others of the approach of the vehicle or of its presence. Automobiles, trucks, ships, and trains are all required by law to have horns. Bicycles are also legally required to have an audible warning device in many jurisdictions, but not universally, and not always a horn.

Classic bicycle horns usually consist of a single horn operating at a single resonance frequency, with a reed made of steel located in the throat of the horn, and supplied with air by a rubber squeeze bulb. Other variations include battery operated horns, and small air horns powered by a small can of compressed gas.

Oliver Lucas of Birmingham, England developed a standard electric car horn in 1910. Automobile horns are usually electric, driven by a flat circular steel diaphragm that has an electromagnet acting upon it and is attached to a contactor that repeatedly interrupts the current to the electromagnet. This arrangement works like a buzzer or electric bell and is commonly known as "sounding" or "honking" one's horn. There is usually a screw to adjust the distance/tension of the electrical contacts for best operation. A spiral exponential horn shape (sometimes called the "snail") is cast into the body of the horn, to better match the acoustical impedance of the diaphragm with open air, and thus more effectively transfer the sound energy. Sound levels are approximately 107-109 decibels, and current draw 5-6 amperes.

Horns can be used singly, but are often arranged in pairs to produce a chord consisting of two notes, sounded together; although this only increases the sound output by 3 decibels, the use of two differing frequencies with their beat frequencies and missing fundamental is more perceptible than the use of two horns of identical frequency, particularly in an environment with a high ambient noise level. Typical frequencies of a pair of horns of this design are 500 and 405–420 Hz (approximately B4 and G#4).

Some cars, and many motor scooters or motorcycles, now use a cheaper and smaller alternative design, which, despite retaining the name "horn", abandons the actual horn ducting and instead relies on a larger flat diaphragm to reach the required sound level. Sound levels are approximately 109-112 decibels, and current draw 2.5-5 amperes. Again, these horns can be either single, or arranged in pairs; typical frequencies for a pair are 420-440 and 340–370 Hz (approximately G#4-A4 and F4-F#4) for this design.

A horn grille is a part of some designs of automobile or other motor vehicle that has an electric horn, such as a motor scooter.

The radiators of modern cars no longer determine the shape of the grilles, which have become more abstract, the radiator being of different proportions from the grille and over 15 centimetres behind it. Usually grilles are now designed such that the sound of a horn can readily come out through them. But those designs which maintain the notion that the shape of the grille shall reflect the shape of the radiator behind it no longer have front fenders with rather large crevices which would permit the old trumpet-shaped horns to be mounted on top of them. Thus some cars, often British ones, have a pair of round horn grilles mounted on either side of the radiator grille, behind each of which a horn is located. A luxury car's horn grilles are usually chrome-plated.

Cars with rear engines, such as the Volkswagen Beetle and the early Porsches, necessarily have no radiator grilles in front, and so have horn grilles placed below their headlights.

Some motor scooters have this feature as well, placed below the handlebars. Their horn grilles may be cheap plastic. These vehicles and the cheaper cars have only one horn.

Truck (lorry) horns may be electromagnetic klaxons of design similar to those of automobiles. Often they are not electrically driven, but are purely acoustic, driven by air from an air compressor which diesel trucks already have on board to operate the air brakes. Such air horns are often used as trim items, with chromed straight horns mounted on top of the cab. This design may also be installed on customized automobiles, using a small electrical compressor. Usually two are used, sometimes more. The frequencies vary in order to produce a variety of different chords, but in general are lower than those of automobile horns; for instance 125 through 180 Hz (approximately B2-F#3). Sound levels are approximately 117-118 decibels.

Train horns can be grouped from one to five horns, to form a chord that has the notes sounded together; these are operated by compressed air from the air system.

Ships signal to each other and to the shore with horns (sometimes referred to as whistles) that are driven with compressed air or from steam tapped from the power plant. Low frequencies are used because they travel further than high frequencies; ships horns have been heard as far as ten miles away.[1] Traditionally, the lower the frequency, the larger the ship. The RMS Queen Mary, an ocean liner launched in 1934, had three horns based on 55 Hz, a frequency chosen because it was low enough that the very loud sound of it would not be painful to the passengers.[2] Modern International Maritime Organization regulations specify ships' horn frequencies to be in the range 70–200 Hz for vessels that are over 200 meters in length.[3]

Portable aerosol-driven air horns are used for small craft water safety as well as for sports events and recreational activities.

Foghorns use low frequency tones to warn ships away from unseen coastlines. The large horn mouth is aimed out to sea.

Many localities have rotating or stationary horns mounted on buildings or poles to warn residents of emergency conditions such as severe storms. They are also used as civil defense sirens and emergency service sirens which often employ one or more acoustic horns to focus or distribute the sound.

Switches to sound Klaxon on a Submarine

Klaxon is a trademark for a brand of electromechanical horn or alerting device. Mainly used on automobiles, trains and ships, klaxon horns produce an easily-identifiable sound often transcribed onomatopoeiacally as "awooga" or "ah-oo-gah". Like most mechanical horns, the klaxon has largely been replaced by solid-state electronic alarms, though the memorable tone itself has persisted.

The klaxon horn's characteristic sound is produced by a spring-steel diaphragm with a rivet in the center that is repeatedly struck by the teeth of a rotating cogwheel. The diaphragm is attached to a horn that acts as an acoustic transformer and controls the direction of the sound.

In the first klaxons, the wheel was driven either by hand or an electric motor. American inventor Miller Reese Hutchison (later chief engineer of Thomas Edison) patented the mechanism in 1908.[4] The Lovell-McConnell Manufacturing Co. of Newark, New Jersey bought the rights to the device and it later became standard equipment on General Motors cars.[5] Franklyn Hallett Lovell Jr., the founder, coined the name klaxon from the Ancient Greek verb klazō, "to shriek".[6]

Klaxons were first fitted to automobiles and bicycles in 1908. Electric klaxons were the first electrical devices to be fitted to private automobiles. They were originally powered by 6-volt dry cells, and from 1911 by rechargeable batteries. Later hand-powered versions were used as military evacuation alarms and factory sirens. The klaxon is also remembered for its use as a submarine dive alarm in World War II.

The Klaxophone is an instrument that makes use of the klaxon's unique sound.

The English company Klaxon Signals Ltd. has been based in Oldham, Greater Manchester, England for the last 80 years, with premises also in Birmingham. The French Klaxon company was acquired by the Italian Fiamm Group in the 1990s. In 2005 Klaxon Signals sold the rights for the hooter or klaxon range to Moflash Signalling Ltd., based in the original Klaxon Factory in Birmingham England. The Famous Klaxet ES and A1 hooters returned home to Birmingham after 10 years.[citation needed]