Dringhouses is a suburb, formerly a village, in York, England and includes the area known as Woodthorpe. It is bounded by the Knavesmire, an open area of land on which York Racecourse is situated, to the east, Askham Bogs and the A64 to the south, the York Outer Ring road to the west and the Unitary Authority Wards of Westfield, Acomb, and Holgate to the north. It is located approximately two and quarter miles from York City Centre.

The name derives from "Drengeshirses" (1109) and means "the houses of the drengs", a "dreng" being a man who held land by a particular kind of free tenure.[1]

It is a mixture of housing estates and large open spaces, with the East Coast main railway line running through the middle. The population of Dringhouses and Woodthorpe is 10,733. 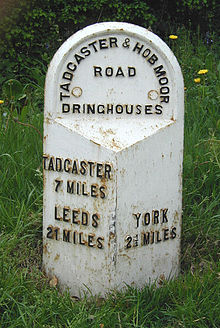 The Old Norse name from which Dringhouses is derived, indicates the villagers were the descendants of Halfdan, the Viking leader who had taken the area from the Angles and had shared the land among his warriors in 876.[citation needed] The free land of the Drengs became a Norman manor - ultimately owned by Archbishop Walter de Gray who granted it to his brother Robert in 1244 and thence to John, Lord Grey of Rotherfield. The title passed to Sir John Deincourt and his ancestors until it was inherited by the Wilkinson family. The last Lord of the manor, Col. Wilkinson, died on 13 January 1941. The subsequent break-up of the estate meant that most of the land in the village was no longer owned by one family.[2]

There was a long dispute over the Wapentake of the Ainsty - which included Dringhouses - from the early Middle Ages. In 1276 the Courts of Edward I dealt with a claim by the York Corporation that:-"... the citizens of York hold the wapentake of Ainsty and the city of York of the King...". The claim was based on a Charter of the reign of King John and the case was lost on the grounds that the extent of the land was not specified and, more seriously, that the Charter contained erasures. For this the Mayor was held responsible and was imprisoned for a short time.[citation needed] The claim was revived in 1448 and upheld. From that date until 1832 the people of the Ainsty and therefore Dringhouses were under the authority of York Corporation.[citation needed]

Though Dringhouses was within the parish of Holy Trinity Priory, Micklegate, it formed a separate manor and thus lay outside of the City of York.[3] In St Helen's Road, between 1920 and 1946, the house next to the Cross Keys car park was the Club House for the 15-hole golf course on the Hob Moor, which later moved, as the York Golf Club, to Strensall, with the railway workers who used to play there moving to Pike Hills Golf Club.[4]

The present shops on Tadcaster Road were originally a row of cottages known as Meek's Buildings, nicknamed "Washing Tub Row" because those who lived there took in washing for the gentry.[citation needed]

Dringhouses village was incorporated into the City in 1937. The present Marriott Hotel (formerly the Chase Hotel) stands at the boundary of the village with the city and was the terminus for the trams in their heyday. The electric trams replaced the horse bus in 1911.[5]

Dringhouses is currently the site of a National Trust office, in the former home of the Terry family, famed chocolate makers.Terry's chocolate factory, in the nearby Ward of South Bank, was closed in 2005 and its production has shifted to factories in mainland Europe.[6]

Hob Moor, which forms part of the Knavesmire and hence Micklegate Stray, is first mentioned in documents in 1374 as '"Yhorkesmore""' and first noted as '"Hobbe Moore"' in 1624 by the cartographer, Samuel Parsons. During the early 17th century, accommodation was constructed to house plague victims on Hob Lane, leading to the Moor. This is indicated by the Plague Stone still visible today. Next to this stone is the '"Hob Stone"' which depicts the shield and effigy of a knight of the de Ros family, who is reputed to have given his name to the area. In 1745, the York to Tadcaster Turnpike was constructed, which follows the route of the modern Tadcaster Road in the area. The Moor has been used as an area for the Military. In 1644, the Scottish troops, who were part of the Parliamentarian Army, were encamped here during the siege of York. From 1912 to 1920, the Moor was used for training Cavalry troops.[7]

Dringhouses is part of the Dringhouses and Woodthorpe Ward in the Unitary Authority of York. As of 2010 it is represented by the Liberal Democrats Coucillors Tom Holvey, Ann Reid and Susan Sunderland.[8]

The figures below were taken from the Census 2001 Key Statistics for Local Authorities in England and Wales, from the Office of National Statistics on 29 April 2001.[9] The next census is due in 2011. 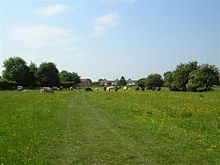 Dringhouses is located two and a half miles from York City Centre. The East Coast Main Line runs through the centre of the area. There are some open areas of land including Marsh farm, Chaloners Whin and Sim Hills. Council run allotments can be found at the entrance to Hob Moor on Tadcaster Road.[11] There are areas of open water near Aintree Court, Bramble Dene and at Chapmans Pond and Hogg's Pond on Moor Lane. There are several small becks or streams in the area, namely on Hob Moor and on Chaloners Whin.

The largest open area is Hob Moor which is part of the Knavesmire, that together make up Micklegate Stray. This land was once used for growing crops as demonstrated by the ridges and furrows still evident. As of 2010, it is still used as grazing land, licensed by York City Council.[12][13] Hob Moor was designated as a Local Nature Reserve in 2003 and hosts a variety of flora and fauna. Amongst the birds that can be found here are Meadow Pipit, Skylark, Whinchat, Wheatear, Yellow Wagtail and Merlin.[14]

Play areas can be found at Nelsons Lane, Heron Avenue (owned by the Joseph Rowntree Foundation), Woodthorpe Green and Leeside.[15]

The York to Tadcaster turnpike ran through this area following the route of the modern Tadcaster Road, which formed part of the old A64 to Leeds. 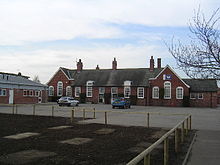 Primary education is catered for at Dringhouses Primary School on St Helens Road. The original school was founded in 1849 - adjacent to the church. In 1852 a new school was built and is now the local library. It then moved into the old school house on its present site next to the railway in 1904.[17] There is also Woodthorpe Primary School in Summerfield Road. York College has its campus at the former Tollcross[18] at the southwestern edge of the village and caters for Sixth Form and Further Education in York. The college was built on the area previously occupied by Ashfield Secondary School, the nearby old York College of Arts & Technology being demolished for a new housing estate.

Dringhouses, The Church of St. Edward the Confessor

There is a 19th century church, St Edward the Confessor, on Tadcaster Road opposite the junction with St Helens' Road. The first chapel, dedicated to St Helen, was built in 1472 and replaced in 1725.[19] It was on the site of the present Holiday Inn and was dedicated to St.Helen - hence the road opposite down the side of the Cross Keys pub and leading to the School and the bridge over the railway is called St.Helen's Road.[citation needed] The present church (dedicated to St.Edward the Confessor) was built alongside in 1849. The latter was designed by Vickers and Hugall of Pontefract and the spire was replaced with a fibreglass replica in the late 1960s due to problems with the original stone structure. The church contains some fine Mousie Thompson carvings.[citation needed]There is a Methodist Chapel in West Thorpe, which opened on 17 July 1954, after the original 1816 Chapel in Slingsby Road was closed.[20]

Dringhouses was home in the 1960s, 70s and 80s to Harland Miller, an artist from the Jay Jopling and Sam Taylor Wood camp, and author of the "rite-of-passage" novel "Slow Down Arthur Stick to 30".[24]