Statement of the classification 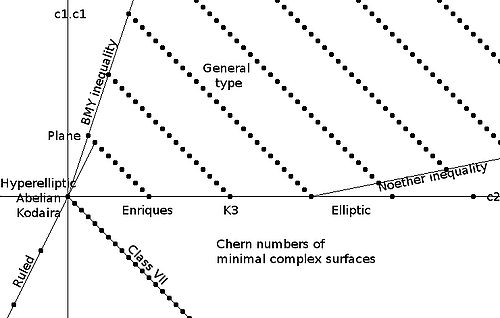 For the 9 classes of surfaces other than general type, there is a fairly complete description of what all the surfaces look like (which for class VII depends on the global spherical shell conjecture, still unproved in 2009). For surfaces of general type not much is known about their explicit classification, though many examples have been found.

Oscar Zariski constructed some surfaces in positive characteristic that are unirational but not rational, derived from inseparable extensions (Zariski surfaces). Serre showed that h0(Ω) may differ from h1(O). Igusa showed that even when they are equal, they may be greater than the irregularity defined as the dimension of the Picard variety.

The most important invariants of a compact complex surfaces used in the classification can be given in terms of the dimensions of various cohomology groups of coherent sheaves. The basic ones are the plurigenera and the Hodge numbers defined as follows:

By Serre duality hi,j = h2−i,2−j, and h0,0 = h2,2 = 1. If the surface is Kähler then hi,j = hj,i, so there are only 3 independent Hodge numbers. For compact complex surfaces h1,0 is either h0,1 or h0,1 − 1. The first plurigenus P1 is equal to the Hodge numbers h2,0 = h0,2, and is sometimes called the geometric genus. The Hodge numbers of a complex surface depend only on the orientated real cohomology ring of the surface, and are invariant under birational transformations except for h1,1 which increases by 1 under blowing up a single point.

There are many invariants that (at least for complex surfaces) can be written as linear combinations of the Hodge numbers, as follows:

For complex surfaces the invariants above defined in terms of Hodge numbers depend only on the underlying oriented topological manifold.

Minimal models and blowing up

For non-algebraic surfaces Kodaira found an extra class of surfaces, called type VII, which are still not well understood.

Rational surface means surface birational to the complex projective plane P2. These are all algebraic. The minimal rational surfaces are P2 itself and the Hirzebruch surfaces Σn for n = 0 or n ≥ 2;. (The Hirzebruch surface Σn is the P1 bundle over P1 associated to the sheaf O(0)+O(n). The surface Σ0 is isomorphic to P1×P1, and Σ1 is isomorphic to P2 blown up at a point so is not minimal.)

Invariants: The plurigenera are all 0 and the fundamental group is trivial.

Invariants: The plurigenera are all 0.

Examples: The product of any curve of genus > 0 with P1.

These surfaces are never algebraic or Kähler. The minimal ones with b2=0 have been classified by Bogomolov, and are either Hopf surfaces or Inoue surfaces. Examples with positive second Betti number include Inoue-Hirzebruch surfaces, Enoki surfaces, and more generally Kato surfaces. The global spherical shell conjecture implies that all minimal class VII surfaces with positive second Betti number are Kato surfaces, which would more or less complete the classification of the type VII surfaces.

Most solutions to these conditions correspond to classes of surfaces, as in the following table:

These are the minimal compact complex surfaces of Kodaira dimension 0 with q = 0 and trivial canonical line bundle. They are all Kähler manifolds. All K3 surfaces are diffeomorphic, and their diffeomorphism class is an important example of a smooth spin simply connected 4-manifold.

Invariants: The second cohomology group H2(X, Z) is isomorphic to the unique even unimodular lattice II3,19 of dimension 22 and signature −16.

Invariants: The plurigenera are all 1. The surface is diffeomorphic to S1×S1×S1×S1 so the fundamental group is Z4.

Examples: A product of two elliptic curves. The Jacobian of a genus 2 curve. Any quotient of C4 by a lattice.

Invariants: If the surface is the quotient of a primary Kodaira surface by a group of order k=1,2,3,4,6, then the plurigenera Pn are 1 if n is divisible by k and 0 otherwise.

Examples: Take a non-trivial line bundle over an elliptic curve, remove the zero section, then quotient out the fibers by Z acting as multiplication by powers of some complex number z. This gives a primary Kodaira surface.

These are the complex surfaces such that q = 0 and the canonical line bundle is non-trivial, but has trivial square. Enriques surfaces are all algebraic (and therefore Kähler). They are quotients of K3 surfaces by a group of order 2 and their theory is similar to that of algebraic K3 surfaces.

Invariants: The plurigenera Pn are 1 if n is even and 0 if n is odd. The fundamental group has order 2. The second cohomology group H2(X, Z) is isomorphic to the sum of the unique even unimodular lattice II1,9 of dimension 10 and signature -8 and a group of order 2.

Marked Enriques surfaces form a connected 10-dimensional family, which has been described explicitly.

Over the complex numbers these are quotients of a product of two elliptic curves by a finite group of automorphisms. The finite group can be Z/2Z, Z/2Z+Z/2Z, Z/3Z, Z/3Z+Z/3Z, Z/4Z, Z/4Z+Z/2Z, or Z/6Z, giving 7 families of such surfaces. Over fields of characteristics 2 or 3 there are some extra families given by taking quotients by a non-etale group scheme; see the article on hyperelliptic surfaces for details.

An elliptic surface is a surface equipped with an elliptic fibration (a surjective holomorphic map to a curve B such that all but finitely many fibers are smooth irreducible curves of genus 1). The generic fiber in such a fibration is a genus 1 curve over the function field of B. Conversely, given a genus 1 curve over the function field of a curve, its relative minimal model is an elliptic surface. Kodaira and others have given a fairly complete description of all elliptic surfaces. In particular, Kodaira gave a complete list of the possible singular fibers. The theory of elliptic surfaces is analogous to the theory of proper regular models of elliptic curves over discrete valuation rings (e.g., the ring of p-adic integers) and Dedekind domains (e.g., the ring of integers of a number field).

In finite characteristic 2 and 3 one can also get quasi-elliptic surfaces, whose fibers may almost all be rational curves with a single node, which are "degenerate elliptic curves".

These are all algebraic, and in some sense most surfaces are in this class. Gieseker showed that there is a coarse moduli scheme for surfaces of general type; this means that for any fixed values of the Chern numbers c12 and c2, there is a quasi-projective scheme classifying the surfaces of general type with those Chern numbers. However it is a very difficult problem to describe these schemes explicitly, and there are very few pairs of Chern numbers for which this has been done (except when the scheme is empty!)

Invariants: There are several conditions that the Chern numbers of a minimal complex surface of general type must satisfy:

Most pairs of integers satisfying these conditions are the Chern numbers for some complex surface of general type.

Examples: The simplest examples are the product of two curves of genus at least 2, and a hypersurface of degree at least 5 in P3. There are a large number of other constructions known. However there is no known construction that can produce "typical" surfaces of general type for large Chern numbers; in fact it is not even known if there is any reasonable concept of a "typical" surface of general type. There are many other examples that have been found, including most Hilbert modular surfaces, fake projective planes, Barlow surfaces, and so on.