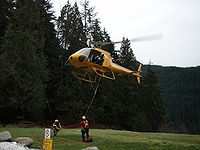 A rescue in progress.

The Helicopter Flight Rescue System (HFRS), also known as Human External Transport (HETs), is a helicopter insertion and extraction tool which as under the Canadian Aviation Regulations (CARs) is authorized for use in Forest Fire Fighting, Law Enforcement and Search and Rescue. Under CARs, HFRS falls under Class D operations, which is that it involves a jettisonable human external load suspended beneath the landing gear of the helicopter. By regulation, air carriers, operations personnel, and essential aircrew are required to be extensively trained. There must also be a memorandum of understanding between the tasking agency and the air operator in order to ensure a good working relationship.[1] In British Columbia, the Provincial Emergency Program allows volunteer search and rescue societies to perform HFRS to conduct various rescue missions.[2] Given the benefits of extending a rescuer below the aircraft, thus allowing the aircraft to remain clear of obstacles while a rescue/insertion/extraction is performed, it is evident that this is an essential life saving tool. This system is commonly referred to as longline rescue and involves a rescuer being attached to the bottom of a longline and being slung to a rescue site. This allows the pilot to insert the rescuer into most types of terrain (angle, obstacles, and hazards permitting).[3]

One of the pioneer search and rescue teams in Canada of the Helicopter Flight Rescue System was and continues to be, North Shore Rescue. This organization recognizing a need to move beyond reliance on conventional hover entry-exit techniques (still widely used)[4] implemented the system to the team in 1996. Since then, it has been a life saving tool, in many of their rescues.[5] With benefits come costs, and much of those costs include the heavy price of training given that search and rescue members are volunteers. North Shore Rescue trains heavily to stay up to speed.[6] With HFRS' growing popularity in BC, and its relative simplicity, many more teams have received kits and have begun using it. Teams in the Lower Mainland or Metro Vancouver who utilize this tool include North Shore Rescue, Chilliwack, Squamish and Whistler.[7]

The HFRS system has multiple components which ultimately safely suspend a rescuer under the helicopter (extended below the skids) with two distinct actions required to release the load, and load bearing redundancy. The components include:

Pictures of these components can be viewed in the gallery below. Ultimately, this system is a versatile and safe way of executing complicated rescues in often dangerous and unforgiving terrain.[8]