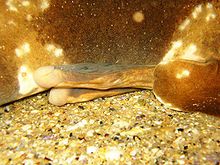 The claspers of a spotted wobbegong shark (Orectolobus maculatus)

In biology, a clasper is a male anatomical structure found some groups of animals, used in mating.

Male cartilaginous fish have claspers formed from the posterior portion of their pelvic fin which serve as intromittent organs used to channel semen into the female's cloaca during mating. The act of mating in some fish including sharks usually includes one of the claspers raised to allow water into the siphon through a specific orifice. The clasper is then inserted into the vagina, where it opens like an umbrella to anchor its position. The siphon then begins to contract exerting water and sperm. Male chimaeras have cephalic claspers on their heads, which are thought to aid in holding the female during mating.

In entomology, it is a structure in male insects that is used to hold the female during copulation.