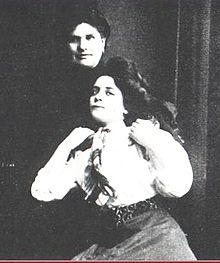 Clara Young and her mother 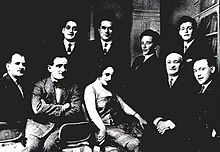 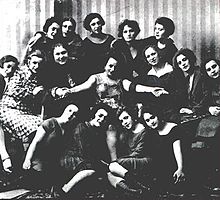 Clara Young and members of her theater troup in Russia

Clara Young (born Khaya-Risye Shpikolitser c. 1882 in Zlotshev, Galitsia) was a Yiddish theatrical actor. Born to parents who loved the stage she spent her early years in a home that housed rehearsals of traveling Yiddish theater troups. After her father's death the family went to America, where she soon joined the Tantsman company and went to Boston, there to Zolotarevski's troup in Montreal, thence to Toronto and to Morris Finkel's theater in Philadelphia.[1]

In 1903 she played in the People's Music Hall where she made a name with songs like Di dame fun Broadvey and Libe mayne. In 1909 she went over to the Thalia Theater where her husband Boaz Young was part owner, and there played serious roles for the first time, Tsipeniu and Got, mentsh un tayvl (God, man and devil) and Kreutzer Sonata and in Dos yidishe harts singing the couplet Sigmund Mogulesko wrote for her, Ikh hob es punkt vi in der heym. She played in Di bigamistin (zayn vayb's man) which, along with Avrom Shomer's Alrightnikes, she and her husband took to London in 1911 and then to the Lodz Groys teater and Warsaw's Elyseum Theater. Her success encouraged the couple to return to Warsaw, where in 1912 she starred in Anshel Shor and Joseph Rumshinsky's Dos meydl fun der vest (Di Amerikanerin) and later Khantshe in Amerike and Alma, vu voynstu? (Alma, where do you live?) and the German operetta Puptshik.[1]

"She was the most beloved Yiddish actress in Poland and Russia during the 1910s... Not only the Yiddish-speaking operetta audience adored her, so did Poles and Russians ... Even the Yiddish intellectuals and literati in Warsaw were smitten with Clara--no small feat for a soubrette performing American Yiddish operettas ... critics like Mukdoyni, Prilutski, Dovid Frishman, and Peretz appreciated her elegance, language, and nuanced acting, and they were also clearly attracted by her beauty. Her appeal lay in her feminine charm, mixed with a hint of eroticism... Although not all of her repertoire was set in America, she clearly capitalized on being an American and impersonating American characters on stage."[2]

"Masses of Poles came to see Di amerikanerin; Warsaw assimilators were not embarrassed to come to the Yiddish theater ... young Hasidim would sneak into the theater ... [and] Jewish literati saw in Clara Young's performances a revival of the Yiddish language. ... Rumshinsky's music to Di amerikanerin was so successful that not only Jews but also Poles sang it. It could be heard in all cabarets."[2]

Her popularity grew when she starred in her husband's Jeykele the bluffer In 1922 she starred in the premiere of Tomashevsky's Di grine kuzine. In 1923, at the Prospect Theater, she played the title role in Der yeshiva bokher (The schoolboy), soon after traveling in Poland and the Soviet Union for several years, then Argentina and Brazil in 1928, then back to Lodz, Warsaw, Riga and Vilna in the 1930s, then Paris, Berlin, and London, Belgium, Mexico and Cuba.

Subsequently Clara returned alone to the Soviet Union, became a Soviet citizen, and spent the rest of her life there.[2] Ida Kaminska, the Polish born actress wrote of meeting up with Young in 1941 when all were temporarily stuck in Tashkent.[3] Clara died in Moscow in 1952.[2]