Civilization: Call to Power (CivCTP) is a PC turn-based strategy game developed by Activision as a successor to the extremely successful Civilization computer game by Sid Meier. It was ported to Linux by Loki Software.

A sequel, Call to Power II, was released 18 months after the original. The sequel could not have "Civilization" in its title because Activision did not have a license for the "Civilization" name for a second game.[1]

One of the most noticeable differences from the original Civilization is that the timeline of the game does not end in the 21st century, but rather goes to the year 3000.

There are five epochs in this game: Ancient Age, Renaissance, Modern Age, Genetic Age, and Diamond Age. In the game, space colonization and sea colonization become a reality with appropriate technological advances (available in the Genetic Age).

Similar to Civilization II, the game uses an isometric view, although each tile is actually two separate tiles: the space level on top of a "terrestrial" level (thus, this game has a z-coordinate to represent position). Players can toggle between "Earth view" and "space view". All land and naval units are exclusively terrestrial, although most land units can be launched into space inside a cargo pod by a rail launcher in cities or via a space plane.

Space fighters and space planes can freely travel in space and in the atmosphere. While the SWARM warrior can survive in space as well as the earth, it cannot launch itself into space. There are also some units that exist in space exclusively (i.e. cannot make a re-entry into the atmosphere) such as the Star Cruiser, the Phantom and the Space Bomber.

Space produces no resources, as it is a vast void. However, once a space colony is built, players can build food pods and assembly bays to produce resources for the colony.

"Water tiles" are also divided into several types. After submarines are available, the type of tile in oceans can be seen (e.g. continental shelf, deep sea trench, rift, etc). Once the technology for sea colonies is discovered, undersea tunnels can be built to link to other sea colonies and dry land. Fisheries and undersea mines can also be built to produce resources. 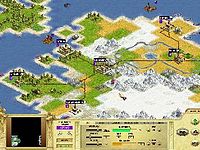 In Civilization: Call to Power, pollution is produced in meaningful quantities after the Industrial Revolution advance. Cities that produce a lot of pollution will start to produce "dead tiles" within their city radius. Such tiles produce no resources. If pollution is left unchecked, eventually the game will give a warning that global disasters will occur. Disasters include change in climate, ozone deterioration, and global warming. In the case of global warming, the game informs the player that "ice caps have melted" and sea levels have risen. Tiles affected are turned into either coast or shallow water, and cities on tiles that become shallow water or coast are destroyed.

The destruction of the ozone layer causes a large number of land tiles to become dead tiles. If a nation is appropriately technologically advanced, then that nation can repair dead tiles, albeit at a significant cost of industrial production. The "Gaia Controller" wonder removes all pollution in the game but can be built only in the Diamond Age.

Pollution is exacerbated by several city facilities such as factories and oil refineries. On the flip side, some facilities such as recycling plants and nuclear reactors will reduce the production of pollution. Additionally, certain events such as space launches and use of nuclear weapons will result in one-time additions of pollution each time that they occur.

While playing the game, the happiness level of the citizens must be maintained. If a city is far away from the capital, is overcrowded, polluted, overworked, starved or underpaid, the happiness level will drop. Cities also experience unhappiness during wartime, especially if they have just been conquered by another empire. Many terrorist units can decrease the happiness of an enemy city. For example, if a city is "infected", it will lose both population and happiness. If the happiness' level goes under 75, then the city is in danger of rioting. If a city riots, it does not produce any work during that turn. If happiness in cities continues to decline, revolution becomes a possibility. If that happens, the city's inhabitants become "Barbarians", or change nationality to another country if another country has the Egalitarian Act Wonder. However, if the happiness of a city reaches very high levels, it "celebrates." Some buildings can increase happiness (e.g. temples, cathedrals, body transplants), and wonders can increase happiness (e.g. Immunity Chip, Ramayana).

These can be built by any civilization who has acquired the technology to do so. They typically take a longer time to build than ordinary buildings or units of that age, but have a greater effect. The wonders usually affect the civilization as a whole (with exceptions, such as Galileo's Telescope which effectively doubles scientific production in the city which it is built), and can only be built by one civilization. Wonders can go obsolete with technological advances. For example, if someone researches "Age of Reason", the Stonehenge wonder no longer has any benefits. After a wonder is built by the player, a cinematic is shown. Generally, wonders of the future have a greater effect than wonders of the past. If a city containing a wonder is taken by another player, then ownership of the wonder and its benefits go to the conqueror.

Apart from conquering all opponents, players can achieve victory by completing the Alien Life Project, which is triggered by the "wormhole sensor" wonder. After a wormhole probe is sent through the wormhole, an alien life lab and a series of upgrades must be built to achieve victory. You can also win by converting all enemy cities on the map. The final option is to get the highest score by the year 3,000.

A review by Niko Nirvi in the May 1999 issue of Pelit gave Call to Power a score of 85%, describing it as a successful but overly clinical variant of Civilization II with a number of new features bolted on. He was disappointed by the interface and by an overly conspicuous dodging of the old series' assets: Civilization features inventing the wheel, so in Call to Power stirrups are invented instead. He was impressed by some of the innovations, particularly trade routes, stacked combat, units from future time periods and special units from spies to televangelists that can be used without a formal declaration of war. His biggest complaints were a crucial lack of immersion and an underwhelming diplomacy system. Nirvi had enjoyed the impression of distinct character personalities in Sid Meier's Alpha Centauri, and noted that in Call to Power it makes no difference whether one's facing Spain or orange. Nirvi summarized by writing that Call to Power will be allowed to hang out at the same bar as Civs and Alpha Centauri, but will have to buy them drinks.