The Philadelphia Convention Hall and Civic Center, more commonly known as the Philadelphia Civic Center and the Philadelphia Convention Center, was a complex of five or more buildings developed out of a series of buildings dedicated to expanding trade which began with the National Export Exhibition in 1899. There were two important buildings on the site. The Commercial Museum, built in 1899, was one of the original exposition buildings. The Municipal Auditorium (Convention Hall), built in 1931, Philip H. Johnson, architect. The site was host to national political conventions in 1900, 1936, 1940 and 1948.

The Convention Hall arena was located at 3400 Civic Center Blvd, on the edge of the campus of the University of Pennsylvania, and just to the southwest of Franklin Field. It was built in 1930 and its highest capacity was approximately 12,000. The building was an Art Deco landmark, notable for its many friezes and other decorative aspects.

President Lyndon B. Johnson spoke at a campaign appearance on August 29, 1964 at Convention Hall. He appeared at the Hall alongside many notable Philadelphia and Pennsylvania Democratic leaders.[2] Four days later, The Beatles played the venue on September 2, 1964 during their first tour of the United States. Hy Lit booked the band for Philadelphia for $25,000. Tickets went on sale in May 1964 and sold-out within 90-minutes.[3] The Rolling Stones played Convention Hall on May 1, 1965 during their 3rd American Tour.[4]

After the building of The Spectrum in South Philadelphia in 1967, the building nearly became obsolete. The Grateful Dead played a two-night stand in August 1974 and a three-night stand in April 1984. On February 5, 1970, The Jackson 5 played their first official concert for Motown Records there. Phish also played once on December 28, 1994, as part of their 1994 NYE run. The building was later used for Atlantic Ten Conference and Big Five basketball games. The NWA and WCW also staged professional wrestling there, which included three pay-per-view events: Halloween Havoc in 1989 and 1992 and the 1994 Slamboree event. The Civic Center also hosted the World Hockey Association's Philadelphia Blazers and the minor-league Philadelphia Firebirds hockey teams. The University of Pennsylvania used the building for commencements (due to it being larger than Penn's own basketball arena, the nearby Palestra), as did Drexel University, Temple University, and La Salle University. West Philadelphia High School also used to use the building for its commencements. 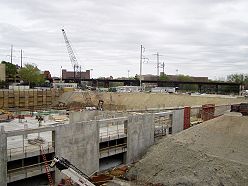 Convention Hall was torn down in 2005, after more than a decade without a regular tenant. The 1996 Atlantic 10 Men's basketball tournament was the last event ever held there (its convention functions were taken over by the Pennsylvania Convention Center in the city's central business district); prior to this, it also hosted college basketball in the form of the 1986 MEAC Men's Basketball Tournament. Afterwards, it served as a soundstage for movies and the TV series Hack starring David Morse. In addition, part of the 1990 movie Rocky V was shot there. In 1994 metal band Megadeth played a legendary show with Corrosion of Conformity.

The Auditorium's M.P. Moller 86-rank pipe organ, built in 1931, was removed just prior to the building's demolition and placed in Pennsylvania Hall in temporary storage. In October 2006 the organ was donated to the University of Oklahoma's, American Organ Institute [1] where it will be restored and become the centerpiece of their music programs.

The last remants of the Civic Center, Pennsylvania Hall, built in 1978, were imploded on March 5, 2007. Construction on the site has begun by the University of Pennsylvania Health System (UPHS) to create the Perelman Center for Advanced Medicine, which opened in October 2008.