Arts and culture in Brisbane

The culture of Brisbane derives from mainstream Australian culture and incorporates a strong history in the performing arts, music and sport.

In addition to the world class Queensland Gallery of Modern Art and Queensland Art Gallery, the universities based in Brisbane also contain art galleries. The University of Queensland has a purpose built gallery on its St. Lucia campus. The Queensland College of Art (a part of Griffith University), is based on the former Expo 88 site at South Bank, and the QUT Art Museum (a part of the Queensland University of Technology) is based at the QUT Gardens Point campus. 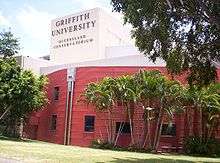 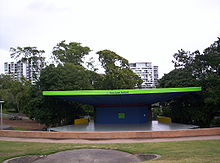 The Queensland Performing Arts Centre is also located at South Bank. It is also part of the Queensland Cultural Centre and contains Brisbane’s main theatres (Lyric Theatre, Concert Hall, Cremorne Theatre, and the Playhouse). The Australian Ballet and other touring companies visit Brisbane each year. Large scale visiting musicals make up the majority of offerings at the Lyric Theatre.

The Queensland Conservatorium and Queensland College of Art (both of which are part of Griffith University) were subsequently built within the South Bank Parklands, along with many other buildings, including the Suncorp Piazza.

Other theatres located in Brisbane include the Brisbane Arts Theatre, Twelfth Night Theatre, Roundhouse Theatre, Metro Arts Theatre and the Brisbane Powerhouse. There are also several theatres located at the universities, including the QUT Gardens Theatre & the QUT Creative Industries Precinct (both of which are at the Queensland University of Technology), and Cement Box Theatre & Schonell Theatre (both of which are at the University of Queensland). Newly constructed in an old community building in Spring Hill is the Centre Stage Theatre whose resident amateur company is about to go into its second season.

Brisbane has a long history of demolishing performing arts venues and theatres. Festival Hall, a music and entertainment venue was demolished in 2003. Before the Queensland Performing Arts Centre was built, major performing arts theatres included Her Majesty's Theatre in Queen Street, which was demolished. It was replaced by a modern building without a theatre. Artists such as Laurence Olivier, Vivien Leigh, Robert Helpmann and Dame Nellie Melba performed there. The Suncorp Theatre (originally called the SGIO Theatre), a purpose built drama theatre for the Queensland Theatre Company, was also demolished in 2007. The historic Regent Theatre in Queen Street is to be demolished this year. This will include the cinemas downstairs that have parts of the original theater and the original stage door. The Regent Theater will make way for a 38 story office block. The Regent will close its doors on the 15 June.

Brisbane also held World Expo 88 at South Bank, from April to October 1988, on land adjacent to the Queensland Performing Arts Centre. Many of the sculptures commissioned for the Expo remain around parts of the city, including at King George Square. The Expo site was converted into the South Bank Parklands following World Expo 88.

Brisbane has a range of public sculptures ranging from the large impressive statue of Queen Victoria in front of the Old Executive building to the more innovative City Roos sculptures made by sculptor Christopher Trotter, during 1999 from scrapmetal from a broad cross-section of industries. Each of the City Roos sculptures is unique. The City Roos sculptures take a look at the creative and classic Australian culture of 'making do', and symbolizes the importance of sharing space and communication.

The City Roos, which have proven to be a popular tourist attraction, are in not far from the Law Courts Complex, in George Street, Brisbane. Also close by are the Brisbane City Hall and King George Square with its impressive sculpture of King George V and a special sculptural grouping paying tribute to Queensland's early pioneers. Kangaroos, on which the city roos sculptures are based, are among Australia's best known wildlife icons.

The Brisbane City council has an online database of public artworks which can be searched for locations, artists and information about individual artworks. The database covers the whole Brisbane Council area.[1]