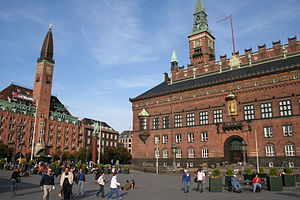 Rådhuspladsen with Palace Hotel and the City hall

The City Hall Square (Danish: Rådhuspladsen) is a public square in the centre of Copenhagen, Denmark, located in front of the Copenhagen City Hall. Due to its large size, its central location and its affiliation with the city hall, it is a popular venue for a variety of events, celebrations and demonstrations. It is often used as a central datum for measuring distances from Copenhagen.

The City Hall Square is located at the south-western end of the pedestrian street Strøget which connects it to Kongens Nytorv, the other large square of the city centre, passing Gammeltorv/Nytorv and Amagertorv along the way. Opposite Strøget, Vesterbrogade extends into the Vesterbro district and later crosses the border to Frederiksberg. H. C. Andersens Boulevard, copenhagen's most heavily trafficated street, and Vester Voldgade pass the square on each there side of the city hall.

The maymarket in 1809. Painting by C. W. Eckersberg

The City Hall Square is located at the site of Copenhagen's old haymarket and the [[Vesterport|Western City Gate with surrounding fortifications.[1]

Detail from map showing the site in 1837

Vilhelm Klein designed an exhibition building for the first exhibition which was built at the corner of Vesterbro Passage which was built from 1870 to 1872. The four-winged, two-storey building was built in red brick to a design which was inspired by Italian Renaissance architecture. In 1879 the centre of the complex was re-nuilt into a large domed exhibition hall.

On 1 January 1888 the haumarket moved to a new location outside Jødbyen, the new cattle and meat market which had opened in 1878. The site is still named Halmtorvet after it. The main venue of the Nordic Exhibition of 1888 was a large timber structure topped by a huge dome with a flag pole at its top. Its architect was the young and unknown Martin Nyrop who was later also to design the new city hall

The new city hall and its square

In the 1880s plans were conceived to build a new city hall on the grounds and in 1888 the expo area was cleared and an architecture competition was held in early 1889. Apart from Nyrop who won the competition, Vilhelm Dahlerup and Valdemar Koch were among the participating architects.[1]

On 28 July 1894, the foundation stone was laid and when it was inaugurated in 1905, the square in front of it became one of the most central and important spaces of the city. 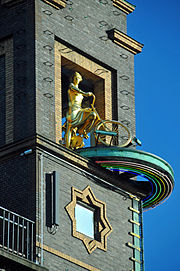 The Wheather Girl with her bicycle

It is often a venue for demonstrations and buskers, and several bars and nightclubs are located in the near vicinity. Rådhuspladsen also houses one of the city's bus centrals.