In City Folk, the player character lives in a rural village populated with anthropomorphic animals, taking part in various activities such as collecting and planting. Similar to other games in the Animal Crossing series the game is synced to the Wii system clock and calendar, allowing the game to be played in real-time and affecting the occurrence of in-game events based on the current time of day or season. City Folk utilizes Nintendo Wi-Fi Connection, allowing players to visit one another's villages via online play. The game is also the first Wii title to be compatible with the Wii Speak accessory, which enables voice chat.

City Folk was officially announced at E3 2008. While the game is one of the best-selling games on the Wii with 3.38 million copies sold worldwide,[1] the game received mixed reviews, gaining aggregate scores of 73 and 73.48% on Metacritic and GameRankings respectively;[2][3] common criticism was directed towards the game's similarity to its predecessor, Animal Crossing: Wild World. 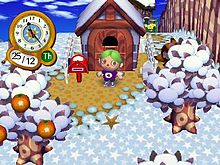 A player's house during winter

Animal Crossing: City Folk's gameplay is built upon the gameplay of previous Animal Crossing games. The Wii Remote pointer and motion controls (including the Nunchuk) can be used for handling tools, such as axes, slingshots, fishing rods, and bug-catching nets.[4] The game also has shovels and watering cans. Players live in individual houses spread apart from each other, unlike Animal Crossing, in which all four houses are located in a central plaza, and Animal Crossing: Wild World, in which all players share one house. Each town begins with six animal residents, and can grow to a maximum of ten. In Animal Crossing for the Nintendo GameCube, up to 15 animal residents can live in a single town, and in Animal Crossing: Wild World, there can be only 8. In previous iterations of Animal Crossing, custom clothing involves a single image that is repeated on the front, back and sleeves; in City Folk, the player can make separate images for each, which is called a "Pro" design.

The player will be able to celebrate as time progresses through several real-world holidays, such as Christmas Eve, Christmas Day, Thanksgiving, Easter, Father's Day, Mother's Day, and Halloween, although they are named differently in the game itself.[5] Holiday-associated characters from previous games return, as well as new additions such as Zipper T. the Easter Bunny, Pavé (a peacock who celebrates "Festivale"), and Nat (a chameleon who hosts the "Bug-off", a bug catching contest).

The city is a new area added to the game. The player can go there by taking a bus from town, driven by Kapp'n, and once at the city, players can buy clothes, get their hair done, go to a theatre and much more. Also, characters may appear in the city such as Phineas (who hands out prizes) and Kicks (who polishes shoes).

Animal Crossing: City Folk is the first Wii game to use Wii Speak, a new microphone option for the Wii that enables voice communication over Nintendo Wi-Fi Connection (WFC). With Wii Speak, all people in a room can communicate with those in another room also containing the device, and can also have live text chat using a USB Keyboard.[6] Players can communicate with other players by sending messages to their town, Wii Message Board, mobile phone, or personal computer.

The game supports Nintendo DS connectivity functionality. Instead of creating a new character, players can import characters from Wild World. Only the character's face, hair (including color and style) and catalog (the items purchasable from Tom Nook) are imported; bells and items owned by the character (including items in the character's inventory, house, town, or dressers) are not transferred. The data in Wild World is not modified when a character is copied to City Folk, so the character can continue to be played on the DS as well. Items from the character's catalog can be repurchased with bells from City Folk.[7] A system error occurred with the Australian version of Let's Go to the City when connecting with the Nintendo DS claiming that it was "the wrong game card". Nintendo Australia allowed gamers to send back their game discs to fix the error to allow compatibility.[citation needed] Additionally, the Nintendo DS can be used to transfer characters between Wii consoles as a means of visiting other player's towns via DS Download Play.

Using WiiConnect24, Nintendo periodically sends out downloadable content, DLC for short, to online players. These range from items to celebrate particular holidays or to commemorate the release of new games. The first item released from Nintendo was the "Red Pikmin Hat". Other items given to players include a "Girl's Day updo" and "Top", Saint Patrick's Day hat, DSi chair (White for EU; black or pink for US), a bag of bells for Tax Day, and a bus model for teacher appreciation week. After summer '09 began, Nintendo sent to North American players a hot dog hat, the dolphin model from Pikmin, ladder shades, a hopscotch flooring, a dresser in the shape of a Nintendo GameCube, a pile of leaves, an election poster, an anniversary cake, and a Wii locker.[8]

These items can be ordered from Nook's catalog provided that they had been downloaded when they were available. In the case of patterns given by Wendell the Walrus, if they were originally Japanese only, then they will keep their Japanese name if used in a European or American version of the game, while regular items will have English names.

The game was announced as a Wii game that markets the WiiConnect24 feature of the console.[9] In a 2006 interview, Katsuya Eguchi, leader of Animal Crossing's production development, stated, "someone could send a letter from their cellphone or from an email address on a PC to the Wii, and then the player living in the town in Animal Crossing could receive that letter."[10] In another interview with IGN, Katsuya Eguchi also discussed how his team continues exploring potential ways to take advantage of the WiiConnect24 feature such as allowing friends to visit other towns or to leave messages while the machine is in standby mode.[11]

The Japanese gaming magazine Famitsu gave it a score of 33/40, lower than the 37/40 scores of its predecessors,[citation needed] while Nintendo Power gave the game an 8.0.[14] Cheat Codes Central gave the game a score of 4.4/5, calling the game great, but too similar to its predecessors.[15] IGN gave the game a 7.5/10, claiming that while the design of the game is sound, they believed it was too much like its DS predecessor to the point of suggesting it to be just a port with enhanced features.[13] 1UP.com gave the game a C grade, claiming "City Folk seems like a missed opportunity to improve and enhance the series in almost every possible way."[12] X-Play gave the game a 4 out of 5, praising the gameplay and the addition of WiiSpeak while finding it too similar to previous titles. The British Official Nintendo Magazine gave the game 90%, saying that the game was "Packed full of Nintendo Charm" and "You'll be playing it for months", but criticized the game as it being "Not new enough for veterans". It was awarded Best Simulation Game for the Wii by IGN in its 2008 video game awards.[16] IGN also nominated it for Best Family Game[17] and Best Online Multiplayer Game.[18] GameSpot also awarded it as being the Least Improved Sequel.[19]