The Bridge House Estates are a charitable trust, established in 1282[citation needed] by the City of London Corporation in the English city of London. It was originally established to maintain London Bridge and, subsequently, other bridges. Funded by bridge tolls and charitable donations, the trust acquired an extensive property portfolio which made it more than self-sufficient. As well as maintaining the bridges, the estates also make other charitable grants through the City Bridge Trust, their grant-making arm.[1]

Since it was established, the trust has maintained, and on several occasions replaced, London Bridge. The trust also built Blackfriars Bridge and Tower Bridge, and purchased Southwark Bridge from the toll-exacting private company that had built it. Most recently it took over ownership and maintenance of the new pedestrian-only Millennium Bridge, having provided a large amount of the funding for its construction.[2]

Until 1995, the trust was only permitted to use its income for expenditure on its bridges. However with a surplus of income over expenditure, a cy-près scheme was adopted in that year to allow any surplus income to be used for other charitable purposes benefiting Greater London. These grants are made though the City Bridge Trust.[2]

The Trust took its name from Bridge House, which was the administrative and maintenance centre of Old London Bridge located on the south bank of the River Thames, near the site of St Olave's Church (since replaced by St Olaf House in Tooley Street). The site was constituted of at least two properties in Southwark. The first was that of Peter de Colechurch the warden of the bridge from 1163 and probably a monastic dwelling. The second property was the house left by will of Henry Fitz Ailwyn, first named Mayor of London, in 1215.

The bridge became part of the City's jurisdiction from 1282, and this led to the City attempting to extend control over Southwark, succeeding in acquiring the 'vill of Southwark' alias the Guildable Manor in 1327. 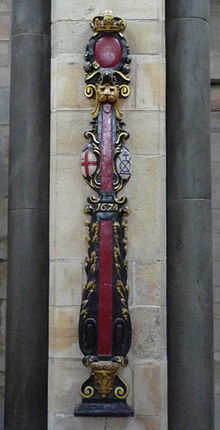 Known as the Bridge Mark, the logo of Bridge House Estates was one of the earliest logos ever in continuous use and can be found carved into stonework in many places along the riverfront. It has been the identifying emblem of the Bridge House Estates for many centuries. but it now uses the City of London arms as an emblem. The City Bridge Trust uses the mark as a logo

It was thought likely that the mark as we know it today was designed by a famous seventeenth century surveyor, William Leybourn, drawn on a plan of 1680 which it is thought he adapted from a similar mark drawn against plots owned by Bridge House Estates on an earlier plan of St George's Fields in Southwark. However, an earlier date on the City sword rest[3] from the church of St Olave, Southwark (now in the north transept of Southwark Cathedral) has a carved date of 1674 and has the Bridge Mark carved onto it to balance the City's shield.

The trust was established by Royal Charter in 1282, and the sole trustee is the City of London Corporation. The trustee does not own the property of the trust — it may only be used for the legitimate purposes for which the fund was created.

The Bridge House Estates are run by a committee of the City of London Corporation ("The City Lands & Bridge House Estates") the chairman of which holds the honorific title of "Chief Commoner" and therefore cannot be an Alderman. The chairmanship is held for only one year as the responsibilities are so onerous.

Originally funded by tolls on London Bridge, the rents and leases of the buildings that were on it and also by charitable donations, the Bridge House Estates acquired an extensive property portfolio which made it self-sufficient.[2]

The Fund administered by the Bridge House Estates is solely responsible for the five City Bridges. There is no financial support from the Government or any other fund. If one of the bridges happened to collapse, the Charity would have to rebuild it out of the endowment. The good stewardship of the property and investments of the Estates by the City has led to the accumulation of surplus funds over any such demand on its resources. Therefore the City sought from the Charity Commission to implement a Cy-près scheme to extend its objects (purposes) since September 1995 to make charitable grants within the Greater London area.[2]