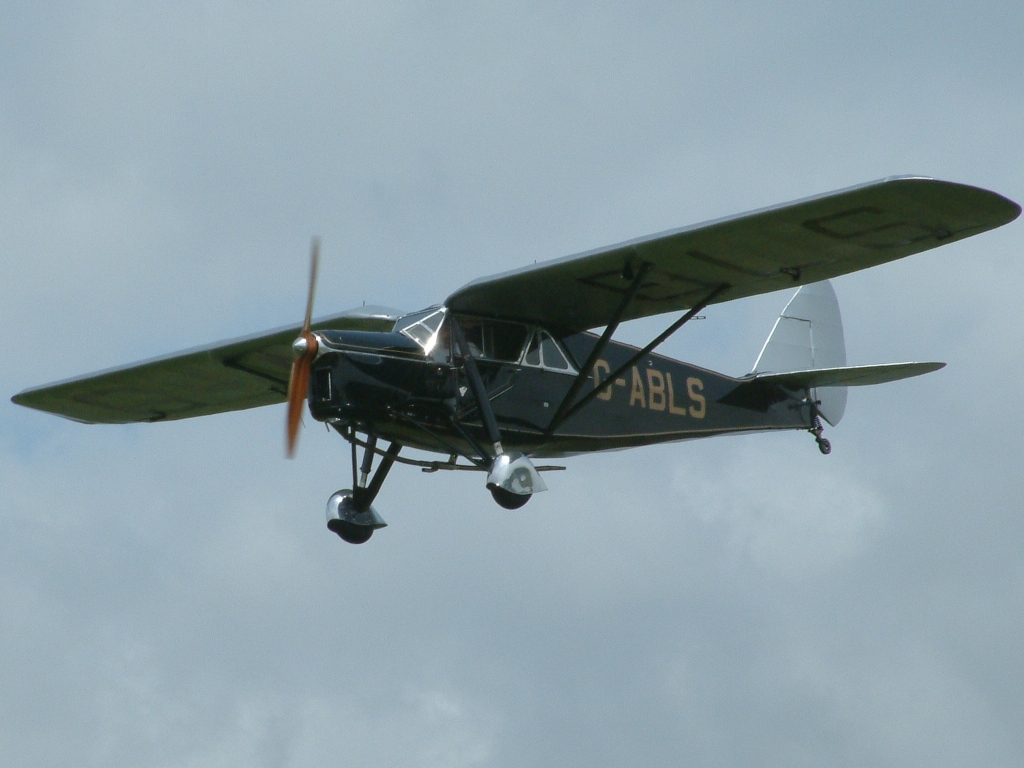 The de Havilland DH.80A Puss Moth is a three seater high-wing aeroplane designed and built by the de Havilland Aircraft Company between 1929 and 1933. It flew at a speed approaching 200 km/h (100 kts), making it one of the highest-performance private aircraft of its era.

The unnamed DH.80 prototype which first flew in September 1929 was designed for the flourishing private flying movement in the United Kingdom. It was a streamlined all-wooden aircraft fitted with the new III inverted inline engine that gave unimpeded vision across the nose without the protruding cylinder heads of the earlier Gipsy II engine.

After the prototype was tested, the aircraft was redesigned with a fabric-covered steel-tube fuselage and as such redesignated the DH.80A Puss Moth. The first production aircraft flew in March 1930 and was promptly sent on a sales tour of Australia and New Zealand. Orders came quickly and in the three years of production ending in March 1933, 259 were manufactured in England. An additional twenty-five aircraft were built by . Most were fitted with the 130 hp Gipsy Major engine that gave slightly better performance.

Most DH.80As were used as private aircraft, though many also flew commercially for both passenger and mail carrying. Seating was normally two although in commercial use two passengers could be carried in slightly staggered seats allowing the rear passenger's legs to lie beside the forward passenger seat.

It was replaced on the production line by the DH.85 Leopard Moth that, with a plywood fuselage, was both cheaper to build and, being lighter, had better performance on the same rather modest 130 horse-power Gipsy Major engine.

Surviving British civilian aircraft were impressed into service during to act as communication aircraft. A small number survive into the early 21st century.

DH.80s were used for a number of record breaking flights during the early 1930s. Early in 1931 made the first flight from England to in G-AAXJ. In July-August 1931 made an eight-day solo flight to in G-AAZI "Jason II". Late in 1931, the Australian Bert Hinkler piloted a Canadian-built CF-APK on a series of important flights including -, Jamaica to , and a 22-hour west-east crossing of the South , only the second solo transatlantic crossing. Most famous of the record breaking Puss Moths was 's G-ABXY "The Heart's Content" which included the first solo east-west Atlantic crossing in August 1932 and the first east-west crossing of the South Atlantic from to in February 1933. His wife Amy Johnson made record flights between England and using G-ACAB "Desert Cloud" in 1932.It was also used in a number of world war 2 battles, including D-day

Early in its career the DH.80A was plagued by a series of fatal crashes, the most famous being to Australian aviator while crossing the in CF-APK on . The cause was eventually pinned down to "flutter" caused by turbulence leading to wing failure - this could be corrected by adding a small strut to the rear wing root fitting. One aircraft took part in the European tourist plane contest, but dropped out due to an engine fault on one of last stages.