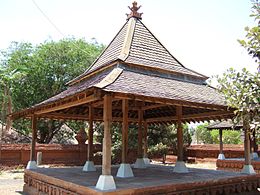 The sultanate lay in the vicinity of the modern-day city of Cirebon on Java's north coast. Today there is four kratons (palaces) in Cirebon; Kraton Kasepuhan, Kraton Kanoman, Kraton Kacirebonan, and Kraton Keprabonan.

Cirebon was part of Sunda kingdom as stated on travel records of Prince Bujangga Manik, a Hindu Sundanese monk who visited all of the holy Hindu sites in Java and Bali at the beginning of the sixteenth century. In his lontar manuscripts, which are saved in the Bodleian Library of Oxford University in England since the sixteenth century, the border of the Sunda kingdom in the west is Sunda Streats and in the east is Cipamali river (present day kali Brebes) and Ciserayu river (present day Serayu River) in Central Java Province.[1]

One source proclaiming the fact is a report from Tomé Pires, a Portuguese explorer. He wrote in his report:

Some people affirm that the Sunda kingdom take up half of the whole island of Java; others, to whom more authority is attributed, say that the Sunda kingdom must be a third part of the island and an eight more. It ends at the river chi Manuk. The river intersects the whole island from sea to sea in such away that when the people of Java describe their own country, they say that it is bounded to the west by island of Sunda. The people hold that whoever passes this strait (the river Cimanuk) into the South Sea is carried off by violent currents and unable to return.[2]