The polarizing filter used with most modern cameras is a circular polarizer. The first stage of the polarizer is a linear filter which filters out light that is linearly polarized in a specific direction. The second stage, for technical reasons related to the auto sensors within the camera, then circularly polarizes the light before it enters the camera.

The polarizing filter has two applications in both color photography and black-and-white photography: it reduces reflections from some surfaces, and it can darken the sky.

Light reflected from a non-metallic surface becomes polarized; this effect is maximum at Brewster's angle, about 56° from the vertical (light reflected from metal is not polarized, due to the electromagnetic nature of light). A polarizer rotated to pass only light polarized in the direction perpendicular to the reflected light will absorb much of it. This absorption allows glare reflected from, for example, a body of water or a road to be much reduced. Reflections from shiny surfaces of vegetation are also reduced. Reflections from a window into a dark interior can be much reduced, allowing it to be seen through. (The same effects are available for vision by using polarizing sunglasses.)

Some of the light coming from the sky is polarized (bees use this phenomenon for navigation[2]). The electrons in the air molecules cause a scattering of sunlight in all directions. This explains why the sky is not dark during the day. But when looked at from the sides, the light emitted from a specific electron is totally polarized.[3] Hence, a picture taken in a direction at 90 degrees from the sun can take advantage of this polarization. Actually, the effect is visible in a band of 15° to 30° measured from the optimal direction.

Use of a polarizing filter, in the correct direction, will filter out the polarized component of skylight, darkening the sky; the landscape below it, and clouds, will be less affected, giving a photograph with a darker and more dramatic sky, and emphasizing the clouds. Perpendicularly incident light waves tend to reduce clarity and saturation of certain colors, which increases haziness. The polarizing lens effectively absorbs these light waves, rendering outdoor scenes crisper with deeper color tones in subject matter such as blue skies, bodies of water and foliage.[4]

The benefits of polarizing filters are largely unaffected by the move to digital photography: while software post-processing can simulate many other types of filter, a photograph does not record the degree of polarization, so the optical effects of controlling polarization at the time of exposure cannot be replicated in software.

A polarizer filters out the polarized component of light from the sky in a color photograph, increasing contrast with the clouds (right).

Polarizer rotated to pass polarized light (left), rotated by 90° to block it (right). 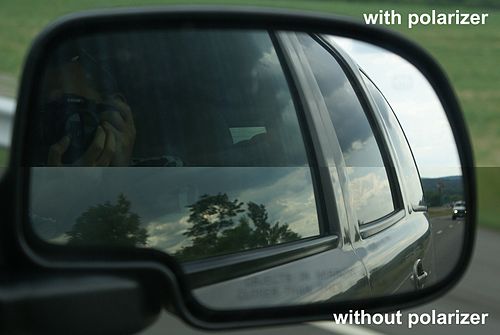 Polarizer rotated to pass polarized light (bottom), and rotated by 90° to block it, suppressing reflections and making it possible to see through the window (top).

Polarizers are often used to improve the appearance of vegetation. In this picture the polarizing filter is used on the left.

Effect of polarizer on light reflected from a surface. The polarizing filter is used on the left.

Effect of polarizer on light reflected from a water surface. The polarizing filter is used on the right.

Video of the effects of a polarizer.

There are two types of polarizing filters generally available, linear and circular. With the exception of how they interact with some autofocus and metering mechanisms, they have exactly the same effect photographically. The metering and auto-focus sensors in certain cameras, including virtually all auto-focus SLRs, will not work properly with linear polarizers because the beam splitters used to split off the light for focusing and metering are polarization-dependent. Circular polarizers include a linear polarizer on the front, which selects one polarization of light while rejecting another, followed by a quarter-wave plate, which converts the selected polarization to circularly polarized light inside the camera, which works with all types of cameras, because mirrors and beam-splitters split circularly polarized light the same way they split unpolarized light.[5] Linear polarizing filters can be easily distinguished from circular polarizers. In the former, the polarizing effect is the same regardless of which side of the filter the scene is viewed from. In the latter, the polarizing effect is quite marked when the scene is viewed from the male threaded side of the filter, but almost non existent when viewed from the other side.