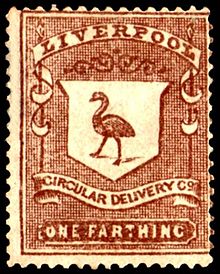 An 1867 one farthing stamp from the Liverpool Circular Delivery Company.

In postal history, a circular delivery company was a type of company which operated in Great Britain between 1865 and 1869 to deliver circulars and other printed matter at rates lower than the British Post Office charged. The service was outlawed in 1869 and a new cheaper postage rate for printed matter introduced in 1870. The stamps issued by the companies are much sought after by philatelists.

Further companies soon sprang up, some of which were connected with Brydone. They included:

The spread of the circular delivery companies soon attracted the attention of the Post Office who had a legal monopoly on the collection and delivery of letters. In August 1867 the Post Office brought a legal action against the London & Metropolitan Circular Delivery Company for infringing their monopoly, which case they won, and the various companies are thought to have stopped operating by September 1867.[1]

The demand for cheaper rates for printed materials was self-evident and on 1 October 1870 the British Post Office issued the first half penny stamp to pay the new reduced charge for printed papers, the small 1/2d bantam.

The stamps appear only in specialist catalogues. Many are thought to have been forged and some may have been produced purely for philatelic purposes and to have never seen genuine use. For these reasons, collectors prefer to collect the stamps on cover, however, such covers are rare. The stamps are classed as cinderellas or stamps for a local post.