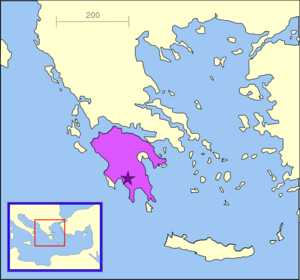 The Despotate of Morea ( _el. Δεσποτάτο του Μορέως) was a province of the which existed between the mid-14th and mid-15th centuries. Its territory varied in size during its 100 years of existence but eventually grew to take in almost all the southern Greek peninsula, the , which was called in the medieval period. It was usually ruled by the current 's heir, who was given the title of "despot" or "despoinis" (in this context it should not be confused with ). Its capital was the fortified city of , near ancient , which became an important centre of Byzantine culture and power.

The Despotate of Morea was carved out of territory seized from the Frankish . This itself had been carved out of former Byzantine territory following the (). In , the Principality's ruler Guillaume II de Villehardouin lost the against the Byzantine Emperor . Guillaume was forced to ransom himself by giving up most of the eastern part of Morea and his newly built strongholds. The surrendered territory became the nucleus of the Despotate of Morea.

A later Byzantine emperor, , reorganized the territory in the mid- to establish it as an for his son . The rival dynasty seized the Morea after Manuel's death in , with becoming despot in . Theodore ruled until , consolidating Byzantine rule and coming to terms with his more powerful neighbours &ndash; particularly the expansionist , whose he recognised. He also sought to reinvigorate the local economy by inviting to settle in the territory.

Subsequent despots were the sons of the Emperor , brother of the despot Theodore: Constantine, Demetrios, and Thomas. As Latin power in the Peloponnesos waned during the , the Despotate of Morea expanded to incorporate the entire peninsula in with territory being acquired through dowry settlements, and the fall of to Constantine. However, in the Ottoman Sultan destroyed the Byzantine defences on the . His attack opened the peninsula to invasion, though Murad died before he could exploit this. His successor "the Conqueror" captured the Byzantine capital in . The despots, Demetrios and Thomas, brothers of the last emperor, failed to send him any aid. Their own incompetence at rule led to an Albanian-Greek revolt against them, when they invited in Ottoman troops to help them put down the revolt. At this time, a number of leading Moreote Greeks and Albanians made private peace with Mehmed. [http://angiolello.net/ARCHONS.pdf] After more years of incompetent rule on the part of the despots, their failure to pay their annual tribute to the Sultan, and finally their own revolt against Ottoman rule, Mehmed came into the Morea in May 1460. By the end of the summer he had achieved the submission of all Byzantine-held cities. The only non-Ottoman territories were held by Venice: the port cities of Modon and Koroni at the southern tip of the Morea, and the Argolid with the Argos and the port of . subsequently handed itself over to Venice at the beginning of the 1464-1478 Ottoman-Venetian war.

Byzantine despots of Morea at Mystras