Clapton in Gordano is a village and civil parish in Somerset, England. It is situated within the Unitary authority of North Somerset on the southern side of the Gordano Valley, immediately adjacent to the M5 motorway. The parish has a population of 347.[1] 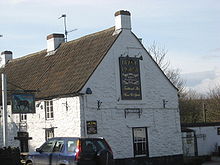 The name Gordano comes from Old English and is descriptive of the triangular shape of the whole valley from Clevedon to Portishead,[2] being the ablative singular of the Latinised form of Gorden meaning muddy valley.[3]

The parish of Clapton was part of the Portbury Hundred.[4]

Half a mile west of the village is a manor house (now a farm). Another notable historic building in the village is The Black Horse pub, a 17th-century inn[5] and former magistrate's gaol.

Sperrings Farm with its 500-year-old listed farmhouse[6] is situated on the outskirts of the village.

The parish council has responsibility for local issues, including setting an annual precept (local rate) to cover the council’s operating costs and producing annual accounts for public scrutiny. The parish council evaluates local planning applications and works with the local police, district council officers, and neighbourhood watch groups on matters of crime, security, and traffic. The parish council's role also includes initiating projects for the maintenance and repair of parish facilities, such as playgrounds and dog fouling, as well as consulting with the district council on the maintenance, repair, and improvement of highways, drainage, footpaths, public transport, and street cleaning. Conservation matters (including trees and listed buildings) and environmental issues are also of interest to the council.

The parish falls within the unitary authority of North Somerset which was created in 1996, as established by the Local Government Act 1992. It provides a single tier of local government with responsibility for almost all local government functions within its area including local planning and building control, local roads, council housing, environmental health, markets and fairs, refuse collection, recycling, cemeteries, crematoria, leisure services, parks, and tourism. It is also responsible for education, social services, libraries, main roads, public transport, trading standards, waste disposal and strategic planning, although fire, police and ambulance services are provided jointly with other authorities through the Avon Fire and Rescue Service, Avon and Somerset Constabulary and the Great Western Ambulance Service.

North Somerset's area covers part of the ceremonial county of Somerset but it is administered independently of the non-metropolitan county. Its administrative headquarters are in the town hall in Weston-super-Mare. Between 1 April 1974 and 1 April 1996, it was the Woodspring district of the county of Avon.[7] Before 1974 that the parish was part of the Long Ashton Rural District.[8]

The parish is represented in the House of Commons of the Parliament of the United Kingdom as part of the Woodspring county constituency which is to become North Somerset at next general election. It elects one Member of Parliament (MP) by the first past the post system of election. It is also part of the South West England constituency of the European Parliament which elects seven MEPs using the d'Hondt method of party-list proportional representation.

Near the village is Clapton Moor, 40 hectares of grassland owned and managed by the Avon Wildlife Trust.

The 13th century church is dedicated to St Michael.[9]

Clapton court was a mansion house and then a farmhouse. The northern elevation dates from the 15th century with the rest of the building dating from the 17th and 19th centuries. It has been designated as a Grade II listed building.[10] In 2009 planning permission was gained to demolish some of the farm buildings and convert others into holiday homes and offices.[11]

Media related to Clapton in Gordano at Wikimedia Commons