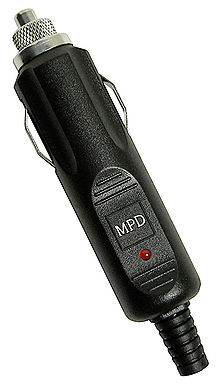 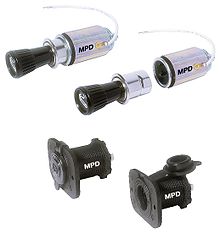 The cigarette lighter receptacle in an automobile, initially designed to power an electrically heated lighter, became a de-facto standard DC connector to supply electrical power for portable accessories used in or near an automobile. Examples of devices that can be operated from a cigarette lighter receptacle include lights, fans, beverage heating devices, and small motorized tools such as compressors for inflating tires. Many portable electronic devices such as music players or mobile telephones use a cigarette lighter receptacle to recharge their internal batteries or to directly operate from the vehicle electrical system. Adapters for electronic devices may change voltage to be compatible with the supplied device. Devices that require alternating-current power at 120 volts or 240 volts can be operated with a plug-in inverter.

Currently, automobiles may provide several 12-V receptacles that are intended primarily to operate accessories and are not to be used with a cigarette lighter. With the declining popularity of smoking in many countries (such as the USA), car manufacturers have stopped including an actual cigarette lighter with new cars, selling them as extra-cost accessories to customers who still want them. Usually, only one 12-V receptacle near the driver will accommodate an actual cigarette lighter, with the remaining receptacles (if present) being designated as "12-V auxiliary power outlets".

While the cigarette lighter receptacle is a convenient and nearly universal feature of automobiles, as a DC power connector it has the disadvantage of relatively low current rating and poor contact stability.

In the United States cigar lighters started appearing as standard equipment in automobiles in 1925/26.[1] In 1928 the Connecticut Automotive Specialty Company in Bridgeport patented the first automotive cigar lighter with cord and reel. The modern "automatic" automotive V-Coil lighter was developed by Casco in 1956.[2]

In the reel-type lighters, the igniter unit was connected with a source of current by a cable which was wound on a spring drum so that the igniter unit and cable could be withdrawn from the socket and be used for lighting a cigar or cigarette. As the removable plug was returned to the socket, the wires were reeled back into it. The circuit was closed either by pressing a button or removing the igniter from its socket.[3]

In 1921, the Morris U.S. Patent 1,376,154 was issued for a so-called "wireless" or "cordless" lighter. This lighter eliminated the cables and the mechanism for winding and unwinding them. The igniter was heated in the socket then removed for use.[3]

Use as a lighter 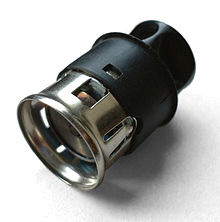 The traditional lighter is a metal or plastic cylinder containing a thin coil of nichrome wire, through which high current (~10 amperes) passes when the device is activated, usually by pushing it into the socket as though it were a button. When pushed in, the lighter is held against the force of a spring by a hook attached to a bi-metallic strip.[4] The heating element becomes glowing orange hot in seconds, causing the bimetallic strip to bend and unhook the mechanism, and the handle pops out. If the lighter is then promptly removed from its socket, it is capable of setting cigarettes, cigars and tinder (among other things) on fire.

In newer cars, the socket often ships with a plastic dummy plug, without the lighter heating element due to declining popularity (and legality) of smoking.[5] However, the socket continues to exist to power consumer electronics in cars as the primary purpose. Often, a vehicle may come with several outlets for convenience, some in the rear passenger area of the vehicle. Even the cargo area may be supplied with sockets for such purposes as powering portable GPS devices, recharging telephones, or powering a tire pump or a vacuum cleaner. These usually have a plastic cap tethered to them, and are usually labeled as being only for DC power since they are not intended to withstand the heat produced by an electric cigarette lighter.

Use as an electrical outlet

Twelve volt automobile plugs are standardized in the United States by the "UL standard 2089" regarding vehicle battery adapters. This standard covers plugs and cord sets that insert into cigarette lighter receptacles. In Europe, 12 volt plugs and sockets are regulated and require approvals to be able to display the CE mark.

The sockets and mating plugs are defined in the ANSI/SAE J563 specification.

12 volt auto connectors are made to comply with a standard by Underwriters Laboratories for safety. UL2089 was developed to cover the requirements for portable adapters rated 24 V DC or less that are intended to be supplied from the battery powered electrical system of a vehicle. Products covered by the standard include cord assemblies of a plug that mates with the standard cigarette receptacle found in automobiles.

Plugs often include a pilot light to indicate a connection has been made.

Since the cigar lighter socket was designed to heat a cigar lighter, using these sockets as power connectors can lead to many problems. In addition to the issues with incompatible sizes, plugs can vibrate out of the socket under normal driving conditions, owing to poor retention. There have been reports of melted plug tips.[6]

A second problem is that nominally "Twelve-Volt" power in cars fluctuates widely. The actual voltage will be approximately 12.5 volts when dormant, (less when cold) approximately 14.5 volts when the engine and the alternator/generator are operating, (more when cold) and may briefly drop as low as 5-6 volts during engine start.[7] DC/DC converters will usually compensate for these small fluctuations.

Rarely, more extreme cases of voltage fluctuation can occur when the car battery is disconnected while the engine is running, or when the car receives a jump start. When the battery is disconnected, a load dump transient can produce very high voltages. A car receiving a jump start from a truck will be subject to its 24 V electrical system.[8] A "double battery jump-start" is performed by some tow truck drivers in cold climates.[9]

Design wise one has to take into account intermittent contact, and voltages outside the nominal 12 V DC like top voltage 9-16 V continuously, top voltage at 20 V during 1 hour, 24 V during 1 minute, 40 V during 400 ms.[10] Protection component tolerance example ratings are +50 to -60 V DC[11] Additionally, issues can occur with temperatures varying between -40 till +85 °C such as humidity and condensation.[10] Equipment connected this way must tolerate large variations in electrical- and climate environment.