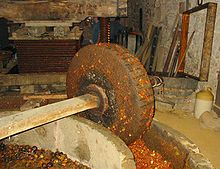 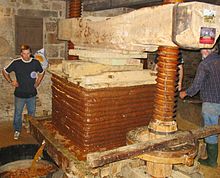 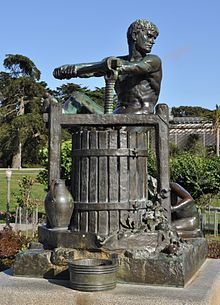 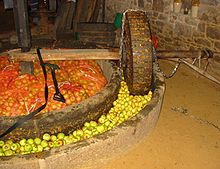 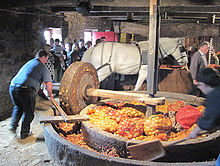 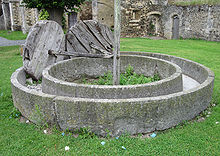 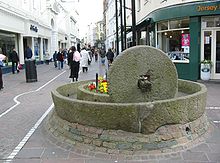 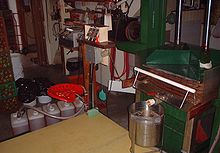 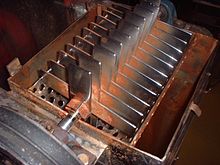 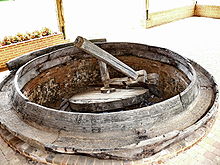 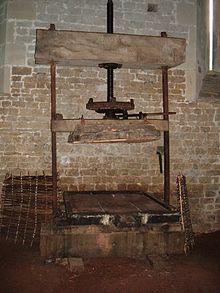 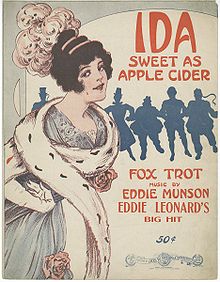 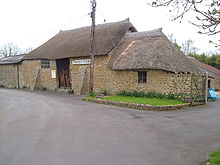 A Cider mill refers to the location, structure, or machinery used to crushed apples into apple juice for use in making apple cider, applejack, hard cider, apple wine, pectin and other products derived from apples. The mills used to manufacture the juice products, ferment them, store them and ship them, are usually located near apple orchards. Historically, the types of structure and machinery have varied greatly—including horse powered, water driven, and machine operated mills. The presses can be fixed or portable.

Some mills allow custom pressing of a farmer's apples. In this way, apple varieties can be blended to make a cider of mixed juice types, for instance, a combination of sweet and aromatic juices. Various types of apple are recommended for cidering. (page 103) Alcoholic cider can also be produced and is known as hard cider or applejack.[1] Cider is stored and fermented in wooden barrels, carboys, and glass jugs.(page 165)

In 19th Century New England, apple farmers paid a mill owner a fee to crush apples into juice. A typical cider mill would look like many other small barns and sheds, with a set of large doors in the center of the longer side. Most cider mills were 20-30' long by 20-25' in width.[2]

The equipment in a cider mill consisted of the nut mill or crusher, and the press. The working parts of the nut mill were two wood cylinders (the nuts), one with teeth and the other with corresponding slots. The nuts were set vertically into a frame with feed and collecting troughs. One nut had a large drive shaft, extending above the frame, which was attached to a sweep eight to eleven feet long. A horse, harnessed to the long sweep, would turn the cylinders which meshed together and ground the apples to a pulp. This pulp, or pumace, was usually left in the trough over night to mellow before being transferred to the press, at the opposite side of the building. The crushed apples were piled in layers with straw in between on the base of the press. This pile, called a cheese, would then be squeezed by the pressure created by lowering screws with levers, and the filtered juice would flow into barrels.

Cider mills have been subject to legal proceedings over whether they were "fixed to freeholds"[3] and other cases addressing legal designation as to what kind property a cider mill is.[4]