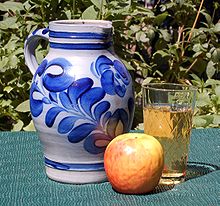 Cider in Germany is called Apfelwein (German, apple wine), as the German language has not used the word cider.[1] It is also regionally known as ebbelwoi, äppler, stöffsche, apfelmost (apple must), viez (from Latin vice, the second or substitute wine), and saurer most (sour must). It has an alcohol content of 5.5%–7% and a tart, sour taste. The name äppler, mainly used by large producers, is generally not used in restaurants or by smaller manufacturers who instead call the beverage schoppen or schoppe which refers to the measure of the glass. The cider is mainly made from eating or cooking apples, such as Granny Smith and Bramley; and, in the Frankfurt area, berries from the Service Tree (Sorbus domestica), are added in bags to increase astringency,[2] this specific type of apfelwein is called Speierling.

Apfelwein is made from pressed apples. The juice or must is fermented with yeast to produce an alcoholic beverage usually around 6% abv. Apfelwein can be made with the addition of the unprocessed juice from the fruit of a small, indigenous tree known as Speierling (Sorbus domestica) or Speyerling, an endangered species that is easily confused with the wild apple.

Apfelwein is mainly produced and consumed in Hesse (where it is the state beverage), particularly in the Frankfurt, Wetterau and Odenwald areas. It is also found in Moselfranken, Merzig (Saarland) and the Trier area; as well as the lower Saar area and the region bordering on Luxembourg. In these regions there are several large producers as well as numerous small, private producers who use traditional recipes. Some of the most famous restaurants where Apfelwein is served are in Sachsenhausen (Frankfurt am Main). In some of these regions there are regular cider competitions and fairs, in which the small, private producers participate. Cider songs are composed and sung at these events. The Merzig region crowns a Viez Queen, and the lower Saar area a Viez King.

Apfelwein may be served in a "geripptes", a glass with a lozenge cut that refracts light. The size of the geripptes glass is usually 0.25 litre although there is a larger variant that holds 0.3 litre, as well as a glass that holds the doubled amount of 0.5 litres. Traditional Apfelwein restaurants and their habitual guests generally hold to the 0.3-litre standard. Therefore a 0.25l glass is often named a "beschisserglas" (rip-off glass) as it contains less Apfelwein for the same price. The serving of Apfelwein in other kinds of glasses (for example, longdrink glasses) is rare. A geripptes filled with Apfelwein is also called a "schoppen".

Apfelwein is also available in the bembel (a specific Apfelwein jug). The paunchy jar (made from salt-glazed stoneware) usually has a basic grey colour with blue detailing. The different sizes are usually designated after their contents in glasses (for example "4er" (vierer) or "8er" (achter) bembel, the small 0.25 litres or the 0.3 litres of glasses are taken as a basis depending upon place of use. Accordingly, a 4er bembel can contain 1 litre, or 1.2 litres of Apfelwein). In the Eifel region, near Hunsrück, around Moseltal, along the lower Saar and in Trier, the drinking container is called "viezporz" and consists of white porcelain or stoneware. Hot Apfelwein is commonly taken as an old household remedy against colds, or as a warming beverage in the cold season. The Apfelwein is heated and served with a cinnamon stick, possibly with cloves and/or a slice of lemon.

An official Viez route, (Route du Cidre) connects Saarburg with the border to Luxembourg. Also an annual Viez Fest is celebrated in Merzig. The date is usually the second Saturday in October.

The most common cocktail is the "sauergespritzer", which is apfelwein blended with 30% mineral water. The "tiefgespritzter" or "batschnasser" are varieties which use more mineral water. Also common is the "süssgespritzer", which is Apfelwein blended with lemon soda, orange soda or fresh-pressed apple juice (lemon soda being the most common). Less commonly, Apfelwein is blended with cola, and is referred to as a KE (for Kola-Eppler); in Frankfurt am Main it is known as a "Korea", while east of Frankfurt the names "panzer" ("tank") or "panzersprit" ("tank fuel") are used. Rarer still, Apfelwein can be mixed with beer. This combination is named "bembelschlabber", similar to a snakebite.