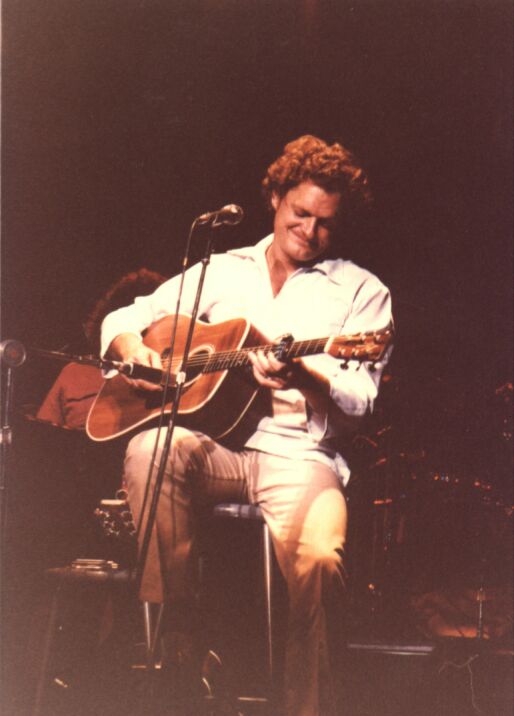 Harry Forster Chapin (, – , ) was an American singer, , and who fought to end world hunger.

Chapin was born in , the second of four children born to Jeanne Elspeth (née Burke) and . His parents divorced by 1950, with Elspeth keeping custody of their four sons, as Jim spent much of his life on the road as a drummer for Big Band era acts such as . She married "National Films in Review" magazine editor Henry Hart a few years later.

Chapin's first formal introduction to music was while singing in the . It was here that Harry met Big John Wallace, a tenor with a five-octave range, who would later become his bass player and background singer. He began performing with his brothers while a teenager, with their father occasionally joining them on drums.

Chapin graduated from in 1960, and was among the five inductees in the school's Alumni Hall Of Fame for the year 2000. He briefly attended the and was then an intermittent student at . He did not complete a degree.

He originally intended to be a documentary film-maker, and directed "" in 1968, which was nominated for a documentary Academy Award. In 1971, he decided to focus on music. With Big John Wallace, Tim Scott and , Chapin started playing in various local s in .

Following an unsuccessful early album made with his brothers, Tom and Steve, Chapin's debut album was "" (1972, #60), which was a success thanks to the single "Taxi" (#24). Chapin later gave great credit to WMEX-Boston radio personality for being the DJ who "discovered" this single, and pushed the air play of this song amongst fellow radio programmers in the U.S.fact|date=July 2008

However, Chapin's recording future became somewhat of a controversy between two powerful record companies headed by two very powerful men, of and of Columbia. According to Chapin's biography "Taxi: The Harry Chapin Story" by , Chapin had agreed in principle to sign with Elektra Records on the grounds that a smaller record label would give greater personal attention to his work. Clive Davis, however, remained undaunted, doubling almost every cash advance offer Chapin received from Holzman. Despite a cordial relationship with Holzman, Davis had a long history of besting Holzman over the years to particular artists, but this was one time that he did not prevail.

Chapin ultimately signed with Elektra for a smaller advance, but with provisions that made it worth the move. The biggest stipulation in the nine-album deal was that he receive free studio time, meaning he paid no recording costs. It was a move that would ultimately save Chapin hundreds of thousands of dollars over the term of his contract and set a precedent for other musicians.

"This was completely unheard of," said Davis in the Coan book. "There was no such thing as free studio time."

Chapin's follow-up album, "" (1972, #160), was less successful despite containing the Chapin anthem "Circle" (a big European hit for ). His third album, "Short Stories" (1974, #61), was a major success. "" (1974, #4), released soon after, was even more successful, bolstered by the chart-topping hit single "", based upon a poem by his wife. Sandy Chapin had written the poem inspired by her first husband's relationship with his father and a country song she heard on the radio. [ [http://www.harrychapin.com/circle/winter04/behind.htm "Mike Grayeb, Behind The Song: Cat's In The Cradle" ] Circle!] When Harry's son Josh was born, he got the idea to put music to the words and recorded the result. "Cat's in the Cradle" was Chapin's only number one hit, shooting album sales skyward and making him a millionaire.

He also wrote and performed a Broadway musical "". Additionally, Chapin wrote the music and lyrics for "", a musical by Tom Key based on 's book "The Cotton Patch Version of Matthew and John". The original cast soundtrack was produced by Tom Chapin, and released in 1982 by Chapin Productions.

Chapin's only UK hit was "", which reached #34 in 1974. His popularity in the UK owed much to the championing of disc jockey . The song's success in the U.S. was championed by WMEX jock and friend of Chapin's who in part inspired the song.fact|date=July 2008 The national appeal of the song was a result of disc jockeys playing it for themselves, since the song dealt with a much-traveled DJ, problems in his personal life, and his difficulty with ageing in the industry. This song was also a significant inspiration (though not the only one) for Hugh Wilson, who created the popular television series about DJs and radio, "".fact|date=August 2008

Chapin's recording of "The Shortest Story", a song he wrote about a dying child and featured in his 1976 live/studio album "", was named by author Tom Reynolds in his book "I Hate Myself and Want to Die" as the second most depressing song of all time (just behind "").

By the end of the decade, Chapin's contract with Elektra (which had since merged with Asylum Records under the control of ) had expired, and the company made no offer to renew it. A minor deal with Casablanca fell through, and Chapin settled on a simple one-album deal with Boardwalk Records. The Boardwalk album, though no one knew it at the time, would be his final work.

The title track of his last album, "Sequel", was a follow up to his earlier song "Taxi", reuniting the same characters ten years later. The songs Chapin was working on at the time of his death were subsequently released as the thematic album "".

Chapin met Sandy Gaston, a New York socialite nine years his senior, in 1966, after she called him asking for music lessons. They married two years later. The story of their meeting and romance is told in his song "". He fathered two children with her, Jennifer and Joshua, and was stepfather to her three children by a previous marriage.

Chapin was resolved to leave his imprint on Long Island. He envisioned a Long Island where the arts flourished and universities expanded and humane discourse was the norm. "He thought Long Island represented a remarkable opportunity," said Chapin's widow, Sandy. [cite journal |title=More than a Troubadour |journal=Newsday |url=http://www.newsday.com/community/guide/lihistory/ny-history-hs9chap,0,6013734.story |accessdate=2008-01-18 |first=Fred |last=Bruning]

Chapin served on the boards of the Eglevsky Ballet, the Long Island Philharmonic, Hofstra University. He energized the now-defunct Performing Arts Foundation (PAF) of Huntington.

In the mid-1970s, Chapin focused on his social activism, including raising money to combat hunger in the United States. His daughter Jen said: "He saw hunger and poverty as an insult to America"

Chapin's social causes at times caused friction among his band members and manager . Chapin donated an estimated third of his paid concerts to charitable causes, often performing alone with his guitar to reduce costs.

One report quotes his widow saying soon after his death - "only with slight exaggeration" - that "Harry was supporting 17 relatives, 14 associations, seven foundations and 82 charities. Harry wasn't interested in saving money. He always said, 'Money is for people,' so he gave it away." Despite his success as a musician, he left little money and it was difficult to maintain the causes for which he raised more than $3 million in the last six years of his life ["Harry Chapin's Family Fights to Carry On His Extraordinary Legacy of Compassion", Gioia Diliberto, "People", March 15, 1982] . The was the result.

On Thursday, , , just after noon, Chapin was driving on the , in the left hand fast lane, at about convert|105|km|mi per hour on the way to his concert. For some reason, either because of engine failure or some physical problem (thought to be a possible ) he put on his emergency flashers near Exit 40 in . He then slowed to about convert|24|km|mi per hour and veered into the center lane, nearly colliding with another car. He swerved left, then to the right again, ending up directly in front of a . The truck could not brake in time and rammed the rear of Harry's blue 1975 , rupturing the gas tank and causing it to burst into flames.

The driver of the truck and a passerby were able to get Harry out of the burning car through the window and by cutting the seat belts before the car was completely engulfed in flames. He was taken by police helicopter to the hospital where ten doctors tried for 30 minutes to revive him. A spokesman for the Nassau County Medical Center said Chapin had suffered a heart attack and "died of cardiac arrest" but there was no way of knowing whether it occurred before or after the accident. In an interview years after his death, Chapin's daughter said "My dad didn't really sleep, and he ate badly and had a totally insane schedule."

Even though Chapin was driving without a license, his driver's license having previously been revoked for a long string of traffic violations, his widow Sandy won a $12 million decision in a negligence lawsuit against the owners of the truck.

On , , Harry Chapin was posthumously awarded the for his campaigning on social issues, particularly his highlighting of hunger around the world and in the United States. His work on hunger included being widely recognized as a key player in the creation of the Presidential Commission on World Hunger in 1977.

A of Chapin entitled "Taxi: The Harry Chapin Story", by Peter M. Coan, was released following his death. Although Chapin had cooperated with the writer, following his death the family withdrew their support. There is some debate about the accuracy of the details included in the book.

Despite seeming social and political differences with Chapin, often quotes the entirety of "Cat's In The Cradle" to illustrate dynamics of contemporary American families. "Cat's In The Cradle" was also re-recorded by group in 1992 and once again topped the charts. A country version was also recorded by in 1995. It was sampled by Canadian singer , and subsequently by of in 2006 after the rapper's discovery that he was adopted in infancy. also recorded an "updated" version of the song entitled "Revenue".

Harry Chapin was inducted into the on .

The rock band M.O.D. wrote an irreverent song about Harry Chapin's death called "Ode To Harry". Hector released a Finnish-language cover version of his song "Six String Orchestra". The cover can be heard under the name "Monofilharmoonikko" as the sixth track of the 1977 album "H.E.C."; it was released as a single as well.

A graduate student apartment complex, Harry Chapin Apartments at on Long Island, is named after Chapin.

The Lakeside Theatre at Eisenhower Park in East Meadow,NY was renamed "Harry Chapin Lakeside Theatre" during a memorial concert held one month after his death, as a tribute to his efforts to combat world hunger.

The comedy team The Smothers Brothers have often performed a version of "Six String Orchestra" when they tour and perform with local symphonies. The song usually takes about 10 to 15 minutes to complete as they stop and banter back and forth. Dick usually stops the song to sarcastically tell Tommy what great guitar playing he did.

In the film "One Trick Pony" musician Paul Simon portrays Jonah, an aging rock star famous for a 1960s protest song. In one scene Jonah is approached at an airport by Hare Krishna followers. To their "Hare Krishna?" Jonah responds "Harry Chapin".

Notable musicians in their own right, Tom and Steve Chapin sometimes performed with Harry throughout his career, as is especially evident on the live albums "" and "". He also performed with them before his solo career took off, as seen on the album "" Chapin's family members and other longtime bandmates have continued to perform together from time to time in the decades since his death.

* "The Book Of Chapin"
* "You Are The Only Song (also known as The Final Concert)"
* "Rockpalast Live"
* "Remember When: The Anthology"