The Churchill Falls Generating Station is a hydroelectric power station located on the Churchill River in Newfoundland and Labrador. The underground power station can generate 5,428 MW, which makes it the second-largest in Canada, after the Robert-Bourassa generating station. The generating station was commissioned between 1971 and 1974. The facility is owned and operated by the Churchill Falls Labrador Corporation Limited (CFLCo), a joint venture between Nalcor Energy (65.8%) and Hydro-Québec (34.2%). 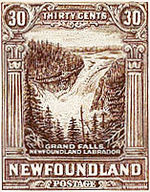 The Innu were early travellers to the site. To them, it was known as Patses-che-wan, "the narrow pass where the waters drop".[1]

In 1915, the Quebec Streams Commission sent engineer Wilfred Thibaudeau survey the Labrador Plateau, then a part of Quebec. Thibodeau was impressed by the site and engineered a channel scheme which could be used to divert the water from the river before it arrived at the falls. The scheme would use the natural capacity of the basin, thereby eliminating the need for the construction of massive dams.[1]

Newfoundland obtained jurisdiction over Labrador in a 1927 ruling of the Judicial Committee of the Privy Council. In 1947, Commander G.H. Desbarats, under the direction of the Newfoundland Government, completed a preliminary survey that confirmed Thibaudeau's findings. However, development did not proceed due to the inhospitable terrain, the severe climatic conditions, the geographic remoteness, the long distance transmission requirement and the lack of markets for such a large block of power.

In August, 1949, Joey Smallwood, Premier of Newfoundland, had the opportunity to see Churchill Falls for the first time and it became his obsession to develop the hydroelectric potential of the falls.

Smallwood, who was well known in the British capital, travelled to London in the fall of 1952 to promote investment in Canada's newest province. His pitch was well received by the British Prime Minister, Winston Churchill, who later introduces Edmund Leopold de Rothschild, of the N M Rothschild & Sons investment bank.[1][2]

In 1953 British Newfoundland Development Corporation (Brinco) was formed by the Rothschilds and six partners: two paper companies: Bowater and Anglo-Newfoundland; a manufacturer, English Electric; and mining concerns Rio Tinto, Anglo American and Frobisher.[3] The new company aimed to do extensive exploration of the untapped water and mineral resources of the area. With the development of the iron ore mines in western Labrador and Schefferville and the construction of the Quebec North Shore and Labrador Railway in 1954, development of Hamilton Falls — as they were then known — as a power source, became feasible.

Brinco's efforts were facilitated by a Principal Agreement signed with the Newfoundland government granting it the right to explore the province's natural resource potential. In return, Brinco committed to invest $5 million over 20 years on exploration and to pay an 8% royalty on net profits before taxes.[1]

Among the issues facing the would-be developers in the 1950s, the recruitment of customers for the output of the plant was high on the list of concerns. A few options were considered by Brinco officials. As early as 1955, Brinco's CEO, Bill Southam calls on Robert J. Beaumont, president of the Shawinigan Water & Power Company (SWP), Quebec's largest power company at the time, to push the project to Premier Maurice Duplessis and to government-owned utility Hydro-Québec. Brinco's offers were summarily dismissed by the Union Nationale premier, who had already committed towards Hydro-Québec building its own power projects in Quebec, such as the Bersimis-1 and Bersimis-2 generating stations, rather than importing electricity.[1][4]

SWP was an early supporter of the project. As early as 1954, the company's planners did consulting work on the project for Brinco. But SWP had other reasons. Facing a rapidly increasing demand, and having been denied the possibility of developing the Bersimis River in 1951, its officials were eager to find new energy resources to meet rapidly increasing demand.[5] This is why Shawinigan Engineering, a subsidiary of SWP, agreed to become a partner in the entreprise.[6] In 1958, SWP was granted a 20% share of the venture, called Hamilton Falls Power Corporation, for a C$ 2.25 million investment.[7]

As was the long-standing practice in Quebec's power generation business,[8] Brinco tried to recruit "anchor" customers for the large amount of power they would add to supply. Its officials made pitches to large industrial power users, but aluminium companies Alcan, Alcoa and British Aluminium all rejected the possibility of building smelters in Labrador. The United Kingdom Atomic Energy Authority decided against building an uranium enrichment plant in the area.[1]

The second solution was selling the power to other jurisdictions. But, exporting power to Ontario and the Northeastern United States also had its set of problems. Ontario Hydro felt that generating electricity in-province using nuclear power would be cheaper than building costly long-distance transmission lines from Labrador to Ontario through Quebec. Brinco and its power subsidiary were also wary of the political implications such a line would have in Quebec. On top of all these problems, selling the power in the U.S. was complicated by the National Energy Board stance against long-term power export contracts[1]

The death of Maurice Duplessis, in September 1959, raised hopes of a change of attitude in Quebec. Brinco's representatives met with the new Quebec premier, Paul Sauvé, in the fall of 1959. However, the talks stalled as Sauvé died early in 1960.[9]

The government of Quebec considered the inland watershed of Labrador to be part of their province and fought a long but losing legal battle to prevent granting the territory to Newfoundland at the Judicial Committee of the Privy Council.

Financing of the project

After years of planning, the project was officially started on July 17, 1967. The machine hall of the power facility at Churchill Falls was hollowed out of solid rock, close to 1,000 ft (300 m) underground. Its final proportions are huge: in height it equals a 15-storey building, its length is three times that of a Canadian football field. When completed, it housed 11 generating units, with a combined capacity of 5,428 MW (7,279,000 hp). Water is contained by a reservoir created not by a single large dam, but by a series of 88 dikes that total64 km (40 mi) in length. At the time, the project was the largest civil engineering project ever undertaken in North America.[10]

The drainage area for the Churchill River includes much of western and central Labrador. Ossokmanuan Reservoir which was originally developed as part of the Twin Falls Power System also drains into this system. Churchill River's natural drainage area covers over23,300 sq mi (60,000 km2). Once Orma and Sail lakes' outlets were diked, it added another 4,400 sq mi (11,000 km2) of drainage for a total of 27,700 sq mi (72,000 km2). This makes the drainage area larger than the Republic of Ireland. Studies showed this drainage area collected410 mm (16 in) of rainfall plus 391 cm (154 in) of snowfall annually equalling 12.5 cu mi (52 km3) of water per year; more than enough to meet the project's needs. Construction came to fruition on December 6, 1971, when Churchill Falls went into full-time production.

The generating station is owned by the Churchill Falls (Labrador) Corporation Ltd. — whose shareholders are Nalcor (65.8%) and Hydro-Québec (34.2%) —[11] and operated by the Newfoundland and Labrador Hydro company.

The division of profits from the sale of electricity generated at the plant has proven to be a very sensitive political issue in Newfoundland and Labrador, with many considering the share accorded to Hydro-Québec "an immense and unconscionable windfall."[12]

The Government of Newfoundland and Labrador has twice challenged the contract in court, with both challenges failing.[13] Additionally, in 1984 the Supreme Court of Canada ruled that a proposal by Newfoundland to divert water away from the falls was illegal.[11]

According to former Premier Brian Tobin, as Labrador only borders Québec, when an agreement was being negotiated to sell the power generated at Churchill Falls, the power either had to be sold to an entity within Québec or it had to pass through Québec. The government of Québec refused to allow power to be transferred through Québec and would only accept a contract in which the power was sold to Québec.[14] Because of this monopsony situation, Hydro-Québec received very favourable terms on the power sale contract. The contract was negotiated to run for a 65-year timespan, running until the year 2041, and according to former Newfoundland Premier Danny Williams, Hydro-Québec reaps profits from the Upper Churchill contract of approximately $1.7 billion per year, while Newfoundland and Labrador receives $63 million a year.[15]

According to long-time Hydro-Québec critic Claude Garcia, former president of Standard Life (Canada) and author of a recent assessment of the utility commissioned by the Montreal Economic Institute, if Hydro-Quebec had to pay market prices for the low-cost power it got from the Churchill Falls project in Labrador, the 2007 profit would be an estimated 75 per cent lower. Newfoundland and Labrador will get back all the rights to the project in 2041 when the contract expires.[16]

The Churchill Falls hydroelectric plant development was undertaken in the absence of any agreement with the aboriginal Innu people of Labrador. The construction involved the flooding of over 5,000 km2 (1,900 sq mi) of traditional hunting and trapping lands. A recent agreement signed between the government of Newfoundland and Labrador and the Innu offered the Labrador Innu hunting rights within 34,000 square kilometres of land, plus $2 million annually in compensation for flooding.

View of Churchill Falls, the electrical substation, and the three 735 kV lines that span the river gorge 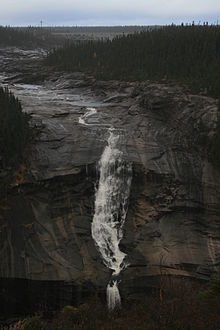 Churchill Falls as it appeared in 2008, four decades after the water was redirected.