Old Goa
This article is about the UNESCO World Heritage Site. For the town in North Goa, see Goa Velha.

Old Goa (Konkani: Goem/ गॉय/ Adlem Gõi/ Pornnem Gõi/ Saibachem Goem[citation needed]) or Velha Goa (Velha means "old" in Portuguese) is a historical city in North Goa district in the Indian state of Goa. The city was constructed by the Bijapur Sultanate in the 15th century, and served as capital of Portuguese India from the 16th century until its abandonment in the 18th century due to plague. The remains of the city are a UNESCO World Heritage Site. 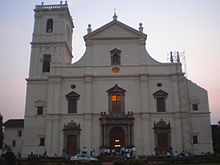 Cathedral of the Archdiocese of Goa e Damão

The name Old Goa was first used in the 1960s in the address of the Konkani monthly magazine, dedicated to spread the devotion of the Sacred Heart, Dor Mhoineachi Rotti which was shifted to the Basilica de Bom Jesus in 1964. Postal letters were returned to the sender, as the name "Old Goa" was unknown then, according to then and long time editor of the monthly, the great Goan historian late Padre Moreno de Souza, SJ.

The village panchayat uses the name Sé-Old Goa, while the post office, Archaeological Survey of India use the name Velha Goa. The place is called as Saibachem Goem (referring to St. Francis Xavier as Saib i.e. Master), Pornem Goem, Adlem Goem or just Goem in Konkani[citation needed]. The name Velha Goa should not be confused with another former Goan capital Goa Velha, lying some villages away in the south. The names Vhoddlem Goem and Thorlem Goem [1] refers to Goa Velha, while Goem besides referring to Velha Goa i.e. Old Goa also refers to the whole state of Goa in some contexts.

The city was founded in the 15th century as a port on the banks of the Mandovi river by the rulers of the Bijapur Sultanate. The city was built to replace Govapuri, which lay a few kilometres to the south and had been used as a port by the Kadamba and Vijayanagar kings. Old Goa was the second capital of Bijapur under the rule of Adil Shah. It was surrounded by a moat and contained the Shah's palace, and his mosques and temples. The city was captured by the Portuguese, and was under Portuguese rule from 1510 as the administrative seat of Portuguese India. The Viceroy's residence was transferred in 1759 to the future capital, Panaji (then Pangim), at the time a village about 9 kilometres to its west.

The population was roughly 200,000 by 1543. Malaria and cholera epidemics ravaged the city in the 17th century and it was largely abandoned, only having a remaining population of 1,500 in 1775. It was then that the viceroy moved to Pangim. It continued to be the de jure capital of Gôa until 1843, when the capital was then shifted to Pangim (Ponnjê in Konkani, Nova Goa in Portuguese and Panjim in English). The abandoned city came to be known as "Velha Goa" (in Portuguese, 'Old Goa'), to distinguish it from the new capital Nova Goa (Panjim) and probably also Goa Velha (also meaning "Old Goa"), which was the Portuguese name for the town located on the old site of Govapuri.

Velha Goa was incorporated into the Republic of India in 1961, together with the rest of Goa. 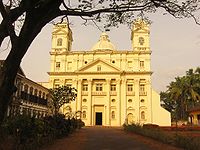 Old Goa contains churches affiliated to various congregations, including the Se Cathedral (the seat of the Archbishop of Goa), the Church of St. Francis of Assisi, the Church of S. Caetano, and notably, the Basilica of Bom Jesus which contains the relics of Saint Francis Xavier, which is celebrated every year on 3 December with novenas beginning on 24 November.