Church of the East in China 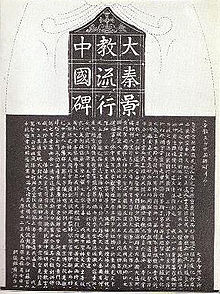 The Nestorian Stele, erected in Chang'an 781.

The Church of the East in China had a long but not continuous history between the 7th and 14th centuries. The Church of the East, or Nestorian Church, was the first church to spread Christianity to China.[1] Chinese sources describe a mission under the Persian cleric Alopen as arriving at Chang'an in 635 and establishing a church that flourished under the Tang Dynasty (618 – 907). Nestorian artifacts such as the Daqin Pagoda, the Jesus Sutras, and the Nestorian Stele testify to the place of church in Chinese society at the time. The Church of the East in China faded with the fall of the Tang Dynasty, and did not return until the Mongol invasion, which culminated in the establishment of the Mongol Yuan Dynasty. The influence of the Church of the East under the Yuan reflected its importance in the Mongol Empire generally. The church disappeared from China for good in the 14th century; it is likely they were ultimately expelled under the Ming Dynasty, who overthrew the Yuan in 1368.

Christianity, known as Jingjiao (景教), or the Luminous Religion, was introduced to China by the Church of the East, centered in Sassanid Persia, during the 7th century. The Nestorian Stele, erected at the Tang capital of Chang'an in 781 and rediscovered in February 1625, describes the introduction of Christianity and the subsequent flourishing of Christian communities throughout China. According to the Stele, the first Nestorian mission was led by the Persian cleric Alopen in 635; this would place it during the reign of Yeshuyab II, Patriarch of the East, an important figure in the history of the church.

The early Christian missionaries met Tang China at the zenith of its cultural, intellectual and administrative attainment. Its people had long lived in an environment of religious syncretism. When Tang forces conquered Turkestan (630) and reopened the ancient trade route to the West, the Persian priest Alopen led a group of Nestorian priests to evangelize this empire.

In 635 he was received by the Chancellor Fang Xuanling, at Chang'an (Hsian-Fu), in line with the emperor's broad policy of toleration and interest in fostering foreign religions. With scholars assigned to assist him, Alopen translated the holy book into Chinese, and in July 638 the emperor graciously issued a proclamation ordering the publication and dissemination of this translation of the Holy Bible. "Let it be preached freely in our empire."[citation needed]

The Sutra of Jesus the Messiah, sought to introduce the Chinese to the Christian faith and specifically pointed out that the gospel contained nothing subversive to China's ancient traditions, loyalty to the state and filial piety being of the essence of the law of Christ.

The following emperor, Gaozong, was pleased to continue emperor Taizong's policy of toleration towards Christianity. He was sufficiently pleased to permit the building of Nestorian Christian churches in every province of China, and to decree Alopen the title of "Great Conservator of Doctrine for the Protector of the Empire" (i.e., metropolitan Chang'an).[citation needed]

Unfazed by the challenge, the Nestorians built and staffed monasteries in China's key cities. They were also quite aggressive in their proclamation of the Christian faith. They persevered in their efforts to phrase the Christian message in the philosophical language of the Confucian court in order to make it intellectually acceptable to the literati.

The Nestorians experienced a series of setbacks as a result of court intrigues among the Confucian bureaucrats, the jealousy of Taoist and Buddhist leaders, and the upheavals of civil war. By their medical knowledge and surgical skill they gave a good name to their faith, but their top-heavy, non-Chinese leadership tended to lead them to be classed with Buddhism and Zoroastrianism as another "foreign religion". Although their monasteries were self-supporting, self-governing, and self-propagating entities, Chinese clergy were only permitted to fill the lower ranks. They depended largely upon its representatives for initiative and leadership.

The vitality of the Nestorian church diminished with the passage of time. The major reason was the frequent disruption of its links to its centers in Mesopotamia. In their isolation, the Nestorian Church in China absorbed more Chinese culture, to the extent that some early 20th century historians thought it had fallen prey to syncretistic tendencies. Anachronistically applying Protestant thought to this ancient Church one historian said:-

Their simplicity of faith and worship, their reverence for scripture, their abhorrence of image and picture worship, of the confessional and of the doctrine of purgatory, and their not adoring the Host in the Communion Supper constitute them the Protestants of Asia.[2]

In 845, during a time of great political and economic unrest, Emperor Wuzong decreed that Buddhism, Christianity, and Zoroastrianism be banned, and their very considerable assets forfeited to the state.

As for the Da-chin (Roman Empire) and Muhu (Zoroastrian) temples, these heretical religions must not alone be left when the buddhists have been suppressed; they must all be compelled to return to lay life and resume their original callings and pay taxes, or if they are foreign they shall be sent back to their native places.

What began in opposition to Buddhist excesses, first among Confucian officials, was continued by a pro-Taoist emperor. Christian monks and nuns were evicted from their monasteries, forced to seek a secular lifestyle, and their properties were confiscated. Books and artifacts were destroyed and leading figures — especially those of foreign extraction, whose continuing role is condemned in the decree — were forced to hide and hold underground services or to flee. Missions from Mesopotamia and Bactria in the eighth, ninth, and tenth centuries, however, strengthened the churches in some provinces, but evidence for their condition or survival throughout Tang provinces is fragmentary.

In 986 a monk reported to the Patriarch of the East:

Christianity is extinct in China; the native Christians have perished in one way or another; the church has been destroyed and there is only one Christian left in the land.[5] 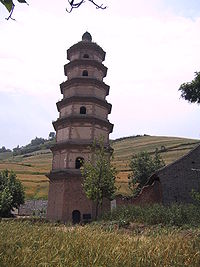 This may or may not have been true. but the Nestorian Church continued to flourish throughout Central Asia well into the fourteenth century among the northern tribes, such as Uyghurs, Turks, and Mongols. However, documents from the closing years of the Nestorians in China suggest that syncretism continued to be a danger against which the church was insufficiently protected.

Under the leadership of the Mongol-established Yuan Dynasty, Nestorian Christianity once again gained a foothold in China. When it was overthrown by the native Chinese Ming Dynasty, foreign influences once again became suspect, and Christians were expelled from China. One of the last known monuments referring to Christianity in China seems to be one dating to c. 1365 and found at Sanpen Mountain (三盆山) outside Chechang village near Zhoukoudian in the Fangshan District of Beijing (see Yunju Temple). The monument relates the story of a Buddhist monk who visited the site of an old Christian monument and had a vision of a luminous cross. A nearby inscription reveals the presence of a Christian monk near the site as late as 1438.[6]

It was also reported that competition with the Roman Catholic Church and Islam were also factors in causing Nestorianism to disappear in China, with "controversies with the emissaries of.... Rome, and the "progress of Mohammedanism, sapped the foundations of their ancient churches."[7] The Roman Catholics also considered the Nestorians as heretical.[8]

Dozens of Jingjiao (Christian) texts have survived. Some of them are translations of biblical scriptures, including the Pentateuch (牟世法王经) - Genesis is known as 浑元经, Psalms (多惠圣王经), the Gospels (阿思翟利容经), Acts of the Apostles (传代经) and the Pauline epistles (宝路法王经).