Gypsy moth
This article is about the insect. For other uses, see Gypsy moth (disambiguation).

The gypsy moth, Lymantria dispar, is a moth in the family Lymantriidae of Eurasian origin. Originally ranging from Europe to Asia, it was introduced to North America in the late 1860s and has been expanding its range ever since. It is also known as the Asian gypsy moth.

Gypsy moth egg masses are typically laid on branches and trunks of trees, but egg masses may be found in any sheltered location, particularly human dwellings, sometimes to the point of even nesting in clothes and footwear. Female gypsy moths in the U.S. are flightless[citation needed], so they lay eggs on the surface where they emerged from their pupa or somewhere they can crawl - thus nearby.

The egg is the overwintering stage. After an acclimation stage, eggs can withstand freezing temperatures. The longer they are chilled in winter, the less heating is required for their hatch in spring.

Egg clusters, usually an oval about 3/4 of an inch long, look like a piece of felt or velour and are buff colored when first laid but may bleach out over the winter months when exposed to direct sunlight and weathering. As the female lays them, she covers them with hair-like setae from her abdomen. Many individuals find these hairs irritating, and they may offer the eggs some protection. Egg clusters contain from a couple of hundred to about 1,200 eggs, although some batches may be as small as 50 eggs. 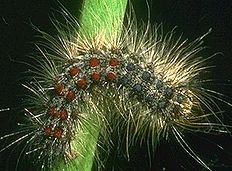 The hatching of gypsy moth eggs coincides with budding of most hardwood trees. Larvae (caterpillars) emerge from egg masses from early spring through mid-May.

Gypsy moths are dispersed in two ways. Natural dispersal occurs when newly hatched larvae hanging from host trees on silken threads are carried by the wind for a distance of up to about 1 mile[citation needed], although most go less than 50 meters. Eggs can be carried for longer distances. Artificial dispersal occurs when people transport gypsy moth eggs thousands of miles from infested areas on cars and recreational vehicles, firewood, household goods, and other personal possessions. Females are flightless in most varieties, so these are the only means of spreading. 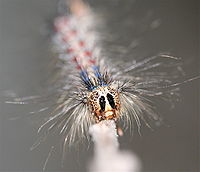 Larvae develop into adults by going through a series of progressive moults through which they increase in size. Instars are the stages between each molt. Male larvae normally go through five instars (and females, six) before entering the pupal stage. Newly hatched larvae are black with long hair-like setae. Older larvae have five pairs of raised blue spots and six pairs of raised brick-red spots along their backs, and a sprinkling of setae.

During the first three instars, larvae remain in the middle of trees or crowns of host trees. The first stage or instar chews small holes in the leaves. The second and third instars feed from the outer edge of the leaf toward the center.

When population numbers are sparse, the movement of the larvae up and down the tree coincides with light intensity. Larvae in the fourth instar feed in the top branches or crown at night. When the sun comes up, larvae crawl down the trunk of the tree to rest during daylight hours. Larvae hide under flaps of bark, in crevices, or under branches - any place that provides protection. When larvae hide underneath leaf litter, mice, shrews, and Calosoma beetles can prey on them. At dusk, when the sun sets, larvae climb back up to the top branches of the host tree to feed. When population numbers are dense, however, larvae feed continuously day and night until the foliage of the host tree is stripped. Then they crawl in search of new sources of food.

The larvae reach maturity between mid-June and early July. They enter the pupal stage. This is the stage during which larvae change into adults or moths. Pupation lasts from 7 to 14 days. When the population is spread out and running low, pupation can take place under flaps of bark, in crevices, under branches, on the ground, and in other places where larvae rested. During periods when population numbers are dense, pupation is not restricted to locations where larvae rested. Pupation will take place in sheltered and non-sheltered locations, even exposed on the trunks of trees or on foliage of nonhost trees. Usually the caterpillars create flimsy cocoons made of silk strands holding the leaf together, while others do not cover their pupae in cocoons, but rather hang from a twig or tree bark, like butterfly pupae do. 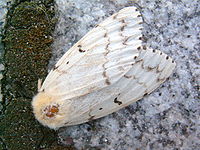 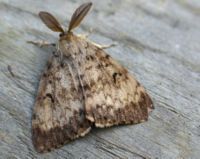 The brown male gypsy moth emerges first, flying in rapid zigzag patterns searching for females. The male gypsy moths are active throughout night and sometimes even daytime as well, unlike most moths, which are only nocturnal. When heavy, black-and-white egg-laden females emerge, they emit a pheromone that attracts the males. After mating, the female lays her eggs in July and August close to the spot where she pupated. Then, both adult gypsy moths die. The European and most Russian forms of the gypsy moth have flightless females. Although they have large wings, the musculature is not developed. However, the Japanese gypsy moth females do fly and are attracted to lights.

Gypsy moths (at least of the introduced American population) fly all day and night, with the possible exception of the late morning. They are most active soon after dusk and in the latter hours of the night (Fullard & Napoleone 2001).

Gypsy moth eggs are often found on inbound freight in New Zealand and a live moth was found in 2003. A spraying programme was carried out which eradicated the moth. 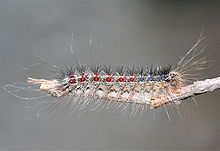 The gypsy moth was introduced into the United States in 1868 by a French scientist, Leopold Trouvelot, living in Medford, Massachusetts. The native silk spinning caterpillars were proving to be susceptible to disease so Trouvelot brought over gypsy moth eggs to try to make a caterpillar hybrid, that could resist diseases. When some of the moths escaped from his lab, they found suitable habitat and started to multiply. The gypsy moth is now one of the most destructive pests of hardwood trees in the eastern United States; it and other foliage-eating pests cause an estimated $868 million in annual damages in the U.S.[1]