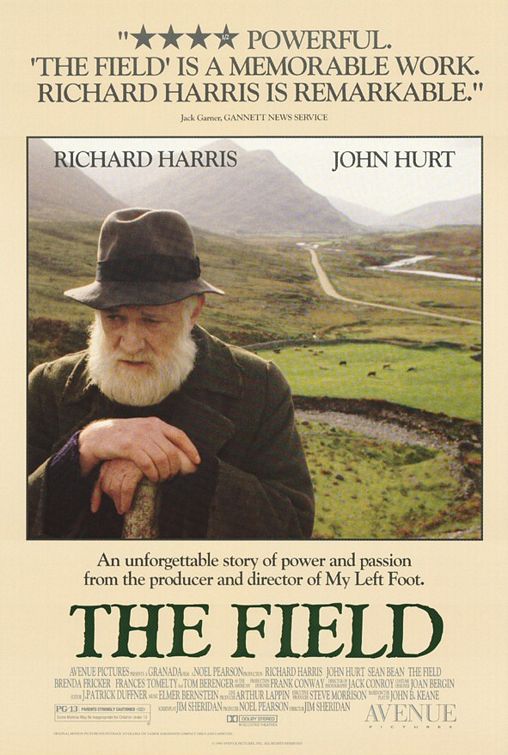 "The Field" is a play written by , first performed in 1965. It was adapted into a film in 1990 by . It tells the story of the hardened farmer "Bull" McCabe and his love for the land he rents. The play debuted at 's Olympia Theatre in 1965, with as "The Bull" and as the "The Bird" O'Donnell. The play was published in 1967 by Mercier Press. A new version with some changes was produced in 1987.

"The Field" is set in a small country village in southwest Ireland. Bull McCabe has spent many hard years of labor turning the rocky land he rents from the widow Maggie Butler into a field suitable for grazing cattle. He has always considered the land his own, and dreams of buying it; Butler decides to sell the land at public auction. The McCabes intimidate most of the townspeople out of bidding in the auction, to the chagrin of auctioneer Mick Flanagan, but Galway man William Dee arrives from England, where he has lived for many years, with his own plans for the field. An encounter between Dee and the McCabes ends in bloodshed and a coverup. Other characters include the town priest Father Murphy, Flanagan's wife and son, and the loyal town drunk "Bird" O'Donnell.

Keane based the story on the 1959 murder of Moss Moore, a bachelor farmer living in Reamore, . Dan Foley, a neighbour with whom Moore had a long-running dipute, was suspected of the murder, but the charges were denied by Foley's family.

Jim Sheridan's 1990 film version starred as Bull McCabe, as Bull's son Tadgh, as Bull's wife Maggie, and as Bird O'Donnell. Adaptations included changes to the cast; the town priest received an expanded role as Father Chris Doran, played by , and English resident William Dee is replaced by the sympathetic Peter, played by . The auctioneer's role is considerably reduced, while new additions include a family of , despised by Bull McCabe for having lost their connection to the land. The ending was also changed for the film. "The Field" was released to generally mild or poor reviews, [ [http://www.rottentomatoes.com/m/field/?critic=columns Rottentomatoes.com] .] but Harris received an nomination for his role. In 1996 the , the Irish Post Office, issued a set of to commemorate the centenary of Irish cinema; the 32p stamp featured an image from "The Field" of actors Harris, Bean, and Hurt standing against the backdrop of . [ [http://www.europeanstamps.net/imagedb2/details.asp?id=10008 Detail of the 32p stamp] . From europeanstamps.net. Retrieved , .]