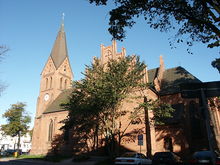 Church from the south

The Church Warnemünde is a neogothic building in Warnemünde, which is a part of the hanseatic city of Rostock. 1866 began the construction of the current brick building in Warnemünde and in 1871 the church was ordained. The church of Warnemünde stands for over one hundred years in the middle of the town and is the center of the Evangelical Lutheran congregation. For the community along with many guests it is a place of rest and prayer. But it has also even given protection from flooding. The maritime atmosphere is shown by the special votiveships inside. 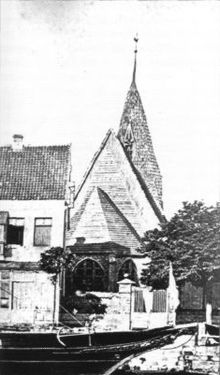 The old church, which burned down twice, stood on the riverside of the Warnow for approximate 600 years and was demolished in 1872. The construction of the new church began in 1866 on the western side of the old fisherman`s village and in 1871 the church was ready for service. The new building, designed by master builder Krueger Schwerin and built by master builder Wachenhusen (Rostock) erected on the western outskirts stands today at the center of the town. The church therefore is in fact relatively young, but with major furnishings decorated, which were taken over from the previous building. Originally three narrow lancet windows were planned for the transept facades. But the principal Frederick Francis II, Grand Duke of Mecklenburg, patron of the Warnemünde church insisted, a single large window would be much more appropriate. Because of "His Highness" suggestion the architects designed the rose windows, which even today enjoy the viewer. 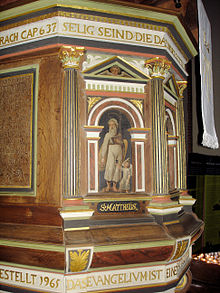 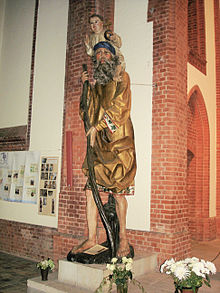 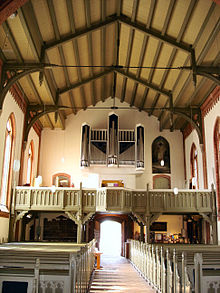 Middleship with organ on the westwall

The Gothic carved altar from around 1475, rumors say it was an haul from a shipwreck, is the work of an unknown master of Gdansk. In 2010 it was restored. In the central shrine the figures are next to and behind each other in a peculiar way, without being connected by a common action as usual in that time. A pillar in the middle divides them into two groups. In the front row on the left the Saviour blessing, St. George, St. Nicholas (probably) and John the Baptist can be seen. Behind it St. Mauritius as a Moor, St. Gregory as pope and a bishop (perhaps the St. Erasmus). In the front row on the right there are Mary, the mother of Jesus, Mary Magdalene with ointment can (or is it the St. Barbara with her tower ?), St. Catherine with the wheel and sword and St. Dorothea with roses and the cup. Behind them are seen three crowned female saints, of which only the St. Agnes with the lamb can be determined. In the right wing one can see five Acts: of which Paul and James the Elder are pilgrims, Judas Thaddeus with club and two female saints, including St. Elizabeth recognizable on the pitcher and the plate. Below is a deacon, probably the St. Lawrence. In the left wing are the other seven apostles and St. Stephen with three stones in the arm. Of the apostles only the four top can be determined: Peter, Andrew, John and Bartholomew. On the predella above the table are in the middle: Christ crowned with thorns, right the St. Elisabeth and Maria Magdalena, left St. Agnes and St. Barbara with a chalice. The crucifix in front of the altarpiece is the oldest art work of the Church. It is created in the first third of the 15th Century and was already at the same space in the old fishermen's church.

The renaissance pulpit was build in 1591 by the local wood carver Hans Wegner. After the demolition of the old church in 1872 the pulpit was given to the Rostock Museum, restored and completed in 1965 and again implemented in the church.

From around the same time as the altar is the statue of Saint Christopher (Greek: christos pherein, "Christ bearer") with the Christ child on his shoulder. This portrait was traditionally adored with special affection by the Warnemünder: This saint found his life's mission in helping people overcoming waters, an activity that was also a business of the local fishermen. The figure is made of oak wood and 3.72 meters high. In the old church it had its place on the northern wall of the choir, under the Arc de Triomphe. In 2007 the statue was restored. The name of this saint is often seen in public life: For example, the rescue helicopters in Germany, have the radio call Christopher. The Warnemünde church mouse is named Christopher and knows as a "mouse" how to teach the children pieces of information in the community newsletter.

It was built in 1975 by the Voigt Company from Bad Liebenwerda. The modern prospectus with the crystal form of the organ case was fitted into the neo-Gothic church. It has 1587 organ pipes and 22 stops, which are distributed over two manuals and pedal. At the general overhaul in 1995, the existing pneumatic stop control (with two combinations) was upgraded. Now the organ features a mechanical stop action connected to a electronic translator that has 512 combinations, divided into eight levels with eight main groups in eight combinations each and four Presets. The tremulants are electronically controlled and variable in frequency from out of the console.

The table positive organ in the sanctuary was built in 2002, also by the organ builder Voigt. A special feature of this small organ are the wooden pipes, of which the smallest is 4 cm long. Instead of standing, all pipes are laying in the instrument Besides she is transposable a semitone up and down and can be regulated between it in the pitch due to wind pressure change.

Clockwork from the old church of Warnemünde

Since May 2007 a 300-year-old clockwork stands in the north wing of our church. It dates from the previous building, which was demolished in 1872. In the meantime, it was in the storage of the Cultural History Museum Rostock. Three years ago it was discovered there by an expert and identified as that, displayed inside the church on the gallery, showing the time in a special way because there was no hour hand. The sky blue dial and the hands are missing. This type of clockwork was invented in England. Today there is only one similar copy in Dover. 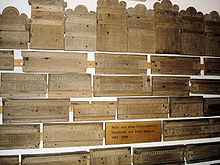 The objects preserved from the old church of Warnemünde include the house marks of the locals, carved once into the pews. About 60 pieces of wood, collected by a working group and then combined into a display on the wall righthand from the entrance. The house marks are to visit for free in today's church.

Visitors to the church of Warnemünde are struck by two items that are not found in many churches. In the aisles are seen two votive ships that the parish have been given by the Warnemünde harbor pilots David and Jantzen . Votive ships can be found in some churches of northern German towns (also in Ahrenshoop, Dierhagen, Wismar and Wolgast). They are a votive offering often given to the churches in gratitude for the preservation and protection on the high seas . In the south part of the transept hangs the barque "Marie" built in 1887 by Captain Henry Stuhr and in the north part the "Schnau", a brig from the 18th century, which was made in 1825 by maritime pilot Jungmann. On the sail of the "Schnau" is the inscription " Now I have found the seabed where my anchor holds forever." This known Choralvers was written in 1726 by the Moravian pastor Johann Andreas Rothe. The song refers to a ground which is fixed and unchangeable, which is also true when "earth and heaven goes down ." Who has founded on him, anchored on a solid foundation of strength that is independent of the changes in history and the lives of people. This stable, steady basis is the divine gospel of our Lord Jesus Christ. Who uses it has, in quiet and stormy days, at home and on rough Sea a foothold, that man in life and death can trust .

Partially hidden in the grass in front of the east chancel of the church is a 2.65 x 1.70 meters large stone slab, which probably was in the 19th. Century on the sidewalk to the parsonage. It represents the most ancient stone made by human in Warnemünde and is a cultural heritage worth preserving. Recognizable on it are traces of the working process that clearly identify them as grave stone. Presumably, the stone slab was used the first time for the burial in the 14. Century, but the oldest inscriptions were chiselled off, because the plate was used again. As originally made symbols are still visible the four evangelists symbols in every corner: Top left, a bull (Luke), top right, a lion (Mark), bottom left, an eagle (John) and bottom right, an angel (Matthew). This typical medieval design was preserved as an apparently high-ranking lord was buried in the former church, which is still recognizable by the letters "Anno Domini [...] obiit dominus [...]" (died in the year ... Lord ...). This slab has experienced four other overhauls before it was no longer used because burials in the churches for reasons of hygiene in the middle of the 19th Century were abandoned. Now it will be tried to preserve the plate and the few recognizable elements to it. It would first have to be erected to prevent the collection of rainwater. This is as a future project of the Booster club of the Church already scheduled.