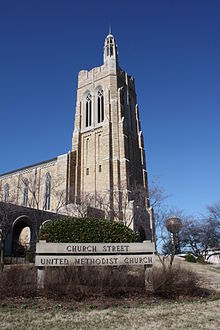 Church Street United Methodist Church is located at 913 Henley Street in Knoxville, Tennessee, although the church publishes its address as "900 Henley at Main." Oddly, the location is removed from Church Street; after the original building burned in 1929, the congregation chose to relocate several blocks away, but the name remained "Church Street Methodist Episcopal Church South" despite the move.

The 1930 church was designed by the associated architects Charles I. Barber of the Knoxville firm Barber & McMurry, and the New York office of John Russell Pope Architects. It is designed in the Gothic Revival style of architecture, emulating the early Gothic of Durham Cathedral and Castle.

On Labor Day 1940, with his campaign for a third term beginning, President Franklin D. Roosevelt was driven past the church en route to Newfound Gap to dedicate the Great Smoky Mountains National Park. He reportedly inquired about the church and remarked, "That is the most beautiful church I have ever seen."[1]

The congregation is affiliated with the United Methodist Church.