Kim Ok-gyun
This is a Korean name; the family name is Kim.

Kim Ok-gyun [김옥균; 金玉均] (1851-1894) was a reformist (Gaehwapa, 개화파) activist during the Joseon Dynasty of Korea. He served under the national civil service under King Gojong, and actively participated to advance Western ideas and sciences in Korea. The goal of the reform movement was to develop Korea in government, technology, and military by using Japanese resources, so that Korea would become stable enough in time to withstand increasing Japanese Imperialism. Kim was assassinated in Shanghai, and later was given the posthumous title "Chungdal".

Kim was born to Kim Byung-tae and his wife on 1851 in Chungcheongnam-do. His family was poor, and, by the age of four, they moved to Cheonan. His father opened a Seodang, or Korean verbal school, at which Kim was educated. When he was six, he was adopted by Kim Byung-gye, who had lost his son and was desperate to secure the continuation of his family lineage.

For four years, Kim stayed at in what is today Seoul and, when Kim Byung-gye was named the governor in Gangneung state in spring of 1861, they moved once again. When Kim reached the age of fifteen, Kim Byunggye was named "Beopmubu Chagwan" in the judicial office, and his family returned to Seoul. There, Kim learned and competed with sons of other aristocratic families. He displayed his talents in playing the Kayakem, singing and dancing, poetry, calligraphy, and art. His fame and talents eventually reached the imperial palace, and "Daebi", or the mother of the king, invited him.

At the age of 22, Kim took the national civil service exam, and was ranked "Jang-won Geub-jae" (level 6), which was an amazing accomplishment. (Usually it took about ten years to achieve this status). To avoid the possible negative impacts of the internal political conflicts that could result on his adopted son, Kim Byunggye retired from his holding. 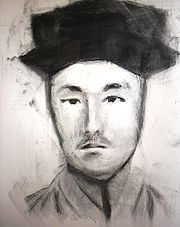 At the time, Heungseon Daewongun, who had implemented policies to avoid contacts with the West then for ten years, lost political power. Although trade with the West began and foreign policies were adopted, the situation worsened, and Kim meddled in the internal conflicts in the palace.

Kim was for more open policies to the West so that Korea might adopt Western ideals, knowledge, and technology thereby securing its existence. During his national civil service, Kim found many others who agreed with him, and they formed the Dongnipdang, or "Independence Party."

Among their various contacts, the group met a Buddhist monk at Bongwonsa, who showed them a peculiar European device. It was a projector that displayed different photographs of the West, such as the streets of London and a Portuguese soldier. He also showed a Japanese book that contained scenes of foreign nations. The activists asked the monk to obtain more Western artifacts for them. The monk spent two months journeying to and from Japan bringing more Western products. These had to be kept hidden due to the policies of the time.

After the conflict with the Japanese navy and implementation of the Treaty of Ganghwa, which Kim was against, Kim realized that Japan, once thought to be a barbaric nation, had westernized and become a much stronger country. Therefore, Kim wished to visit Japan to learn how the Japanese had westernized. In November 1881, Kim was granted permission to visit Japan under the mission of finding out whether Japan was planning to invade Korea. After arriving in Tokyo, he met with various influential Japanese politicians during his stay. He concluded that for now Japan would not invade Korea because its military strength was not comparable to Qing China. Kim felt that in order to ensure survival when China was in decline, Korea would have to borrow Japanese help to modernize itself.

In July 1882, Korea made another ultimately disadvantageous pact with Japan, in which Korea was to pay for hosting the Japanese embassy and which allowed the Japanese army to stay in Korea to protect the embassy. Kim saw that the only solution to the situation was to introduce a new political force to wipe out the present dominant party. In August of the same year, permission to visit Japan as a part of a diplomatic expedition seemed to bring Kim closer to realizing that dream.

After completing diplomatic missions, Kim stayed in Japan purportedly to find out Japan's true intentions towards Korea. His real purpose, however, was to gather resources for future Gaehwapa activist campaigns.

During his stay in Japan, he sought assistance, and Japanese statesman Inoue Kaoru promised him 3,000,000 Won (Korean currency) if granted permission from the Korean Emperor Gojong. Unfortunately, conflicts with a German ambassador and a change in Japanese policy on Korea caused Inoue to break his promise. Kim returned home in March 1884 without having attained his goal.

The Gaehwapa activists continued to meet at Kim's private house and discuss the ongoing events concerning East Asia and the international politics. In a feast offered by Kim for the members of the Min Yeong-ik political faction, several Japanese government officials were present, including Inoue and several of the Gaehwapa activists. Under the uncomfortable atmosphere, the discussions soon led to the Sino-French War. The Min Yeong-ik faction fiercely supported Qing China (which they felt would ensure the survival of Korea), and Japan fiercely supported France (which they felt would allow Japan to overtake Korea). The meeting broke up as Kim and others tried to stop the heated exchanges of debate. From this meeting, Kim could clearly predict that Japan would try to take advantage of the Sino-French War by extending its influence on Korea.

Clandestinely, Kim visited the Japanese embassy after the feast. During a discussion with Simamura, Kim questioned Japan's stance for the Gaehwapa and complained about the incident with Inoue. Simamura explained that the Japanese still support the movement, and that the internal conflicts and misunderstandings contributed to the ill relationship for Kim with Inoue. He added that the Sino-French War was a great chance for spurring another movement, to which the Japanese government would definitely respond to.

In a meeting of the Gaehwapa activists and Japanese supporters, Kim outlined a plan for the revolution. It consisted of the assassinations of certain political figures, and creating a major chaos on the day of the reception for the founding of "Ujeongchongguk (우정총국, 郵征總局)", or Office for International Postal Service. They would select potential enemies as scapegoats to whom the blame would rest. The Japanese embassy strongly pledged their active military support to this plan.

On the night of December 4th 1884, near the post office opening reception, a fire occurred. While the activists created chaos with explosives and gunshots, the assassins proceeded in their murders. Over the night, the Gaehwapa became the prevailing party in the government. This event is known as the Gapsin Coup. 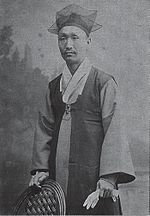 The truths behind the Gapsin Coup incident were leaked to the queen, and the plans of the Gaehwapa threatened her political rights. Therefore, the queen secretly requested the Chinese military for their presence. The Korean and Japanese soldiers fought against the outnumbering Chinese army, but were forced to retreat. With the predominance of the Chinese army, the Gaehwapa activists lost power to the Sadaedang, and their lives were threatened. The Gaehwapa activists headed toward the city port of Jemulpo (Incheon) under the escort of the Japanese ambassador Takejo, and boarded a Japanese ship, Sensei. When there was a request to the Japanese ambassador Takejo to hand over the activists, he yielded; the Japanese captain Sujikas scolded Takejo and prohibited their release. Because Korean name would be unfit for living in Japan, the captain gave Kim a new name, Itawa Sujaku. Later, other activists fled to the US, and Kim Okgyun led a life of mistreatment under the watch of the Japanese government. During his stay, he earned much respect from the Japanese young adults and gained adherents, such as Wada.

There had been many failed attempts to assassinate Kim. When Li Hongzhang (李鴻章) sent Kim letters of invitation to meet with him, Kim could not refuse. Before departing Kim gave his personal diaries to Koyama, one of his close Japanese friends, in case something should happen to him. Kim then boarded the Japanese ship Seike with Wada, and headed to Shanghai. During this journey Kim Okgyun was assassinated by Hong Jong-u.