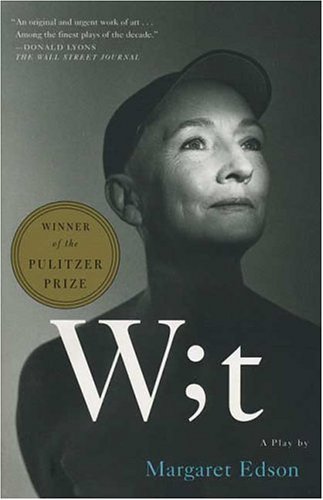 "Wit" is a play by the American and playwright , her first play. Edson used her work experience in a hospital as part of the inspiration for her play.

"Note": On the cover of the published book of the play, the use of a semicolon in place of the letter i gives "W;t" as one representation of the play's title. In the context of the play, the semicolon also refers to the recurring theme of the use of a semicolon versus a comma in one Donne sonnet. Both "Wit" and "W;t" have been used in various articles on the play for the title. For convenience, the title of this article here is given as the conventional spelling of "Wit", without the use of punctuation in the middle of the word.

"Wit" is performed as a single continuous act, without intermission.

The play is structured as the last hours of Dr Vivian Bearing, a of English, who is dying of . She recalls the initial diagnosis of Stage IV metastatic ovarian cancer from her , Dr Harvey Kelekian. Dr Kelekian then proposes an experimental chemotherapeutic treatment regimen consisting of eight rounds at full dosage. Vivian agrees to the treatment.

Over the course of the play, Bearing assesses her own life through the intricacies of the , especially the use of and the of . Throughout the play, Vivian recites John Donne's whilst reflecting upon her condition. In addition to her understanding of poetry, she has a reputation for her difficult classes and demanding manner. Vivian has spent most of her life preferring scholarship to humanity. She is unmarried and without children, her parents are deceased, and she has no third-party person to contact.

Vivian recalls undergoing tests by various medical technicians and being the subject of . She remembers the first time that she acquired a love of books from her father, Mr Bearing. She also flashes back to her experiences as a student of Dr EM Ashford, an expert on John Donne.

Bearing later finds herself under the care of Dr Jason Posner, a young doctor who took her Donne class at university. At the hospital, Vivian recognises that doctors are more interested in her for their research, and recognises a parallel to her approach in study and teaching. She gradually realises that she would much prefer kindness and compassion to intellect. Susie Monahan, a nurse at the medical centre, offers Vivian comfort, and mentions to her the option of exercising among medical emergency options either code blue or "" (DNR), in case of a severe decline in her condition. Vivian decides to mark the DNR option.

Eventually, Vivian reaches the end stage in extreme pain. Dr Ashford, in town for her great-grandson's birthday, visits the hospital after learning of Vivian's cancer. She comforts Vivian and offers to read to her the Donne sonnet, but Vivian refuses. Instead, Dr Ashford reads from 's "", which she had bought for her great-grandson. Dr Ashford turns out to be the only visitor that Vivian receives. Vivian then . Dr Posner suddenly discovers this, tries to resuscitate Vivian, and calls in a medical team to administer CPR to her. Nurse Monahan tries to stop him and to point out the DNR instruction. Dr Posner eventually realises the DNR directive, and calls for the CPR team to stop, at which the team remarks on Dr Posner's mistake in not noticing the order. The play ends as Vivian, unclothed after her death, walks from her hospital bed "toward a little light".