Female Transformers are extraterrestrial robots in the Transformers universe that possess the outward appearance of humanoid females.

They were seen in the 1985 animated television series, in which they were indicated to be rare, and believed extinct by most other Transformers. They did not appear in the American Marvel comic book series, where it was specifically stated (although later retracted) that Transformers do not have genders.

It is very clear that the difference between male and female Transformers is much more than the shape of their bodies, it is a sociocultural difference, with each "gender" possessing—in a general sense—the traits usually associated, at least partially stereotypically, with the human genders. Furthermore, the two genders feel attraction to one another, to the extent that romantic relationships exist between certain members. The nature of such relationships is not elaborated.

In the Marvel UK comics, there are no female Transformers until a human feminist accused the Autobots, who are treated as males, of being sexist. The Autobots initially argue that sexism is impossible for their genderless race, but they build Arcee to prove they are not sexist. Though Prime later decides that it was a mistake to build her just to prove they aren't sexist, he recognizes Arcee as a valuable Autobot.

There is no precise, officially-given, in-story explanation for why females, or even males, should exist. In the animated series, the Transformers were manufactured by the Quintessons for commercial sale.

Female Cybertronians are particularly rare, and in the four million years that Optimus Prime and his crew were absent from Cybertron, they were thought to have become extinct. However, a small band of the warriors, led by Elita One, waged a guerrilla war against Shockwave, secretly stealing Energon without his knowledge. They were discovered in the Earth year 1985.

Elita One, Chromia, Firestar and Moonracer appeared briefly in the final issue of Dreamwave Comics Generation One series among the female Transformers sent by the Quintessons to Cybertron. Although they were supposed to participate in the next plot arc, involving the return of Optimus Prime, the company's closure left this story unfinished.

Alana as an Autobot

It should be noted the name Alana comes from the Gaelic/Hawaiian community meaning "fair, beautiful, offering". Also in polynesian Alana means "new beginning"

Female Transformers appeared in the Beast Wars series with Airazor and Blackarachnia being main characters in the animated series. 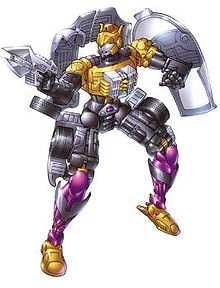