Chromebooks are shipped with the Google Chrome OS operating system, which uses the Linux kernel, and the Google Chrome web browser with an integrated media player.[5][6] With limited offline capability and a boot time, according to Google, of eight seconds, Chromebooks are primarily designed to be used while connected to the Internet.[7] Instead of installing traditional applications, users add web apps from the Chrome Web Store, such as word processing and instant messaging.[8] Google claims that a multi-layer security architecture eliminates the need for anti-virus software.[4]

Support for many USB devices such as cameras, mice, external keyboards and flash drives will be included, utilizing a feature similar to plug-and-play on other operating systems. Like the prototype Cr-48, Chromebooks will have a specialized keyboard complete with buttons for opening and controlling multiple browser windows, as well as a Web search button which replaces the caps lock key.[9]

An analysis of the Samsung Series 5 components by iFixit in June 2011 estimated that the unit cost about US$322 in materials and US$12 in labor costs. With a retail price of US$499.99 and shipping, marketing, research and development and retail margins to account for this indicates that the profit margins on the Chromebooks are quite thin, requiring a large production run to make a profit.[10]

Since late 2010, Google's Chomebooks initiative has been headed by Rajen Sheth, best known as the “father of Google Apps”. Sheth's background includes corporate marketing at VMWare, where he worked on a data center product. His strategy for marketing Chromebooks has centered on the total cost of ownership, which, he said, can be "dramatically" reduced by lower maintenance, management and security costs, even if hardware costs remain unchanged.[20]

Chromebooks began selling through online channels, including Amazon and Best Buy in the U.S., and in some European countries starting June 15, 2011. The first machines sold for between $349 and $499, depending on model and whether 3G was included.[21] Google also offered a monthly payment scheme for business and education customers at $28 and $20 per user, per month, respectively for a three-year contract, including replacements and upgrades. Verizon offered 100 megabytes of wireless data per month, with an additional gigabyte at $20 per month.[7]

At the end of September 2011, Google launched the Chrome Zone, a "store within a store", inside the Currys and PC World superstore in London.[25] The store has a Google-style look and feel with splashes of color all around the retail store front.[26] Google states that it plans to open up more Chrome Zones in the UK over the next few months.[27] 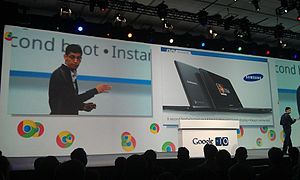 Google's Sundar Pichai speaking about the Chromebook at its launch at Google I/O, May 2011.

Some analysts viewed Google's web-centric operating system packaged with hardware as a direct attack on the market dominance of Microsoft.[1][2][28] But others questioned the market timing: companies moving to tablets, rather than netbooks, and purchasing Apple products as an alternative to Windows, as well as market fragmentation from competition with Google's own Android devices.[3][29] Other observers noted that the success of the platform depends on the quality of available Web applications, access to Windows applications on virtual desktops,[30] and the ability of some applications to function offline.[31][32]

Reviewing the Samsung Series 5 specifications, Scott Stein of CNET was unimpressed with the "Atom-based 12-incher with only 16 GB of onboard storage. Chrome OS might be lighter than Windows XP, but we'd still prefer more media storage space. At this price, you could also get a 11.6-inch (290 mm) Wi-Fi AMD E-350-powered ultraportable running Windows 7."[16] On the other hand, MG Siegler of TechCrunch wrote a largely favorable review, praising the improvements in speed and trackpad sensitivity over the CR-48 prototype, as well as the long battery life and the fact that all models are priced below the iPad.[2]

In June 2011 iFixit dismantled a Samsung Series 5 and concluded that it was essentially an improved Cr-48. They rated it as 6/10 for repairability, predominantly because the case has to be opened to change the battery and because the RAM chip is soldered to the motherboard. iFixit noted that the "mostly-plastic construction" felt "a little cheap". On the plus side they stated that the screen was easy to remove and most of the components, including the solid state drive would be easy to replace. iFixit's Kyle Wiens concluded: "Our analysis revealed that the Series 5 is a well-polished version of the rather imperfect Cr-48 prototype Chromebook. The Series 5 fixes the major shortfalls of the Cr-48 and adds the polish necessary to strike lust into the heart of a broad consumer base: sleek looks, 8+ hours of battery life, and optimized performance."[33]

In an article published on ZDNet in June 2011, entitled Five Chromebook concerns for businesses, Steven J. Vaughan-Nichols faulted the devices for lack of virtual private network capability, not supporting some Wi-Fi security methods, in particular Wi-Fi Protected Access II (WPA2) Enterprise with Extensible Authentication Protocol-Transport Layer Security (EAP-TLS) or Cisco’s Lightweight Extensible Authentication Protocol (LEAP). He also noted that its file manager does not work, the need to use the undocumented crosh shell to accomplish basic tasks such as setting up a secure shell (SSH) network connection as well as serious deficiencies in documentation.[34]

In one of the first customer reviews, the City of Orlando reported on their initial testing of 600 Chromebooks as part of a broader study related to accessing virtual desktops. Early indications show potential value in reducing IT support costs. End users have indicated that the Chromebook is easy to travel with and starts up quickly. One stated that "If I just need to stay connected for emergencies, I take my Chrome," but when traveling for business she would still take her laptop. Orlando does plan to continue to use the Chromebooks.[35]

Reviewing the Samsung Series 5 Chromebook in July 2011, Benjamin Humphrey of OMG! Ubuntu! concluded: "Overall, the Samsung Series 5 is a lovely piece of hardware and a perfect start to the Chromebook lineup...However, the Series 5 as an overall product is let down by comparatively feature-poor software. While you shouldn’t expect a Chromebook to be a full replacement for a complete operating system, it should be able to handle basic things such as copy and paste in the File Manager and playback of common local formats. Thankfully, Chrome OS has a very quick release cycle of 6 weeks, and many of my gripes have been addressed and are targeted to the next couple of updates, so it can only get better...unless you’re a keen early adopter, I’d suggest holding out until later in the year before purchasing a Chromebook to let the software mature a bit more. If you’re simply after a tablet with a keyboard however, the Series 5 might just be the perfect purchase."[36]

In June 2010, ISYS Technologies, based in Salt Lake City, sued Google in a Utah district court, claiming rights to the name "Chromium", and, by default, Chromebook and Chromebox. The suit sought to stop Google and its hardware and marketing partners from selling Chromebooks.[37] The suit was later dismissed, and, as part of an undisclosed settlement, ISYS abandoned its trademark efforts.[38]