Size-exclusion chromatography (SEC) is a chromatographic method in which molecules in solution are separated by their size, and in some cases molecular weight[1] . It is usually applied to large molecules or macromolecular complexes such as proteins and industrial polymers. Typically, when an aqueous solution is used to transport the sample through the column, the technique is known as gel-filtration chromatography, versus the name Gel permeation chromatography, which is used when an organic solvent is used as a mobile phase. SEC is a widely used polymer characterization method because of its ability to provide good molar mass distribution (Mw) results for polymers.

The main application of gel-filtration chromatography is the fractionation of proteins and other water-soluble polymers, while gel permeation chromatography is used to analyze the molecular weight distribution of organic-soluble polymers. Either technique should not be confused with gel electrophoresis, where an electric field is used to "pull" or "push" molecules through the gel depending on their electrical charges.

SEC is a widely used technique for the purification and analysis of synthetic and biological polymers, such as proteins, polysaccharides and nucleic acids. Biologists and biochemists typically use a gel medium — usually polyacrylamide, dextran or agarose — and filter under low pressure. Polymer chemists typically use either a silica or crosslinked polystyrene medium under a higher pressure. These media are known as the stationary phase.

The advantages of this method include good separation of large molecules from the small molecules with a minimal volume of eluate,[2] and that various solutions can be applied without interfering with the filtration process, all while preserving the biological activity of the particles to be separated. The technique is generally combined with others that further separate molecules by other characteristics, such as acidity, basicity, charge, and affinity for certain compounds. With size exclusion chromatography, there are short and well-defined separation times and narrow bands, which lead to good sensitivity. There is also no sample loss because solutes do not interact with the stationary phase. Disadvantages are, for example, that only a limited number of bands can be accommodated because the time scale of the chromatogram is short, and, in general, there has to be a 10% difference in molecular mass to have a good resolution[3]

The technique was invented by Grant Henry Lathe and Colin R Ruthven, working at Queen Charlotte’s Hospital, London.[4][5] They later received the John Scott Award for this invention.[6] While Lathe and Ruthven used starch gels as the matrix, Jerker Porath and Per Flodin later introduced dextran gels;[7] other gels with size fractionation properties include agarose and polyacrylamide. A short review of these developments has appeared.[8]

There were also attempts to fractionate synthetic high polymers; however, it was not until 1964, when J. C. Moore of the Dow Chemical Company published his work on the preparation of Gel Permeation Chromatography (GPC) columns based on cross-linked polystyrene with controlled pore size,[9] that a rapid increase of research activity in this field began. It was recognized almost immediately that with proper calibration, GPC was capable to provide molar mass and molar mass distribution information for synthetic polymers. Because the latter information was difficult to obtain by other methods, GPC came rapidly into extensive use.[10]

One requirement for SEC is that the analyte does not interact with the surface of the stationary phases. Differences in elution time are based solely on the volume the analyte "sees". Thus, a small molecule that can penetrate every corner of the pore system of the stationary phase "sees" the entire pore volume and the interparticle volume, and will elute late (when the pore- and interparticle volume has passed through the column ~80% of the column volume). On the other extreme, a very large molecule that cannot penetrate the pore system "sees" only the interparticle volume (~35% of the column volume) and will elute earlier when this volume of mobile phase has passed through the column. The underlying principle of SEC is that particles of different sizes will elute (filter) through a stationary phase at different rates. This results in the separation of a solution of particles based on size. Provided that all the particles are loaded simultaneously or near-simultaneously, particles of the same size should elute together.

However, as there are various measure of the size of a macromolecule (for instance, the radius of gyration and the hydrodynamic radius), a fundamental problem in the theory of SEC has been the choice of a proper molecular size parameter by which molecules of different kinds are separated. Experimentally, Benoit and co-workers found an excellent correlation between elution volume and a dynamically based molecular size, the hydrodynamic volume, for several different chain architecture and chemical compositions.[11] The observed correlation based on the hydrodynamic volume became accepted as the basis of universal SEC calibration.

Still, the use of the hydrodynamic volume, a size based on dynamical properties, in the interpretation of SEC data is not fully understood.[12] This is because SEC is typically run under low flow rate conditions where hydrodynamic factor should have little effect on the separation. In fact, both theory and computer simulations assume a thermodynamic separation principle: the separation process is determined by the equilibrium distribution (partitioning) of solute macromolecules between two phases --- a dilute bulk solution phase located at the interstitial space and confined solution phases within the pores of column packing material. Based on this theory, it has been shown that the relevant size parameter to the partitioning of polymers in pores is the mean span dimension (mean maximal projection onto a line).[13] Although this issue has not been fully resolved, it is likely that the mean span dimension and the hydrodynamic volume are strongly correlated.

This is usually achieved with an apparatus called a column, which consists of a hollow tube tightly packed with extremely small porous polymer beads designed to have pores of different sizes. These pores may be depressions on the surface or channels through the bead. As the solution travels down the column some particles enter into the pores. Larger particles cannot enter into as many pores. The larger the particles, the faster the elution.

The filtered solution that is collected at the end is known as the eluate. The void volume includes any particles too large to enter the medium, and the solvent volume is known as the column volume. 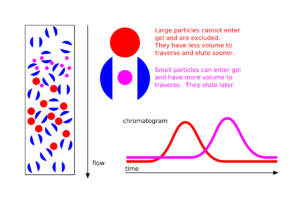 A cartoon illustrating the theory behind size exclusion chromatography

In real-life situations, particles in solution do not have a fixed size, resulting in the probability that a particle that would otherwise be hampered by a pore passing right by it. Also, the stationary-phase particles are not ideally defined; both particles and pores may vary in size. Elution curves, therefore, resemble Gaussian distributions. The stationary phase may also interact in undesirable ways with a particle and influence retention times, though great care is taken by column manufacturers to use stationary phases that are inert and minimize this issue.

Like other forms of chromatography, increasing the column length will enhance the resolution, and increasing the column diameter increases the capacity of the column. Proper column packing is important to maximize resolution: An overpacked column can collapse the pores in the beads, resulting in a loss of resolution. An underpacked column can reduce the relative surface area of the stationary phase accessible to smaller species, resulting in those species spending less time trapped in pores. Unlike affinity chromatography techniques, a solvent head at the top of the column can drastically diminish resolution as the sample diffuses prior to loading, broadening the downstream elution.

In simple manual columns, the eluent is collected in constant volumes, known as fractions. The more similar the particles are in size the more likely they will be in the same fraction and not detected separately. More advanced columns overcome this problem by constantly monitoring the eluent. 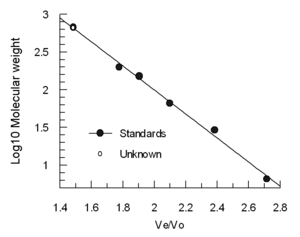 Standardization of a size exclusion column.

The collected fractions are often examined by spectroscopic techniques to determine the concentration of the particles eluted. Common spectroscopy detection techniques are refractive index (RI) and ultraviolet (UV). When eluting spectroscopically similar species (such as during biological purification), other techniques may be necessary to identify the contents of each fraction. It is also possible to analyse the eluent flow continuously with RI, LALLS, Multi-Angle Laser Light Scattering MALS, UV, and/or viscosity measurements.

SEC Chromatogram of a biological sample.

The elution volume (Ve) decreases roughly linear with the logarithm of the molecular hydrodynamic volume. Columns are often calibrated using 4-5 standard samples (e.g., folded proteins of known molecular weight), and a sample containing a very large molecule such as thyroglobulin to determine the void volume. (Blue dextran is not recommended for Vo determination because it is heterogeneous and may give variable results) The elution volumes of the standards are divided by the elution volume of the thyroglobulin (Ve/Vo) and plotted against the log of the standards' molecular weights.

In general, SEC is considered a low resolution chromatography as it does not discern similar species very well, and is therefore often reserved for the final "polishing" step of a purification. The technique can determine the quaternary structure of purified proteins that have slow exchange times, since it can be carried out under native solution conditions, preserving macromolecular interactions. SEC can also assay protein tertiary structure, as it measures the hydrodynamic volume (not molecular weight), allowing folded and unfolded versions of the same protein to be distinguished. For example, the apparent hydrodynamic radius of a typical protein domain might be 14 Å and 36 Å for the folded and unfolded forms, respectively. SEC allows the separation of these two forms, as the folded form will elute much later due to its smaller size.

SEC can be used as a measure of both the size and the polydispersity of a synthesised polymer, that is, the ability to be able to find the distribution of the sizes of polymer molecules. If standards of a known size are run previously, then a calibration curve can be created to determine the sizes of polymer molecules of interest in the solvent chosen for analysis (often THF). In alternative fashion, techniques such as light scattering and/or viscometry can be used online with SEC to yield absolute molecular weights that do not rely on calibration with standards of known molecular weight. Due to the difference in size of two polymers with identical molecular weights, the absolute determination methods are, in general, more desirable. A typical SEC system can quickly (in about half an hour) give polymer chemists information on the size and polydispersity of the sample. The preparative SEC can be used for polymer fractionation on an analytical scale. .

In SEC, mass is not measured so much as the hydrodynamic volume of the polymer molecules, that is, how much space a particular polymer molecule takes up when it is in solution. However, the approximate molecular weight can be calculated from SEC data because the exact relationship between molecular weight and hydrodynamic volume for polystyrene can be found. For this, polystyrene is used as a standard. But the relationship between hydrodynamic volume and molecular weight is not the same for all polymers, so only an approximate measurement can be obtained.[15] Another drawback is the possibility of interaction between the stationary phase and the analyte. Any interaction leads to a later elution time and thus mimics a smaller analyte size.

A big advantage of DLS coupled with SEC is the ability to obtain enhanced DLS resolution[citation needed]. Batch DLS is quick and simple and provides a direct measure of the average size but the baseline resolution of DLS is 3 to 1 in diameter. Using SEC, the proteins and protein oligomers are separated, allowing oligomeric resolution. Aggregation studies can also be done using ASEC although the aggregate concentration may not be calculated, the size of the aggregate will be measured only to be limited by the maximum size eluting from the SEC columns.

Limitations of ASEC include flow-rate, concentration, and precision. Because a correlation function requires anywhere from 3–7 seconds to properly build, a limited number of data points can be collected across the peak.