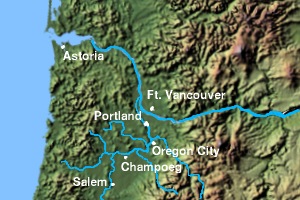 Fort Vancouver was a 19th century fur trading outpost along the that served as the headquarters of the in the company's (known to Americans as the ). Named for Captain , the fort was located on the northern bank of the in present-day , near . Today, a full-scale replica of the fort, with internal buildings, has been constructed and is open to the public.

The outpost was established in 1824, at a time when the region, known as the to the British and increasingly as the to Americans, was jointly occupied by the and Britain, a situation to which the two nations had agreed in the . At this time, the Hudson's Bay Company controlled most of the land that is now . Wanting to protect their interests north of the Columbia, they sought to set up a headquarters somewhere along the northern bank that would secure the area and act as the hub for their fur trading in the , replacing Fort George () in that capacity as it was on the river's south bank and not as convenient to the inland trade.

George Simpson was instrumental in establishing the fort, and Dr. was its first (manager). [cite book |last= Mackie |first= Richard Somerset |title= Trading Beyond the Mountains: The British Fur Trade on the Pacific 1793-1843 |year= 1997 |publisher= University of British Columbia (UBC) Press |location= Vancouver |isbn= 0-7748-0613-3 |pages= p. 318 online at [http://books.google.com/books?id=VKXgJw6K088C Google Books] ] McLoughlin would later be hailed as the Father of . Against the company's wishes he helped westbound Americans settle in the territory. He later left the company to found Oregon City in the .

Simpson chose the fort's location. The site he selected, close to the mouth of the , was flat and had easy access to the Columbia, yet was just outside the flood plain. The site was also picked because of the access to fertile farmland. Simpson wanted the fort to be self-sufficient, as food was costly to ship. In time Fort Vancouver's produced a surplus of food, some of which was used to provision other HBC posts and some of which was exported for sale in Hawaii, Russian Alaska, and other markets. The area around the fort was commonly known as "La Jolie Prairie" (the pretty prairie) or Belle Vue Point ("beautiful vista").

The that protected the fort was 750 feet long, 450 feet wide and about 20 feet high. Inside there were a total of 40 buildings, used for housing, warehouses, a school, a library, a pharmacy, a chapel, a blacksmith, plus a large manufacturing facility. Outside the s there was additional housing as well as fields, gardens, fruit orchards, a shipyard, a distillery, a tannery, a sawmill, and a dairy. The residential village, populated by employees, their families, and others, was known as because of the many Hawaiians in company employ who lived there. Fort Vancouver was by far the largest settlement of non-natives west of the Great Plains at this time. The populace of the fort and the surrounding area were mostly s and ; there were also English, Scots, Irish, Hawaiians and a large variety of Native Americans including and . The common language spoken at the fort was ; however, trading and relations with the of Chinook, Nootka, Chehalis, English, French, Hawaiian and other elements. Company records and official journals were kept in English, however, and at the head table.

The fort quickly became the center of activity in the Pacific Northwest. Every year ships would come from (via the ) to drop off supplies and trade goods in exchange for the furs. It was the nexus for the fur trade on the Pacific Coast; its influence reached from the Rocky Mountains to the Hawaiian Islands, and from into Mexican-controlled . At its pinnacle, Fort Vancouver watched over 34 outposts, 24 ports, six ships, and 600 employees. Also, for many settlers the fort became the last stop on the as they could get supplies before starting their homestead.

In 1845, McLoughlin left the Hudson's Bay Company for a homestead of his own, and founded Oregon City in the . In 1846, when the set the US&ndash;Canadian border at the , the fort found itself within American territory. Although the treaty ensured that the Hudson's Bay Company could continue to operate and had free access to navigate the , , and the Columbia, company operations were effectively stifled by the treaty and became unprofitable and were soon closed down.

While the company continued to operate out of Fort Vancouver, every year saw less and less fur trade and more and more settlers and U.S. Army warfare against the company's former customer-base. Through this time the fort saw the in the west and famous military men such as , , and . Finally, on , , the Hudson's Bay Company abandoned Fort Vancouver and moved its operations north of the border. The U.S. Army immediately renamed the combined location Fort Columbia, changing the name again to Fort Vancouver. They used it for quarters and storage, with its local population fluctuating seasonally, finally hitting bottom with a strength of 50 people in 1861. In 1866 most of the fort burned down in a large fire.

Fort Vancouver was rebuilt, with a layout that included two double-story barracks on opposite sides of the parade ground, each with a kitchen and mess room to the rear.

Seven log and four frame buildings served as Officer's Quarters. The post remained in active service, being expanded for World War I into Vancouver Barracks. Its final use was in World War II when Vancouver Barracks was used as a Staging Area for the Seattle Port Of Embarkation. At this time, the post included 3,019 acres (12.22 km²), and had billeting space for 250 officers, and 7,295 enlisted persons. It was finally closed in 1946. A plan was put together to preserve the location.

Because of the its significance in United States history, Fort Vancouver was declared a on , and redesignated as on , . This was taken a step further in 1996 when a 366 acre (1.48 km²) area around the fort, including Kanaka Village, the Columbia Barracks and the bank of the river, was established as the Vancouver National Historic Reserve maintained by the . It is possible to tour the fort; it is also the site of a large display, said to be the largest 4th of July display west of the , lasting for 31 minutes and featuring 5,440 shells in 2008. [cite news
title=Is our show the West's biggest myth?
first=Gregg
last=Herrington
work=The Columbian
date=July 4, 2008
url=http://www.columbian.com/opinion/news/2008/07/07042008_Is-our-show-the-Wests-biggest-myth.cfm]

An earth-covered pedestrian land bridge was built over the Lewis and Clark Highway, as part of the , in 2007. It connects the site with the Columbia River. [cite news
title=The Shape of Memory
first=Camela
last=Raymond
work=Portland Monthly
date=November 2007]