Tap Tap is a series of rhythm games by Tapulous available for the iOS of which several versions, both purchasable and free, have been produced. The goal of the game is to tap each of the colored balls when they reach a line at the bottom of the screen. If the ball is hit on the beat, the player gains points, but if not, it counts as a miss. If a player taps the screen without a tapper on the beat, the streak will go back to 0 and a few points will be lost except for 16x. There are also "shakes", which require the player to move the iPhone, iPod touch or iPad to the right, left, or backwards. The franchise has combined sales of over thirty-five million as of September 2009, making it one of the best-selling video game franchises of all time.[1]

The first game in the series, Tap Tap Revenge, was created and developed by Tapulous, a startup company at the time of release. The - Tap Tap Tap, Bunkohead - In My Arms and DJ Mile - Sololuna are the basic tracks in this game 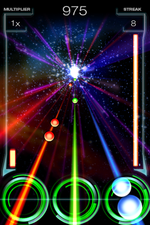 On March 3, 2009, Tap Tap Revenge 2 was released. Available as a free and separate application, it is an overhaul of the original Tap Tap Revenge and features the new graphics engine and gameplay dynamics first featured in Tap Tap Dance and Christmas With Weezer.[2] The game also introduces a new Career Achievements system.[3] There is also a "Kids Mode", improved online play with a ranking system, Facebook integration, news bulletins, improved menus, and over 200 songs with new tracks every week. Tap Tap Revenge became the most-downloaded free application on the App Store only three days after its release, and reached half a million downloads over that period.[4] On May 22, 2009, Tapulous updated the game to version 2.5, which added the availability of themes to be used during gameplay and the ability to import songs from "premium" (paid) versions of Tap Tap Revenge. Stroke 9 - Tap Tap Domination, Death Cab For Cutie - The Sound of Settling and The Crystal Method - Double Down Under are the basic songs in this game.

Tap Tap Revenge 3 is Tapulous' third flagship Tap Tap game. The main feature of Tap Tap Revenge 3 is in-game purchase of songs, which is now possible because of version 3.0 of the iPhone OS. The game was the first to be sold, and not given away, however later it was made into a free App. There are over 200 2-song packs and 6-song packs available from popular artists including Blink 182, Fall Out Boy, Smashing Pumpkins, Foo Fighters, No Doubt, Tiesto, The Killers, Korn, Megadeth, Queens of the Stone Age, Rise Against, Weezer, All-American Rejects, AFI, Keith Urban, The Crystal Method, Miike Snow, and Lynyrd Skynyrd and other artist such as newcomers Ke$ha, Lady GaGa and Owl City . Tap Tap Revenge 3 also features new social features and a new user interface. It also includes an avatar that the player can design clothing for that is bought with "coins" that are won by completing a song. Tap Tap Revenge 3 became the best selling game on the App Store ever when it hit #1 in under 24 hours in the paid App store, and as well in the free app store. LMFAO - Get Crazy, Stroke 9 - Tap Tap Domination and Tiesto - Louder Than Boom were the tracks available when a Tap Tap Revenge 3 profile was created.

Tap Tap Revenge 4 was released on December 20, 2010. It is currently free to download from the App Store.

Tap Tap Radiation a "Tap Tap" game by Tapulous exclusively for the iPad. This new game features a completely different play mode, with tapping all over the screen and not in rails.

In October 2008, Tapulous announced that they were working on a Nine Inch Nails-branded version of Tap Tap Revenge, including a special Nine Inch Nails skin and 16 songs from the band's albums Ghosts I–IV and The Slip, some of which would be specially edited for the game.[5] This was to be the first non-free game in the series.[6]

In December 2008, Tapulous released the second non-free game of the series Tap Tap Dance, a rewritten version of Tap Tap Revenge which features a revamped graphics engine, and ten songs by well-known artists including Basement Jaxx and Daft Punk. The game also introduces two and three-finger taps, tap-and-holds (similar to chords in other rhythm games), and boss levels which are uniquely-styled and more challenging than standard songs.[2]

Tapulous also released Christmas With Weezer, the third premium Tap Tap game, which features the new game engine and gameplay dynamics, and allows players to tap to a series of Christmas carols performed by rock band Weezer. The songs "Pork and Beans" and "The Greatest Man That Ever Lived" from the band's Red Album are also added to the songlist. The game also features a new "Kids Mode", in which the score rises no matter where the player taps on the screen.[7]

Tap Tap Coldplay was released to the App Store on April 2, 2009 as Tapulous's fourth premium game using the same chords as in every song they write. It features songs from Coldplay and a special edition graphical interface. On May 28, 2009, version 1.1 was released adding two more songs to the title, bringing the total to thirteen. This was another app to have a kids mode.

Lady Gaga Revenge features 14 tracks by Lady Gaga including 4 remixes of her songs. It was launched on June 9, 2009. As a promotion for Lady Gaga Revenge, Tapulous offered a contest to win four backstage passes to a Lady Gaga concert, in which fans would meet her. Participation in the contest required the submission of high scores for all songs featured in the game. Tapulous also offered a thirty-day giveaway of autographed The Fame albums to other fans who submitted scores. In an interview with USA Today, Gaga mentioned, "my record label might kill me for saying this, but you are essentially purchasing my album for $4.99 and you are also getting a game. So you are getting way more bang for your buck."[8]

Metallica Revenge is Tapulous' seventh paid Tap Tap game, and the sixth to focus on a band. The game features ten songs by Metallica. The main addition for this game is the ability to play peer-to-peer over Bluetooth and the Arcade Mode. New weapons have been added for the Arcade mode and peer-to-peer. Metallica Revenge also features a brand new 5-rail feature and continues the use of the 4 rail feature introduced in Lady Gaga Revenge. The introduction of Master of Puppets is played on start-up.

Kings of Leon Revenge is the eighth premium game Tapulous produced for the Tap Tap franchise, that features ten songs by Kings of Leon. It has all the features of Metallica Revenge. Use Somebody can be heard in the opening of the game.

Justin Bieber Revenge is the ninth premium game in the "Tap Tap" franchise, that features eleven songs by Bieber. A new graphical interface was added, as the three rails are positioned vertically and not horizontally. At the opening of the game, part of "Baby (feat. Ludacris)" can be heard.

Nirvana Revenge is the tenth non-free game in the Tap Tap series, having 13 songs that include "In Bloom" and "Rape Me." And the rails are featured in a guitar kind of view that uses the Tap Tap Revenge 3 engine. "Smells Like Teen Spirit" can be heard in the opening.

Nickelback Revenge is the eleventh paid game in the Tap Tap series, featuring 11 songs from Nickelback including a live track of "Animals" and including "This Afternoon" and "Rockstar". The boss tracks are played by putting the iPod in landscape mode and has four rails instead of the traditional three. At the opening of the game, part of "Burn It To The Ground" can be heard.

Katy Perry Revenge is the twelfth premium Tap Tap game. It features Katy Perry's songs such as "California Gurls" and "Hot n Cold". In the opening, the first few seconds of "Teenage Dream" is played the background.

Linkin Park Revenge is the thirteenth premium game in the Tap Tap series. This edition features 10 songs from Linkin Park, with 4 new songs from their new album, A Thousand Suns and 6 hit songs. The game can be played in landscape mode, and has four rails instead of original three. At the opening of the game, part of "The Catalyst" can be heard.

Lady Gaga Revenge 2 is the fourteenth premium Tap Tap game by Tapulous. It features 10 songs, 7 of which are songs from The Fame Monster. The game has four landscape boss tracks, each with its own unique theme. An excerpt of the introduction of the song "Teeth" can be heard in the opening of the game.

Katy Perry Revenge 2 is the fifteen premium Tap Tap app by Tapulous and Bing. It is a sequel to Katy Perry Revenge. It features themes of Katy Perry's E.T.. The app also allows the user to check on Perry's tweets and her tour announcements. Once the game is loaded to the starting screen, a few seconds of the starting and ending of E.T. could be heard. E.T. and Firework are the 2 free tracks on the free version of the app.

Green Day Revenge is the sixteenth premium Tap Tap game by Tapulous. It was released to coincide with the release of their live CD/DVD Awesome as F*ck released on March 22, 2011. Once the game has loaded to the starting screen, 21 Guns can be heard.

Bruno Mars Revenge is the seventeenth premium Tap Tap game by Tapulous. It was based on Bruno Mars' debut album Doo-Wops & Hooligans. It features all 10 of his songs off the album. Once the game is loaded to the starting screen, a few seconds of "Grenade" could be heard.

Born This Way Revenge is the eighteenth premium Tap Tap game by Tapulous. It was based on Lady Gaga's second album Born This Way. It features all 17 of her songs off the special edition of the album. Once the game is loaded to the starting screen, a few seconds of "Born This Way" could be heard.