The Christmas flood of 1964 was a major flood that took place in the Pacific Northwest of the United States between December 18, 1964 and January 7, 1965, spanning the Christmas holiday.[1] Considered a 100-year flood,[2] it was one of the worst floods to affect the Willamette River in Oregon, but it also had an impact on parts of southwest Washington, Idaho, Nevada, and especially Northern California.[1][3] In Oregon seventeen people died as a result of the disaster, and it caused hundreds of millions of dollars in damage.[3] The flooding covered 152,789 acres (61,831.5 ha).[4] The National Weather Service rated the flood as the fifth most destructive weather event in Oregon in the 20th century.[5]

An atypical cold spell began in Oregon about December 13, 1964, that froze the ground, and was followed by unusually heavy snow.[3][6] Next came a Pineapple Express storm bringing large amounts of warm rain.[3][6] The temperature was raised by 30 to 40 °F (-1 to 4 °C), thawing the snow, but the ground remained frozen.[6] Some places received the equivalent of a year's rain in just a few days. Albany received 13 inches (330 mm) of rain in December, almost double its average rainfall of 7 inches (200 mm).[3] Detroit recorded an extra 18 inches (460 mm) of rain, and at Crater Lake, where the average normal December rainfall is 12 inches (300 mm), there was over 38 inches (970 mm) of rain.[3] As rivers and streams began to overflow and the still-frozen ground became saturated, reports began coming in from all over the state of mudslides, closed roads and reservoirs filled far over capacity.[3] Many small towns became isolated.[3] By the end of the flood, every river in Oregon was above flood stage and more than thirty major bridges were impassable.[3]

Heavy warm rain and melting snow caused more flooding in late January 1965, after the waters had begun to recede from the December flood.[1] More mudslides occurred in places that had withstood the December flooding, and there were more deaths.[1] Many streams in the northern San Joaquin Valley reached higher flows than they had in December.[7]

The Christmas flood of 1964 was "the most severe rainstorm to ever occur over central Oregon, and among the most severe over western Oregon since the late 1870s", according to the National Weather Service office in Portland.[5]

Some of the worst mudslides occurred in the Mount Hood Corridor, and one man died in a mud and debris avalanche near Rhododendron that destroyed 15 houses.[3] Other deaths occurred from drowning and electrocution, and one man died when the new John Day bridge collapsed.[1][3]

On the Oregon Coast, downtown Reedsport was flooded with 8 feet (2 m) of water, and in Coos Bay, a massive logjam contributed to severe flooding.[3] The ports at Gold Beach and Brookings were destroyed.[3]

At Oregon City, Willamette Falls was unrecognizable as a waterfall, and the city was flooded by several feet of water.[3] In Portland, the lower deck of the Steel Bridge was underwater and had also been hit by a log raft consisting of 1,000 logs.[3] The impact of the raft severely damaged the Hawthorne Bridge, closing it for a year.[3] At 12 feet (3.7 m) above flood stage, the flooding of the Willamette River at Portland in 1964 was second only to the 1948 flood that wiped out Vanport City.[3] At its peak, the water was at the top of Downtown Portland's seawall.[1] 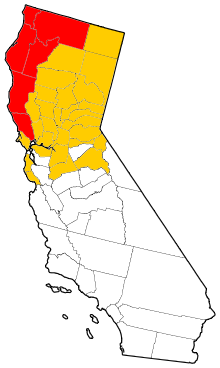 Map of California showing the 34 counties declared disaster areas during the flood. The six red counties sustained more damage than the other 28 counties combined.

Governor Brown was quoted as saying that a flood like this could "happen only once in 1,000 years," and it was later often referred to as the Thousand Year Flood.[1] The flood killed 19 people, 4,000 head of livestock, and caused $100 million in damage in Humboldt County alone.[8] Twenty-six U.S. Geological Survey (USGS) stream gages were destroyed.[7]

The Eel, Smith, Klamath, and Salmon rivers reached flood stage simultaneously, breaking all previous records.[1][7] Sixteen state highway bridges were destroyed in California's 1st congressional district, most of them on Highway 101, and another ten county bridges were destroyed in Humboldt County.[7] The flood also took out the region's major railroads, and many Del Norte and Humboldt county communities were left isolated. Klamath, Orleans, Myers Flat, Weott, South Fork, Shively, Pepperwood, Stafford, and Ti-Bar were all completely demolished. Metropolitan, Rio Dell, and Scotia were significantly damaged.[7] Crescent City, still recovering from the tsunami created by the 1964 Alaska earthquake only nine months earlier, also suffered from the floods.[7]

One of the Klamath's largest tributaries, the Trinity River, also flooded and wrought destruction along its length. The Trinity, however, did not break the 1955 Flood's records because of the newly constructed Trinity Dam, which stored 372,200 acre feet (459,100,000 m3) of runoff from the storm.[7] Nonetheless, an impressive 231,000 cubic feet per second (6,540 m3/s) of water rushed down the river at Hoopa.[12]

In the Central Valley, the Yosemite Valley was flooded, and people in Yuba City evacuated.[1] Many streams reached record flood stages, including the Feather River, Yuba River, American River, Cottonwood Creek, and Butte Creek. The flood caused the uncompleted Hell Hole Dam on the Rubicon River to fail, sending even more water downstream.[7] In total, 375,000 acres (152,000 ha) of the Central Valley was flooded.[7]

In southwest Washington, rising rivers threatened Centralia and Longview–Kelso[1] and closed Interstate 5 and all railways at flooded Kalama for over a week.[citation needed] In Nevada, the Truckee River threatened Reno.[1]