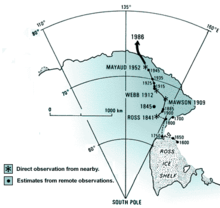 The Earth's South Magnetic Pole is the wandering point on the Earth's surface where the geomagnetic field lines are directed vertically upwards. It should not be confused with the lesser known South Geomagnetic Pole described later.

For historical reasons, the "end" of a magnet that points (roughly) north is itself called the "north pole" of the magnet, and the other end, pointing south, is called magnet's "south pole". Because opposite poles attract, the Earth's South Magnetic Pole is physically actually a magnetic north pole (see also North Magnetic Pole – Polarity).

On January 16, 1909 three men (Douglas Mawson, Edgeworth David, and Alistair Mackay) from Sir Ernest Shackleton's Nimrod Expedition claimed to have found the South Magnetic Pole,[6] which was at that time located on land. However, there is now some doubt as to whether their location was correct.[7]

The South Magnetic Pole has also been estimated by fits to global sets of data such as the World Magnetic Model (WMM) and the International Geomagnetic Reference Model (IGRF).[1] For earlier years back to about 1600, the model GUFM1 is used, based on a compilation of data from ship logs.[9]