The Christina Melton Crain Unit (formerly the Gatesville Unit) is a Texas Department of Criminal Justice prison for females in Gatesville, Texas. The prison is along Texas State Highway 36, 3 miles (4.8 km) north of central Gatesville. The unit, with about 1,317 square feet (122.4 m2) of space, is co-located with the Hilltop Unit, the Dr. Lane Murray Unit, and the Linda Woodman Unit.[1] The unit's regular program houses around 1,500 women, and it is one of Texas's main prisons for women.[2] Female prison offenders of the TDCJ are released from this unit.[3] With a capacity of 2,013 inmates, Crain is the TDCJ's largest female prison.[4] 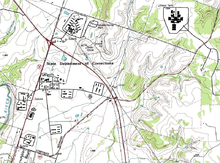 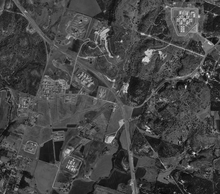 Crain's Reception Center is the place where new female arrivals to the TDCJ are processed. In addition the center houses a boot camp program.[13] The 174 bed Valley Unit houses pregnant, elderly, and mentally retarded prisoners.[13] As of 1993 72 beds are reserved for the mentally retarded.[12] In addition Valley houses the prison library.[13] Female prisoners throughout Texas who are not state jail prisoners or substance abuse felony punishment facility residents are released from the Crain Unit.[14]

Most women in Crain live in dormitories described by Leah Karotkin of the Houston Press as "drab" and "low-slung." Most inmates work seven hours per day. Jobs include painting and repairing buildings, maintaining and repairing large equipment such as boiler units, hoeing fields, and fixing potholes.[15] Crain includes a trustee camp, which was one of the first to be built by the TDCJ. The camp, which has no perimeter fence, houses non-violent minimum custody inmates who need less supervision than regular inmates and who are less likely to escape than regular inmates. The trustees live in an open dormitory and work in prisoner and prison guard beauty shops, food service, landscaping, and transportation.[15] Women in the Valley Unit work as beauty operators, clerks, cooks, kitchen workers, and landscape gardeners. Women who cannot work in those jobs work in the Special Projects Program by making crafts; they are permitted to sell their crafts for commisary money, and church groups and prison guards are some of the customers.[13] Crain has 20 beds available for the Sentence Alternative to Incarceration Program, a 90 day program for first time offenders between the ages of 17 and 25. The boot camp is housed in a former infirmary in the Reception Center. 32 isolation cells are reserved for difficult prisoners.[13]

As of 1993 women who are about to give birth are transported to the Hospital Galveston unit in Galveston, which is located five hours away from Gatesville by automobile.[16]

In 1993 Leah Karotkin of the Houston Press said "Anticipating my visit to Gatesville, I had expected more drama. Instead, I was struck by the simple endless monotony of the prison, disappointingly mundane rather than what I expected. More than hard-time punishment, alienation and loneliness seem to be the goals, or at least the most obvious effects, of the institution. Still, it's clear, Gatesville is a pretty rough place to be."[17] In 2010 Robert Perkinson, author of Texas Tough: The Rise of America's Prison Empire, said that Crain was "not the hardest place to do time in Texas."[18]

Major Janice Wilson, who was the head prison guard in 1993, said during that year that many women in Crain gain close bonds with women who they sympathize or feel sorry for. Some women had been in romantic relationships where they received battery, and some had experienced several romantic relationships that, to them, were not good. According to Wilson these women become friends, and some of the women engage in homosexual relationships. As of 1993 the institution forbids sexual conduct between two prisoners, and women can lose class time if they are caught.[15] In several published reports that existed by 1993, prisoners said that the isolation is a factor in the sexual relationships that are formed at the unit. Wilson added that the aspect many women dislike the most about Crain is the lack of accessibility to their families and children. For many, visits occur infrequently and women do not often get to make telephone calls. Many relatives have very little money and do not have much time that they can use to visit their imprisoned relatives. Wilson said that a constant underlying internal tension existed at Crain.[13]

Robert Perkinson, author of Texas Tough: The Rise of America's Prison Empire, said that the Crain Unit has a "rich assortment of programming" compared to most Texas prisons. The unit includes a female boot camp and a Substance Abuse Felony Punishment (SAFP) facility.[19]