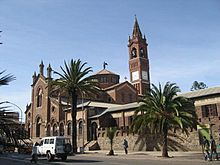 Eritrea along with its southern neighbour Ethiopia was one of the first Christian countries in the world having officially adopted Christianity as the state religion in the 4th century. At the same time, it was also one of the first Muslim settlements in Africa, where a group of Muslims facing persecution in Mecca travelled to Abyssinia, (now Ethiopia) through modern day Eritrea. Christians in Eritrea constitute to three main groups; the Eritrean Orthodox Church, the Roman Catholic Church and the Evangelical Church[disambiguation needed

Following the independence of Eritrea from Ethiopia in 1993, the newly independent Eritrean government appealed to Pope Shenouda III of the Coptic Orthodox Church of Alexandria for Eritrean Orthodox autocephaly.

Abune Antonios was elected in 2004-03-05, and enthroned as the third Patriarch of Orthodox Tewahedo Church of Eritrea on 2004-04-24. Pope Shenouda III presided at the ceremony in Asmara, together with the Holy Synod of the Eritrean Orthodox Church and a Coptic Orthodox Church delegation.

In August 2005, the Patriarch of Orthodox Tewahedo Church of Eritrea, Abune Antonios, was confined to a strictly ceremonial role. In a letter dated 2006-01-13 Patriarch Abune Antonios was informed that following several sessions of the church's Holy Synod, he had been formally deposed. In a written response that was widely published the Patriarch rejected the grounds of his dismissal, questioned the legitimacy of the synod, and excommunicated two signatories to the 13 January letter, including Yoftahe Dimetros, whom the Patriarch identified as being responsible for the church's recent upheavals. Patriarch Antonios also appealed his case to the Council of the Monasteries of the Eritrean Orthodox Church and to the Coptic Orthodox Church of Alexandria. Abune Antonios was deposed by the Eritrean Holy Synod. Many believe that Abune Antonios was wrongly deposed and still consider him Patriarch. Many Eritrean Orthodox followers disagree with the Eritrean government making decisions in religious matters.

Catholicism in Eritrea and Ethiopia

The Portuguese voyages of discovery at the end of the fifteenth century opened the way for direct contacts between the Catholic Church and the Ethiopian Orthodox Church. Due largely to the behaviour of the Portuguese Afonso Mendes whom Pope Urban VIII appointed as Patriarch of Ethiopia in 1622 and who was expelled from the country in 1636, these contacts, which had seemed destined for success, led instead to the complete closure of Ethiopia to further contact with Rome.

In 1839, Saint Justin de Jacobis arrived in the country as Prefect Apostolic of Ethiopia, in charge therefore of a Latin-rite jurisdiction. He preferred instead to use the Ethiopic liturgical rite. Many Ethiopian priests were attracted to his sanctity and his teaching, thus giving rise to what became in 1930 the Ethiopic Catholic Church, when, in view of its continual growth, an ordinariate for the Ethiopic Rite faithful of Eritrea, entrusted to an Eritrean bishop, was established. Eritrea, an Italian possession since 1894, already had a separate ecclesiastical jurisdiction, headed by an Italian titular bishop, for Latin-rite Catholics, mainly Italians.

The Latin Rite had become established in the south of Ethiopia in areas that had not been Christian and that were incorporated into the modern country only at the end of the nineteenth century. The Italian occupation of Ethiopia in 1936 gave rise to an increase in the number of Latin Rite jurisdictions, but the expulsion of foreign missionaries at the end of the Second World War meant that the Ethiopic Rite clergy had to take responsibility for larger areas than before. Accordingly, in 1951, the Ethiopic Rite Apostolic Exarchate of Addis Ababa was established, and the ordinariate for Eritrea was elevated to the rank of exarchate. Ten years later, on 9 April 1961, an Ethiopic metropolia (ecclesiastical province) was established, with Addis Ababa as the metropolitan see and Asmara (in Eritrea) and Adigrat (in Ethiopia) as suffragan eparchies.

In 1995, two new eparchies, Barentu and Keren, were established in Eritrea, and the Latin Rite apostolic vicariate was abolished. Eritrea thus became the only country where all Catholics, whatever their personal liturgical rite, belong to an Eastern Catholic jurisdiction. In 2003, one more eparchy was created in Endibir in the Southern Nations, Nationalities and Peoples' Region of Ethiopia, with the result that the Ethiopic Catholic Metropolitan Church now consists of six sees, three in Ethiopia and three in Eritrea.

Ge'ez, a Semitic language fallen out of daily use several centuries ago, is the liturgical language of the Ethiopic Church, whose liturgy is based on the Coptic.

Protestants in Eritrea number about 91,232, which represents 2% of the population. The Evangelical Lutheran Church is the only recognized Protestant Church. Torture is used against independent Protestants in Eritrea causing more than 2000 Christians being subject to arrest in 2006. The U.S. State Department names it a Country of Particular Concern due to its violation of religious liberty. It has been reported that entire families are thrown into jail.

In 2009, International Christian Concern said that over 3,000 Christians were being held prisoner in Eritrea, at times in underground dungeons or old metal shipping containers, and alleged a December 2009 mass arrest of 30 mostly elderly women who were praying together at an Evangelical church with a Methodist background.[3] According to the Barnabas Fund, in April 2010 a 28-year-old student died after she was held in a metal shipping container for 2 years, after being arrested for attending a Protestant Bible study.