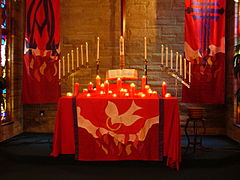 Christian denominations have various doctrinal variations on their beliefs regarding the Holy Spirit.

Around the 6th century, the word Filioque was added to the Nicene Creed, defining as a doctrinal teaching that the Holy Spirit "proceeds from the Father and the Son." While the Eastern Catholic churches are required to believe the doctrinal teaching contained in the Filioque, they are not all required to insert it in the Creed when it is recited during Masses.

Eastern Orthodoxy proclaims that the Father is the eternal source of the Godhead, from whom the Son is begotten eternally, and also from whom the Holy Spirit proceeds eternally. Unlike the Roman Catholic Church and Western Christianity in general, the Orthodox Church does not espouse the use of the Filioque ("and the Son") in describing the procession of the Holy Spirit. Filioque was mentioned for the first time at the Third Council of Toledo in 589 and it was added by the Roman Catholic Church to the Credo in the 11th century. The Holy Spirit is believed to eternally proceed from the Father, as Christ says in John 15:26, and not from the Father and the Son, as the Roman Catholic and Protestant churches claim. The Greek Orthodox Church teaches that the Holy Spirit proceeds through the Son, but only from the Father. Orthodox doctrine regarding the Holy Trinity is summarized in the Symbol of Faith (Nicene-Constantinopolitan Creed). Oriental Orthodox usage coincides with Eastern Orthodox usage and teachings on the matter. The Assyrian Church of the East also retains the original formula of the Creed without the Filioque.

The majority of mainstream Protestantism hold similar views on the theology of the Holy Spirit as the Roman Catholic Church, as described above. There are significant differences in belief between Pentecostalism and the rest of Protestantism.[1][2]

Restoration Movement and Churches of Christ

During the late 19th century, the prevailing view in the Restoration Movement was that the Holy Spirit currently acts only through the influence of inspired scripture.[3] This rationalist view was associated with Alexander Campbell, who was "greatly affected by what he viewed as the excesses of the emotional camp meetings and revivals of his day."[3] He believed that the Spirit draws people towards salvation, but understood the Spirit to do this "in the same way any person moves another—by persuasion with words and ideas." This view came to prevail over that of Barton W. Stone, who believed the Spirit had a more direct role in the life of the Christian.[3] Since the early 20th century, many among the Churches of Christ have moved away from this "word-only" theory of the operation of the Holy Spirit.[4] As one student of the movement puts it, "[f]or better or worse, those who champion the so-called word-only theory no longer have a hold on the minds of the constituency of Churches of Christ. Though relatively few have adopted outright charismatic and third wave views and remained in the body, apparently the spiritual waves have begun to erode that rational rock."[3] 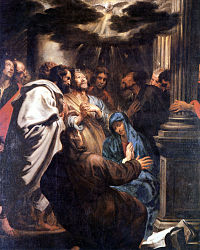 The Holy Spirit descending at Pentecost by Anthony van Dyck, circa 1618.

While the Holy Spirit is acknowledged as God in all mainstream denominations, he is given particular emphasis in Pentecostal churches. In those churches he is seen as the giver of natural and supernatural gifts, such as tongues and prophecy, to modern-day Christians.

The Christian movement called Pentecostalism derives its name from the event of Pentecost, the coming of the Holy Spirit when Jesus' disciples were gathered in Jerusalem.[Acts 2] Pentecostals believe that when a believer is "baptized in the Holy Spirit", the gifts of the Spirit (also called the charismata) are activated in the recipient to edify the body of Christ, the church. Some of these gifts are listed in 1 Corinthians 12.

The Pentecostal movement places special emphasis on the work of the Holy Spirit, and especially on the gifts mentioned above, believing that they are still given today. Much of Pentecostalism differentiates the "baptism with the Holy Spirit" from the salvific born again experience, considering it a usually distinct experience in which the Spirit's power is received by the Christian in a new way, with the belief that the Christian can be more readily used to perform signs, miracles, and wonders for the sake of evangelism or for ministry within the church (the body of Christ) and the community. There are also some Pentecostals who believe that Spirit baptism is a necessary element in salvation, not a "second blessing". These Pentecostals believe that in the baptism in the Holy Spirit, the power of the Spirit is released in their lives.

Many Pentecostals believe that the normative initial evidence of this infilling (baptism) of the Holy Spirit is the ability to speak in other tongues (glossolalia), and that tongues are one of several spiritual manifestations of the presence of the Holy Spirit in an individual believer's life.

Groups with Unitarian theology such as Polish Socinians, the 18th-19th Century Unitarian Church, Christadelphians conceive of the Holy Spirit not as a person but an aspect of God's power.[5] Christadelphians believe that the phrase Holy Spirit refers to God's power or mind/character, depending on the context.[6] Though Arius himself believed that the Holy Spirit was a person or high Angel, modern Arian or Semi-Arian Christian groups such as Dawn Bible Students and Jehovah's Witnesses believe, the same as Unitarian groups, that the Holy Spirit is not an actual person but is God's "power in action", like God's divine "breath" or "energy", that he uses to accomplish his will and purpose in creation, redemption, sanctification, and divine guidance, and they do not typically capitalize the term.[7] They define the Holy Spirit as "God's active force", and they believe that it proceeds only from the Father.[7] A Jehovah's Witness brochure quotes Alvan Lamson: "...the Father, Son, and... Holy Spirit [are] not as co-equal, not as one numerical essence, not as Three in One... The very reverse is the fact."[8]

In the Latter-day Saint movement, the Holy Ghost (usually synonymous with Holy Spirit.)[10] is considered the third distinct member of the Godhead (Father, Son and Holy Ghost),[11] and to have a body of "spirit,"[12] which makes him unlike the Father and the Son who are said to have bodies "as tangible as man's."[13] According to LDS doctrine, the Holy Spirit is believed to be a person,[13][14] however having a body of spirit, he is able to pervade all worlds.[15] Mormons believe that the Holy Spirit is part of the "Divine Council" or "Godhead", but that the Father is greater than both the Son and the Holy Spirit.[15]

The Unity Church interprets the religious terms Father, Son, and Holy Spirit metaphysically, as three aspects of mind action: mind, idea, and expression. They believe this is the process through which all manifestation takes place.[16]

As a movement that developed out of Christianity, Rastafari has its own unique interpretation of both the Holy Trinity and the Holy Spirit. Although there are several slight variations, they generally state that it is Haile Selassie who embodies both God the Father and God the Son, while the Holy (or rather, "Hola") Spirit is to be found within Rasta believers (see 'I and I'), and within every human being. Rastas also say that the true church is the human body, and that it is this church (or "structure") that contains the Holy Spirit.