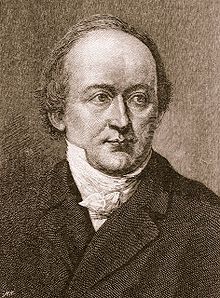 Bunsen was born at Korbach, an old town in the little German principality of Waldeck.

His father was a farmer who was driven by poverty to become a soldier. Having studied at the Korbach Grammar school and Marburg University, Bunsen went in his nineteenth year to Göttingen, where he supported himself by teaching and later by acting as tutor to William Backhouse Astor, John Jacob's son. He won the university prize essay of the year 1812 by a treatise on the Athenian Law of Inheritance, and a few months later the University of Jena granted him the honorary degree of doctor of philosophy.

During 1813 he travelled with Astor in South Germany, and then turned to the study of the religion, laws, language, and literature of the Teutonic races. He had read Hebrew when a boy, and now worked at Arabic at Munich, Persian at Leiden, and Norse at Copenhagen. At the close of 1815 he went to Berlin, to show Niebuhr the plan of research which he had mapped out. Niebuhr was so impressed with Bunsen's ability that, two years later, when he became Prussian envoy to the papal court, he made the young scholar his secretary. The intervening years Bunsen spent in assiduous labour among the libraries and collections of Paris and Florence. In July 1817 he married Frances Waddington, eldest daughter and co-heiress of Benjamin Waddington of Llanover, Monmouthshire.

As secretary to Niebuhr, Bunsen was brought into contact with the Vatican movement for the establishment of the papal church in the Prussian dominions, to provide for the largely increased Catholic population. He was among the first to realize the importance of this new vitality on the part of the Vatican, and he made it his duty to provide against its possible dangers by urging upon the Prussian court the wisdom of fair and impartial treatment of its Catholic subjects. In this object he was at first successful, and both from the Vatican and from Frederick William III, who put him in charge of the legation on Niebuhr's resignation, he received unqualified approbation.

Owing partly to the wise statesmanship of Count Spiegel, archbishop of Cologne, an arrangement was made by which the thorny question of "mixed" marriages (i.e., between Catholic and Protestant) would have been happily solved; but the archbishop died in 1835, the arrangement was never ratified, and the Prussian king was foolish enough to appoint as Spiegel's successor the narrow-minded partisan Baron Droste. The pope gladly accepted the appointment, and in two years the forward policy of the Jesuits had brought about the strife which Bunsen and Spiegel had tried to prevent. Bunsen rashly recommended that Droste should be seized, but the coup was so clumsily attempted, that the incriminating documents were, it is said, destroyed in advance. The government, in this impasse, took the safest course, refused to support Bunsen, and accepted his resignation in April 1838.

Via Switzerland to England, ambassador

After leaving Rome, where he had become intimate with all that was most interesting in the cosmopolitan society of the papal capital, Bunsen went to England, where, except for a short term as Prussian ambassador to Switzerland (1839–1841), he was destined to pass the rest of his official life. The accession to the throne of Prussia of Frederick William IV, on 7 June 1840, made a great change in Bunsen's career. Ever since their first meeting in 1828 the two men had been close friends and had exchanged ideas in an intimate correspondence, published under Ranke's editorship in 1873. Enthusiasm for evangelical religion and admiration for the Anglican Church they held in common, and Bunsen was the instrument naturally selected for realizing the king's fantastic scheme of setting up at Jerusalem a Prusso-Anglican bishopric as a sort of advertisement of the unity and aggressive force of Protestantism.

The special mission of Bunsen to England, from June to November 1841, was completely successful, in spite of the opposition of English high churchmen and Lutheran extremists. The Jerusalem bishopric, with the consent of the British government and the active encouragement of the archbishop of Canterbury and the bishop of London, was duly established, endowed with Prussian and English money, and remained for some forty years an isolated symbol of Protestant unity and a rock of stumbling to Anglican Catholics.

During his stay in England Bunsen had made himself very popular among all classes of society, and he was selected by Queen Victoria, out of three names proposed by the king of Prussia, as ambassador to the Court of St. James's. In this post he remained for thirteen years. His tenure of the office coincided with the critical period in Prussian and European affairs which culminated in the revolutions of 1848. With the visionary schemes of Frederick William, whether that of setting up a strict episcopal organization in the Evangelical Church in Prussia, or that of reviving the defunct ideal of the medieval Empire, Bunsen found himself increasingly out of sympathy. He realized the significance of the signs that heralded the coming storm, and tried in vain to move the king to a policy which would have placed him at the head of a Germany united and free. He felt bitterly the humiliation of Prussia by Austria after the victory of the reaction; and in 1852 he set his signature reluctantly to the treaty which, in his view, surrendered the "constitutional rights of Schleswig and Holstein". His whole influence was now directed to withdrawing Prussia from the blighting influence of Austria and Russia, and attempting to draw closer the ties that bound her to Britain. On the outbreak of the Crimean War he urged Frederick William to throw in his lot with the western powers, and create a diversion in the north-east which would have forced Russia at once to terms. The rejection of his advice, and the proclamation of Prussia's attitude of "benevolent neutrality", led him in April 1854 to offer his resignation, which was accepted.

Bunsen's life as a public man was now practically at an end. He retired first to a villa on the Neckar near Heidelberg and later to Bonn. He refused to stand for a seat, in the Liberal interest, in the Lower House of the Prussian diet, but continued to take an active interest in politics, and in 1855 published in two volumes a work, Die Zeichen der Zeit: Briefe, etc., which exercised an immense influence in reviving the Liberal movement which the failure of the revolution had crushed. In September 1857 Bunsen attended, as the king's guest, a meeting of the Evangelical Alliance at Berlin; and one of the last papers signed by Frederick William, before his mind gave way in October, was that which conferred upon him the title of baron and a peerage for life. In 1858, at the special request of the regent (afterwards the emperor) William, he took his seat in the Prussian House of Lords, and, though remaining silent, supported the new ministry, of which his political and personal friends were members.

Literary work was, however, his main preoccupation during all this period. Two discoveries of ancient manuscripts made duririg his stay in London, the one containing a shorter text of the Epistles of St Ignatius, and the other an unknown work On All the Heresies, by Bishop Hippolytus, had already led him to write his Hippolytus and his Age: Doctrine and Practice of Rome under Commodus and Severus (1852).

He now concentrated all his efforts upon a translation of the Bible with commentaries. While this was in preparation he published his God in History, in which he contends that the progress of mankind marches parallel to the conception of God formed within each nation by the highest exponents of its thought. At the same time he carried through the press, assisted by Samuel Birch, the concluding volumes of his work (published in English as well as in German) Egypt's Place in Universal History--containing a reconstruction of Egyptian chronology, together with an attempt to determine the relation in which the language and the religion of that country stand to the development of each among the more ancient non-Aryan and Aryan races. His ideas on this subject were most fully developed in two volumes published in London before he left England--Outlines of the Philosophy of Universal History as applied to Language and Religion (2 vols., 1854).

In 1858 Bunsen's health began to fail; visits to Cannes in 1858 and 1859 brought no improvement, and he died on 28 November 1860. One of his last requests having been that his wife would write down recollections of their common life, she published his Memoirs in 1868, which contain much of his private correspondence. The German translation of these Memoirs has added extracts from unpublished documents, throwing a new light upon the political events in which he played a part. Baron Humboldt's letters to Bunsen were printed in 1869.

Bunsen's English connection, both through his wife (d. 1876) and through his own long residence in London, was further increased in his family. He had ten children, including five sons, Henry (1818–1855), Ernest (1819–1903), Karl (1821–1887), Georg (1824–1896) and Theodor (1832–1892). Of these Karl (Charles) and Theodor had careers in the German diplomatic service; and Georg, who for some time was an active politician in Germany, eventually retired to live in London; Henry, who was an English clergyman, became a naturalized Englishman, and Ernest, who in 1845 married an Englishwoman, Miss Gurney, subsequently resided and died in London. The form of "de Bunsen" was adopted for the surname in England. Ernest de Bunsen was a scholarly writer, who published various works both in German and in English, notably on Biblical chronology and other questions of comparative religion. His son, Sir Maurice de Bunsen (b. 1852), entered the English diplomatic service in 1877; and after a varied experience became minister at Lisbon, and was Ambassador to Vienna at the outbreak of the First World War.