The Christchurch Cougars are a professional men's basketball team based in Christchurch, Canterbury, New Zealand. They play in the New Zealand National Basketball League.

They play their home games at Cowles Stadium in Aranui. The stadium has a capacity of 2000 with 500 temporary and 1500 permanent seats. While much of the team came into the NBL to replace The Canterbury Rams they are an entirely different organisation run by different people.

The Cougars began in 2009, replacing the Canterbury Rams, one of the New Zealand National Basketball League's foundation sides. In the first four years of NBL competition the league was dominated by the North Island sides like Auckland Stars and Wellington Saints who won two titles each. In the early years the side struggled to attract quality players due to the appeal of the North Island cities and the job opportunities offered.

Canterbury ended up dominating the NBL in the next few years. From 1986-1994 the Rams played in seven grand finals winning four of them. This successful nine year tenure was thanks to stand-out American players like Eddie Anderson, Angelo Hill and Clyde Huntley who were three of the league's best ever early import players. Other players to play a key role during this era were local players such as Terry Brunel, Glen Denham, Gilbert Gordon, John Hill, John "Dutchie" Rademakers, Graham Timms, Chris Tupu, Ian Webb, youngster Ralph Lattimore and another star American import player Kenny Perkins (father of Boston Celtic Kendrick Perkins) who later played for the Nelson Giants. The architects of this success were coaches Gary Pettis who led the team from 1986–88 and Keith Mair who took over in 1989.

At the start of the 1999 New Zealand NBL season, the rams moved into the huge new Westpac Centre, renamed Westpac Arena, renamed again to CBS Canterbury Arena on 18 June 2010, in Addington, Christchurch. There was a great deal of anticipation before the season in Christchurch that the rams could finally win some silverware after not having won a title since 1992. This was combined with an exciting roster consisting of American Clifton Bush, Canadien Robert Wilson, and an up and coming team of kiwis like David Langrell, Jason Kyle and Craig Farrant. The rams started the 1999 season slowly, but made the playoffs ending up with a 10-6 record in second place. The rams won the right to host the playoff series at Westpac Centre and after defeating the North Harbour Kings in the semi final, they progressed onto the grand final against Auckland. It was not to be Canterbury's year however, with the rams going down in a close fought final to Auckland.

There was a massive cleanout at the Canterbury Rams under new management after the 1999 season. Head coach Bert Knops was replaced by Matt Ruscoe for the 2000 season and most the cast from 1999 were not retained. The rams fielded an extremely young roster and this showed in their play, finishing second last with only two wins against North Harbour and Otago. After a year rebuilding in 2001, a season that saw the team improve drastically, including a 50 point home victory over the Saints. Derision from then owner John Watson into coach and player matters undermined the impact of Ruscoe's tenure ending with Watson being appointing after the successful in season recruitment of league legend Terrence Lewis. Canterbury had an excellent year in 2002 under first year head coach John Watson. With a new star signing in Terrence Lewis from Wellington and American centre John Whorton, Canterbury had two of the best import players in the league. Whorton and Lewis were the league leaders in scoring all year long, carrying Canterbury to an 11-5 regular season record, good enough for third place. In the semi final Canterbury travelled to Hamilton to take on the Waikato Titans . After three quarters the Rams were playing good basketball and led by 12 points and they appeared headed for the grand final in Watson's first year as coach . Things turned ugly in the final quarter though and Waikato came from behind to beat the rams, and eventually win the NBL grand final, a week later. Ominously Lewis did not return sighting coaching as a major reason.

In 2003 and 2004 the rams failed to make the playoffs under the coaching of John Watson and then Pete McAllister. After a dismal 2003 season when the rams finished second last after their outstanding 2002 season, John Whorton - arguably one of the league's best American players of the decade was not retained. On June 14, 2003 John Whorton had scored a league-record 50 points in a 99-94 Rams victory over the Hawkes Bay Hawks in Napier. 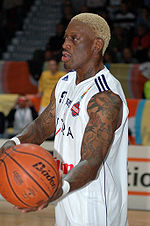 Dennis Rodman was rumored to be signing with the Rams before negotiations broke down.

During the 2004 off-season word circulated around that the Rams were in line to sign former NBA bad-boy Dennis Rodman for the 2005 NBL season. This would have been a major coup for the Rams, as attendances would have sky-rocketed. In the end though, the rumours amounted to nothing, with Rodman's price tag, being far too expensive far the Rams to afford. [1]

In 2005 under Pete McAllister the rams began the season brilliantly starting the season 5-1 thanks to the strong play of new imports Mike Gardener and Ryan Prillman. Canterbury started to struggle though as the season progressed and although the team finished with a highly satisfactory 10-8 record, they narrowly missed out on the final playoff spot finishing in fifth position. After the 2005 NBL season Pete McAllister got a job at New Zealand basketball and he was subsequently forced to resign as the Rams head coach. In January 2006, American Chris Sparks was named head coach to fill McAllister's void.

Canterbury fielded a very youthful roster in 2006, with half of the squad under the age of 22 and requiring a special dispensation from Basketball New Zealand to compete in the league. The Rams missed the playoffs finishing with a 6-12 final record. American import Dennis Trammell was a stand-out for the Rams averaging 25 points a game. Jeremy Kench had a break out year for Canterbury with 18 points a game, significantly up on his 2 point average from the previous year. He was also named to the Tall Blacks National team roster. Head Coach Chris Sparks was named a "Coach of the Year" finalist by Basketball New Zealand in his first season as Head Coach.

The Rams had a disappointing 2007 NBL season finishing 4-14. Point guard Jeremy Kench followed up his breakout 2006 year with another strong season. One of the rare highlights was the improvement of young centre Mike Townsend.

In late 2007 the Canterbury Rams announced huge changes. Head Coach and 2006 "Coach of the Year" finalist, Chris Sparks, who coached the Rams in 2006 and 2007, returned to America to coach for the prestigious Valparaiso University basketball team. Bert Knops who coached the Rams from 1996 to 1999 was reappointed. The Canterbury Basketball Association had a management contract for the Rams for three years.Canterbury basketball also announced in late 2007 that the Rams will return to their former home arena of Cowles Stadium as of the start of 2008, after nine years at the Westpac Arena. Unfortunately at the beginning of the 2008 season the CBA announced a shortfall of over 250,000 due largely to their mismanagement of the team (coinciding with the 2008 failure of the CBA to keep the Canterbury Woman's team afloat), leaving the Rams ongoing participation in the league tedious until new sponsor Marley and NZCT moved in to bail the team out. The Rams struggled on the court, missing the playoffs with a 6-12 record. Unfortunately in late 2008, just before the new season deadline for entering the League the Canterbury Basketball Association reneged on their management agreement, leaving the Rams a small window to prepare a new management plan for the upcoming season. The Rams after discussions with NBL board decided not to enter the 2009 competition.

The Cougars entered the 2009 competition in place of the Rams. The new Christchurch team recruited well keeping former Rams player Jeremy Kench and recruiting Tall Blacks Point Guard Paul Henare and Swingman Paora Winitana. They imported Australian Tim Behrendorff and American Trenton Wurtz. In their first year in the NBL the Cougars managed to make the semi-finals before losing to the Waikato Pistons. Guard Paul Henare picked up the teams only award for the 2009 season winning the most assists award (with 6.5apg).

For the 2011 NBL season, the Cougars have pulled due to the Christchurch earthquake that happpened in February, 2011.

Players and Staff of note