Epiphany is the second studio album by American R&B and soul singer–songwriter Chrisette Michele, released May 5, 2009 on Def Jam Recordings in the United States. Recording sessions for the album took place during 2008 to 2009. In January 2009, the title track "Epiphany" was released as its lead single.[1]

Epiphany debuted at number one on the US Billboard 200 chart, while selling 83,000 copies in its first week. Upon its release, the album received generally positive reviews from music critics, based on an aggregate score of 71/100 from Metacritic.[2] 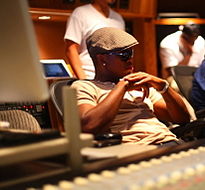 Chrisette Michele told Billboard's Mariel Concepcion that her new album would be "more upbeat and youthful".[3] Production for the album was handled by Chuck Harmony, Claude Kelly, Bei Maejor, and Ne-Yo.[3]

Michele says one of her favorite tracks is the piano-based "Blame It on Me", in which she croons, "Blame it on me/Say it's my fault/Say I left you out in the cold with a broken heart/I really don't care/I'm not crying no more/Say I'm a liar, a cheater, say anything that you want/As long as it's over."[3] "On My Own", Michele says, reminds her of her father. "I'm very close to my dad, but recently I've learned how to handle situations on my own, without having him step in for me, and it took a lot of me to be able to do that", she admits.[3]

Critical response to the album was generally positive.[2] Allmusic's Andy Kellman wrote that "the material, while mostly well-crafted, runs together as a block of slow, serious songs broken up by only a couple brief upswings in energy" and how "Chrisette, naturally, sounds outstanding throughout, as a supernaturally talented vocalist whose songs are nonetheless easily relatable to anyone going through a breakup—or, to a significantly lesser extent here, newfound love." He also felt that the album "could have really used more rhythmic punch than a token throwback strutter."[5] Maiya Norton of Vibe commented on how her album gained some edge, expressing some anger and heartbreak.[13] In his consumer guide for MSN Music, critic Robert Christgau gave Epiphany a rating of honorable mention (

),[15] indicating "a worthy effort consumers attuned to its overriding aesthetic or individual vision may well like".[16]

Despite noting its production as a weakness, Miami Herald writer Adrian Ruhi gave the album 3 out of 4 stars and commended Michele for her vocals.[17] In a positive review, The Koalition said that "it would seem almost impossible for Chrisette Michele to avoid the "sophomore slump", but she finds a way by simply catering to an age old rule: just create great pieces of music." In some reviews her voice has been compared to the likes of Ella Fitzgerald.[18] Giving the album four out of five stars, Timothy Michael Carson of About.com favored her unique, distinctive strong vocals, her cohesiveness, and the song "Blame It on Me", but was disappointed in the fact it had less of a jazz influence than her debut album I Am.[4]