Hideki Kamiya described Chris as a "blunt, tough-guy type", admitting that he was a fan of this archetype.[4] Resident Evil 5 producer Jun Takeuchi said that the series' fans "would really love" a video game featuring both Chris and Leon S. Kennedy as the protagonists due to their popularity, and it would be "pretty dramatic" if the two characters never met when the series ended.[5] Chris' increased muscle mass in the game was to show that he had trained heavily in order to fight the series' powerful villain Albert Wesker bare-handed.[6] Modeler Yosuke Yamagata added that they "made a new design that retained their signature color — green for Chris, blue for Jill — to carry over the same look from the past. The facial structures are mainly based on the visuals of the GameCube version, and we added various details to these in order to develop a realistic structure."[7] 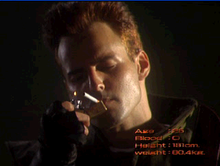 A scene from the uncut intro sequence of the 1996 Resident Evil. The original Japanese release of the game had the live-action actor portraying him smoke a cigarette, which was removed in the overseas version of the game, but restored in the PC port.[9]

Chris Redfield first appeared in the original Resident Evil as a main protagonist is as one of two playable protagonists. In the game, he is a member of the local police special force STARS' Alpha Team which was sent to investigate the disappearance of Bravo Team. Chris, accompanied by Albert Wesker, Barry Burton and Jill Valentine, soon find themselves trapped in the nearby mansion, which is filled with horrific monsters and other deadly dangers. Chris' scenario is more challenging than Jill's, as he has a smaller carrying capacity and lacks certain items (such as the lockpick and grenade launcher), but can take a lot more damage from enemies than Jill can.[10]

Chris returns in Resident Evil Code: Veronica as the protagonist of the second half of the game, where he attempts to rescue his younger sister, Claire, from Umbrella Corporation's research facilities in Rockfort Island and in Antarctica. Eventually, he confronts Alexia Ashford, the creator of the T-Veronica virus, and Wesker, who had survived the destruction of the mansion.

Chris is the one of main characters of Resident Evil: The Umbrella Chronicles,[11] in which he reunites with Jill Valentine. The two of them join a private biohazard-containment force and in 2003 embark on a mission to destroy the Umbrella Corporation after hearing rumours of a new BOW being developed, resulting in their successful attack on an Umbrella facility located in the Caucasus region.

Chris is the main protagonist in Resident Evil 5,[12] in which he is a founding member of the UN paramilitary group Bio-terrorism Security Assessment Alliance (BSAA). In the game, Chris is investigating a terrorist threat in Kijuju, Africa while looking for the missing and presumed dead Jill. Accompanying him is his new partner Sheva Alomar. Eventually, they manage to find and free Jill, and to ultimately defeat and destroy Wesker.

He also appears in the crossover fighting game Marvel vs. Capcom 3: Fate of Two Worlds as a playable character. The game's first cinematic trailer showed him fighting The Incredible Hulk.[14]

Chris will return in the latest installment of the main series, Resident Evil Revelations, with Jill Valentine.[15]

In the rejected Resident Evil movie script by George A. Romero, Chris is a Native American civilian and ultimately one of the few survivors.[16]

Chris appears in the 2010 live-action film Resident Evil: Afterlife,[8] played by Wentworth Miller.[17] He is imprisoned in a maximum security cell by prisoners as a cruel joke after his unit's attempt to control the T-virus in Los Angeles goes haywire and the survivors who find him believe him to be a prisoner. He is reunited with his sister Claire who cannot remember him due to memory damage caused by an Umbrella mind-control device. He, Alice and Claire eventually defeat Albert Wesker and rescue imprisoned survivors being used for Umbrella's experiments.

During the release of the Japanese Sega Saturn version of the original game, Capcom published a promotional sourcebook The True Story Behind Biohazard, containing an original short story titled Biohazard: The Beginning by Hiroyuku Ariga. The story depicts the events prior to the first game and fleshes out his character, describing the deaths of his parents in a car accident and his service in the USAF.

The character's critical reception was generally mixed and he was notable as a dividing character. In 2009, Gameplanet stated that if both Leon and Chris would appear in the next Resident Evil it would be "awesome", adding that both are the main protagonists of the series.[21] Chris was also repeatedly compared with Leon by IGN, both of them being regarded as the leading heroes of the Resident Evil series.[22][23] In 2010, GamesRadar featured his team-up with Sheva in their article about the gaming's "most violent double acts" for their actions in Resident Evil 5.[24] On the other hand, Chris was ranked fifth in IGN's 2009 list of top 10 most overrated video game characters, as Leon was favored over him due to their abilities, with a suggestion that Chris should "ditch the 'roids and concentrate on getting the job done".[25] Moreover, he was also included in UGO.com's 2010 list of top 10 out of luck video game characters that cited his failures across the series.[26]

Chris' new and controversial design in the Resident Evil 5 received a largely negative reception and was often outright ridiculed. When he was first announced to appear in Resident Evil 5, GameSpy called him to be "a cross between Colin Farrell and Hugh Jackman".[27] Examiner.com ranked Chris as second on a list of the top seven "ridiculously large biceps in gaming", noticing a change from "any other scrawny punk in an officer's uniform" to his new one, stating to could be the result of PowerBars and steroids and as a way to balance Leon's appearance in Resident Evil 4.[28] GamesRadar compared both his Code Veronica and Resident Evil 5 designs in their article trying to find out which Resident Evil hero is best dressed for a zombie apocalypse, finding the latter to have better chances to survive to a zombie attack and also evaluated the original game's Chris to be "horribly ill-prepared".[29][30] Joystiq took a more humorous approach at his appearance, commenting that possibly during Resident Evil: Umbrella Chronicles Chris started his "steroid abuse",[31] which was also suggested by IGN[25] GameSpot even gave him the special award for "Character Most Likely to Fail a Performance-Enhancing Drug Test" in the "Dubious Honors" section of The GameSpot's Best of 2009, commenting: "the man is clearly a walking pharmacy of performance-enhancing drugs".[32] On the other hand, GameZone ranked Chris as fourth on a list of the top five "gaming gods" of 2008 for his looks, calling him "one gorgeous hunk" with "a killer body and dreamy good-looks".[33]

In 2009, GameTrailers made a video focusing on the his evolution across the series.[34] Game Informer also explored the meaning of Chris Redfield's name, wondering what his first name stands for.[35]