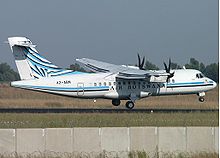 The 1999 Air Botswana incident occurred when Chris Phatswe, a Botswana airline pilot, committed suicide by crashing a plane into the tarmac and a group of aircraft at Sir Seretse Khama International Airport in Gaborone. His actions effectively crippled operations for Air Botswana.

On 11 October 1999, Phatswe commandeered an Aérospatiale ATR-42, registration number A2-ABB, from the Air Botswana section of the terminal at Sir Seretse Khama airport and took off. For two hours he circled the airport, radioing the control tower and announcing his intention to commit suicide. The airport was evacuated as a precaution; passengers later reported a good deal of panic in the terminal. Officials in the tower expended a great deal of effort in an attempt to convince him to land; efforts were led by General Tebogo Masire, then deputy commander of the Botswana Defense Force.

As the craft began to run out of fuel, Phatswe threatened to crash it into an office building belonging to Air Botswana; he said that he wished to settle a grudge with the airline's management. He demanded to speak to Ian Khama, Botswana's vice-president, and was about to be put through to him when the plane ran out of fuel. His demands were never made clear. Later reports suggested that he had also threatened to crash the plane into the residence of President Festus Mogae.

Officials in the control tower told Phatswe that there were people in the Air Botswana building, whereupon he crashed the stolen plane into two other ATR-42s sitting on the tarmac. All three planes were destroyed in a fiery crash, and Phatswe was killed. He was the only casualty.

The three planes were the only operational craft then in the Air Botswana fleet; a fourth plane, a BAe-146, was grounded with technical trouble at the time. Consequently, Phatswe's actions effectively crippled operations for the flag carrier.

Phatswe had repeatedly threatened airport authorities, telling them that he would kill himself, but never gave a reason. At the time of the incident he was on medical leave from the airline, having failed a physical two months previously and been declared unfit to fly; consequently, he was not authorized to take the plane. Airport security was reported to be lax, and it was said to be quite easy for somebody to steal an aircraft.

It was later revealed that Phatswe had AIDS, although what part this may have played in his actions is not known. Prior to his medical suspension, he had been coordinating safety operations for the airline.